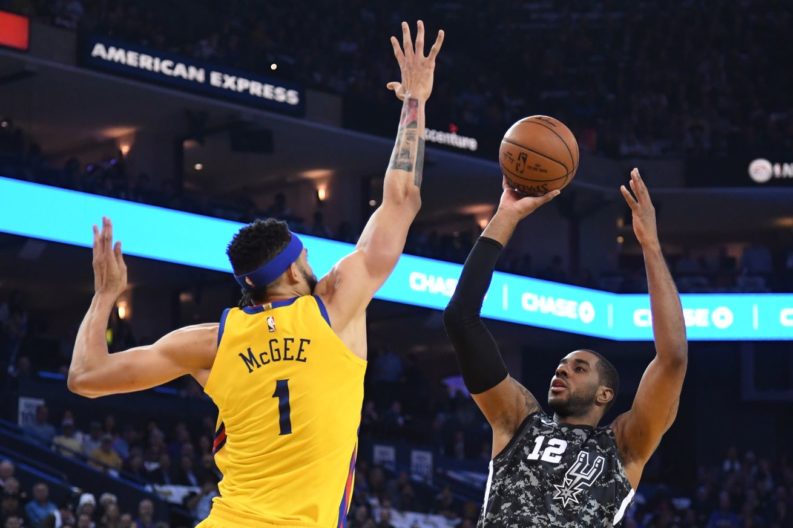 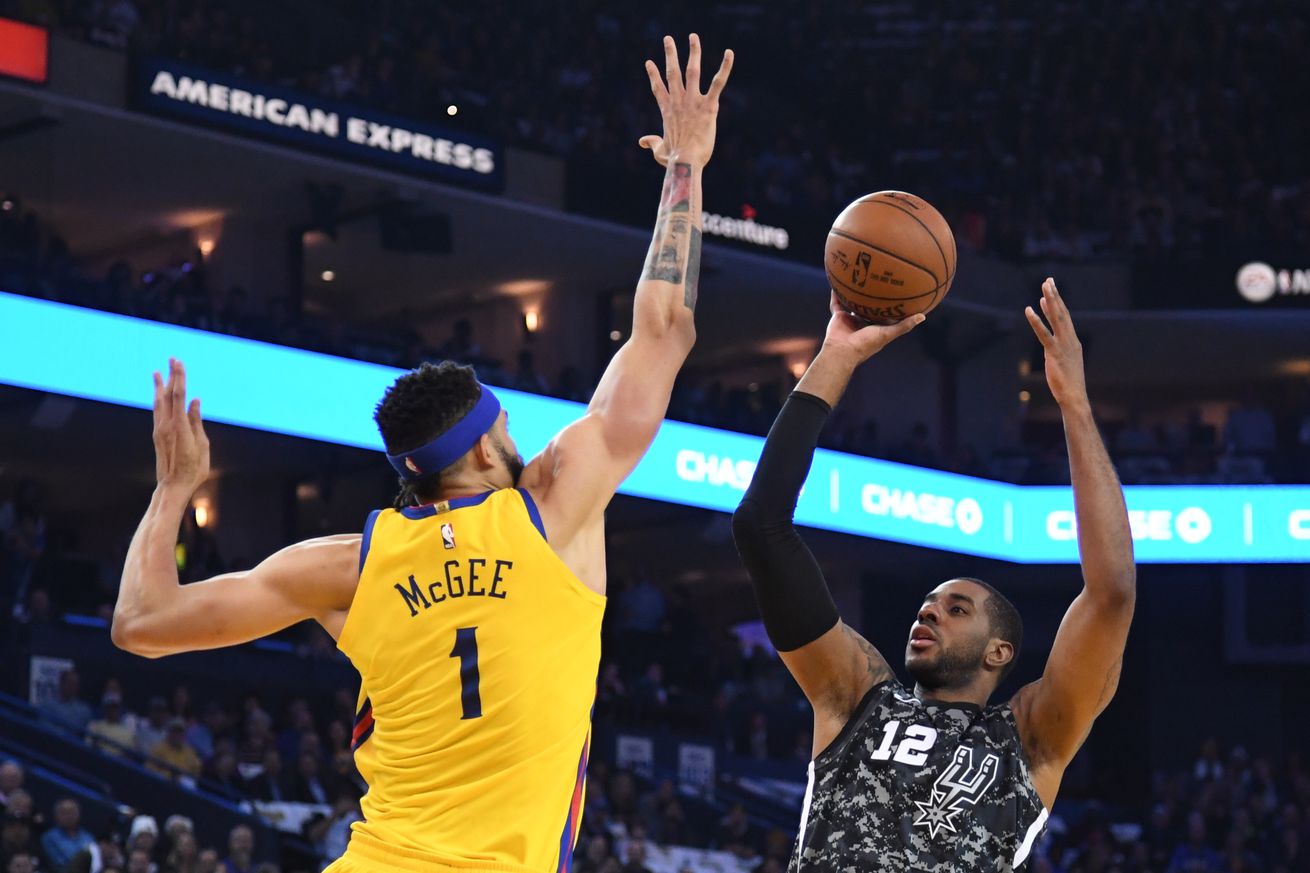 The Spurs once again lost a big fourth quarter lead as the Curry-less Warriors took over the game late.

With Steph Curry leaving the game early with an ankle injury, the Spurs were able to stay in the game and led by 8 halfway through the fourth quarter led by LaMarcus Aldridge’s scoring and Kyle Anderson’s defense. But Kevin Durant took over in crunch time and dominated the game as the Warriors closed the game on a 17-6 run and the Spurs lost after leading late again.

Mills started off the scoring for the Silver and Black with a triple, and after a few scoreless minutes, Curry was fouled on a drive to the basket and hurt his right ankle, but hit a pair of free throws. Stephen left the game, but the Golden State was stout, but the Warriors could not hit shots as the score was tied at 9 halfway through the quarter. JaVale McGee gave the lead to the Warriors with an emphatic dunk on Davis Bertans off a behind-the-back assist from Klay Thompson. The Warriors built a 9 point lead with interior baskets and points off Spurs turnovers. A fast break finish from Omri Casspi gave them their biggest lead at 28-19. A pair of free throws from Rudy Gay at the end of the quarter made the score 28-21 in favor of the Warriors at the end of quarter one.

The driving lane to the basket was open for the Warriors as they started the second quarter but Kyle Anderson kept the Spurs in it by poking the ball away and getting open shots with funky slow-motion moves in the lane. Davis Bertans cut the lead to 3 on a breakaway dunk and the Spurs were back in the hunt. After a few exchanges of baskets, the Spurs took the lead on a LaMarcus Aldridge hook shot. The Spurs pushed the lead to 5 with a Bertans 3, but the Warriors came right back with McGee to tie the score at 43 with just under three minutes left. The final minutes of the half were intense, but the Spurs led 50-46 after the first 24 minutes.

Draymond Green hit an open three-point shot to start the second half scoring. Dejounte Murray had the answers with baskets in the paint, but the Warrior defense with McGee sending shots back, kept it close. Kevin Durant tied the game at 60 with a pull up jumper in transition, leading to a Gregg Popovich timeout. Bertans and Durant swapped triples and the two teams played even despite Pop putting in a tiny lineup with Patty Mills and Tony Parker at the guards. The Spurs led by 5, but the Warriors fought right back with Nick Young making shots to tie it at 78 late. The Spurs scored the last 9 points of the quarter in just over a minute to lead 87-78 after three.

The Warriors started the fourth on a run with a 6-0 run to cut the lead to three. Rudy Gay stopped the bleeding with a midrange jumper, while the Warriors kept up the heat with Klay Thompson scoring for the team in gold. Kyle Anderson finally got the Spurs in front with a nice basket off a Dejounte assist, and then stealing the ball from Draymond and feeding it to Dejounte for a dunk to give the Spurs an 8 point lead with just under 5 minutes left. A deep three from Durant cut the lead down to 5 but LaMarcus answered immediately with a shot in the paint. Durant scored the next 5 for the Warriors on three freebies and a jumper from the wing to cut the Spurs lead to two with 3 minutes on the clock. Durant tied it up at 105 with 2 minutes left, and Green gave the lead to the Warriors on the next possession with a banker off an offensive rebound. The Spurs had chances to tie it up in the last minute, but players passed up open shots and when they were finally forced to take one, they missed. But the Spurs still had a shot, with LaMarcus being fouled on a three-point attempt with 3 seconds left and hitting two of three to pull the Spurs to within a basket. Durant was fouled on the inbounds and hit one of two and the Spurs were down by three with 2 seconds left. Bryn Forbes got a wide open look at the buzzer, and he missed, and the Warriors won 110-107.

Some elite level D by DeJounte here. Helped just enough to impede Klays drive, then recovered/contested/didnt foul. Why his length is so valuable. pic.twitter.com/LTS43YcExI

These late night games are hard to stay up for. How about some shoe gazer music to help you sleep?

The Spurs travel to Oklahoma City to face the Thunder on Saturday at 7:30 on ABC for the second game of the road trip of death against the most talented teams in the west. The Spurs current record is 37-28 and they are in 5th place in the Western Conference.