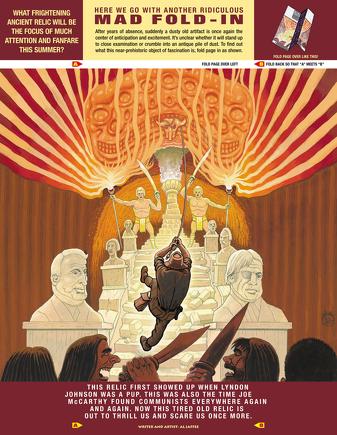 Print can do some really good things. There’s the ritual of browsing the local corner shop looking for something you fancy, the bizarrely thin paper that somehow smells bloody delicious, and front covers screaming at you to pick them up and give them a read. Walking past the magazine section at my local Asda, I got to thinking about all the super cool stuff made possible when you whack out the ol’ presses.

One that immediately sprung to mind was Mad Magazine and its fold-ins. They used to have this weird back page thing where the reader folds the page to change one image into another. They’ve been hand-drawn by Al Jaffee since the ’60s, and show two completely different scenes, telling a two-part story that will often subvert what you initially expected to see.

It might not be super deep, cutting satire – Mad’s brand is more pointing out the obvious. You have the question posed at the top of the page – ‘what frightening, ancient relic will be the focus of much attention and fanfare this summer?’ with an accompanying image of an Indiana Jones style adventurer in an ancient tomb. However, folding the page in obscures most of the image to reveal the words ‘John McCain’, along with a goofy looking bust of the former Presidential candidate (this fold-in was from 2008). The content is simple, but the presentation is brilliant. It’s like a game on the back of a magazine – a story is being told, and the reader is a part of it.

I got to thinking of how digital media can replicate the same feeling Mad’s fold-ins engender though. Some cool, creative stuff from games popped into my head. As a card game enthusiast, the art of Legends of Runeterra took hold, and I jumped back into Riot’s League Of Legends-based deck-em-up. In it, you play your selection of a giant number of spells, units, and powerful champions, and try to take the opponent’s health total to zero before they do the same to you.

The card art is done by SIXMOREVODKA, a German studio who specialise in concept art. Each card has a wonderfully detailed image of the unit or character in question, illustrating their general vibe – a cute little Poro has low stats, whilst the huge, muscle-bound Darius has a load of attack power and can blast through blockers with ease.

The bit that gets me is a layer deeper than that though. Say you have Darius. He’s a Noxian warleader and absolute juggernaut on the battlefield, with his Legends of Runeterra mechanics reflecting this. He’s a finisher, who can deal huge amounts of Overwhelm damage and kill the enemy through blockers. His card art shows a snarling, hard-as-nails guy holding his battleaxe close. His eyes peer off to the side of the frame, and it’s ambiguous as to his situation. But wait! Right-click the card to see the full art, and you’re treated to the fully-expanded picture of the same image. Darius’ stoic expression remains the same, but he’s surrounded by fire and death. He’s won the battle and lives to fight another day, believing the necessity of his actions, but takes no joy in the slaughter of which he is part.

The cards tell a story simply by altering your perspective on a single image. Legends of Runeterra’s unique framing of its art gives you no choice but to infer the story and build on the world in your mind. Darius sits in one position in a single image, but the wider perspective makes it so much more alive (unlike the poor guy in the bottom right there).

It’s not just Darius though. Fiora begins close up, swiftly in motion, eyes piercing. Open the full art and a whole other character is revealed, her ill-fated opponent in a duel. Her blade slices the grass beneath her opponent’s feet as he falls to the ground. There’s also Braum, whose giant moustache curls into his grin as he flexes his ludicrous pecs. The full image shows the rest of him – what it is that’s made him so happy – absolutely beating the breaks off a yeti.

It isn’t always a battle or intense scenario revealed either – Cithria of Cloudfield’s full card art zooms out to show you the sheer scale of her surroundings, dwarfing her already slight stature around the huge knights whose ranks she dreams of joining.

I love Legends of Runeterra. The cool stuff that’s hidden-in-plain-sight keeps me coming back, and I hope we see more digital media realise and harness the power held in the narrative devices popularised by print.