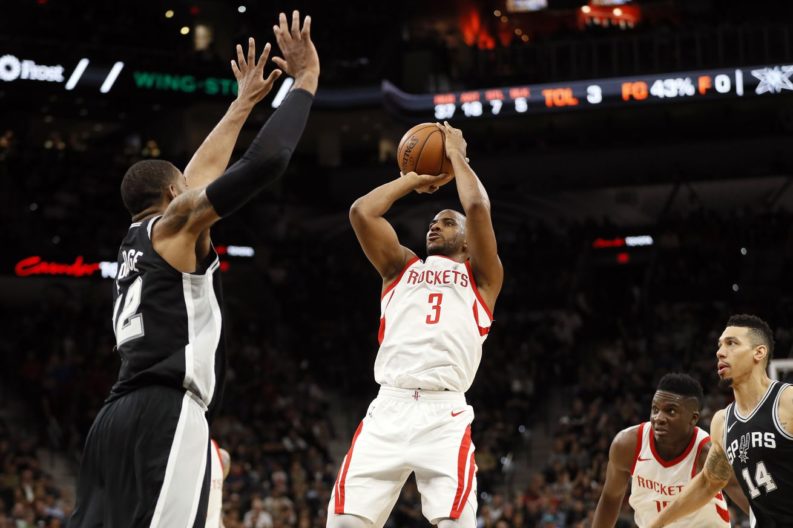 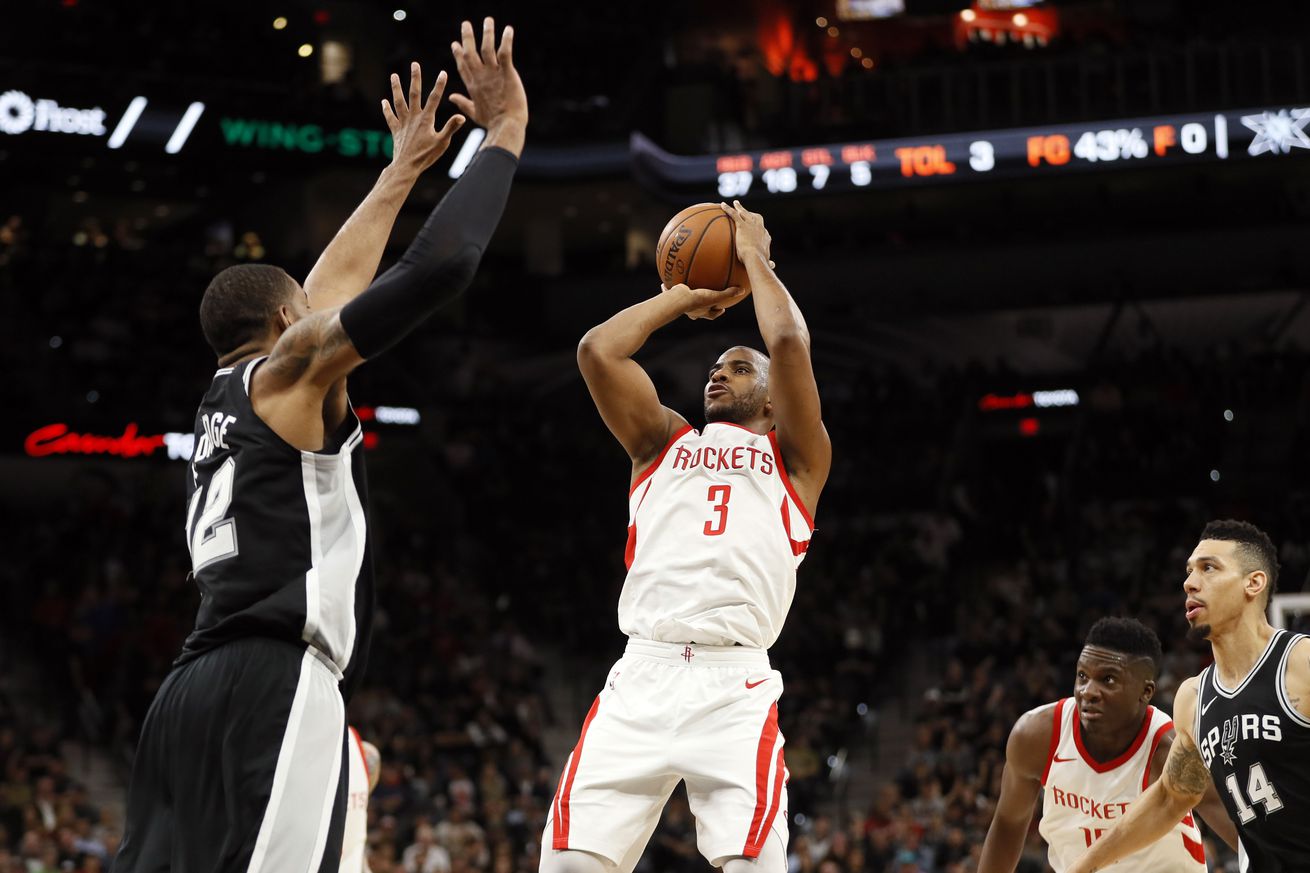 Houston’s two-headed point-guard monster came up big down the stretch, putting away a Spurs team that couldn’t overcome a slow start and sloppy play throughout.

Despite the national stage and its second-versus-third billing, there was little about Friday’s 102-91 loss to the Houston Rockets that served as a potential playoff preview — and plenty that showed where both teams are currently at.

The game’s most telling watermark may have come in its strangest stretch, which began at the end of the third quarter. On the court for the Spurs was their trio of players of a certain age — Tony Parker, 35, Pau Gasol, 37, and Manu Ginobili, 40 — joined by second-year undrafted guard Bryn Forbes and two-way contract Darrun Hilliard. The quintet had never played together before (and more than likely won’t ever again), and the mere sight of Hilliard, a garbage-time regular, was enough to make you wonder if Gregg Popovich was calling it an early night.

And yet the lineup spent six straight minutes on the floor together, helping trim a 19-point lead down to six, capped by a Harden-esque pull-up by Hilliard for his season-high fourth point.

That the comeback came through better ball movement and pace is why multiple Spurs were able to focus on positives following the loss. Here’s Gasol on the improved play in the second half:

“We did a good job [in the second half] of starting to move the ball and understand that ball movement allows us to penetrate better and break down defenses. We can’t do it on the dribble; it’s gotta be with passes and attacking close-outs.”

Injuries and poor starts — like the 27-14 first quarter on Friday — have forced the Spurs coach to play the part of alchemist more than he’d like, seeking out the unconventional configurations that might find success. It’s partially why second halves have been so much kinder to them than firsts in 2017-18 and primarily why losses like these can only sting so much.

In contrast, things with Houston already feel plugged into a formula — the forty-something three-point shot attempts; the 48 minutes of Paul or Harden orchestrating the offense; the truncated lineup rotations and countless pick and rolls they put their defenders into, knowing that a sliver of daylight will eventually emerge for another drive or long-distance bomb. D’Antoni is willing to abide the lower-efficiency post-up looks on the other end, even if it’s LaMarcus Aldridge or Pau Gasol backing the smaller James Harden down.

And the math seemed to get the better of the Spurs in the first half. Despite Pop throwing some of his longest limbs at James Harden, the league’s best isolation player had little trouble creating his own looks, making his first five field-goal attempts on the night. The team hit 8 of its 19 three-pointers in the first half, with each attempt temporarily sucking the air out of the lungs of everyone in the AT&T Center, while the Spurs struggled to hit the few looks they were able to create for themselves from deep.

In the end, though, it wasn’t the numbers in D’Antoni’s head that mattered so much as the names on his players’ jerseys. Paul immediately doubled the deficit from six to 12 through a string of mid-range jumpers, while Harden’s singular talents would do the same thing a few minutes later, as the MVP frontrunner scored seven straight points after a Forbes jumper closed the lead to seven.

For the sake of this rivalry, and where it’s going, the names that weren’t on the floor matter, too. The Rockets were without super sixth man Eric Gordon, while the Spurs were once again missing Kawhi Leonard and Rudy Gay, two pieces who certainly would’ve helped a listless San Antonio attack. It’s the kind of context that matters, no matter the result, to Pop, who saw growth in the loss:

“You wanna improve every game — it doesn’t matter who’s on the court. You wanna do things fundamentally sound and what’s best for your group. That’s why I was pleased with the ball movement in the second half compared to the first half. The pursuit and the progressiveness was great and, you know, in the end, a couple of great players hit shots… that’s talent taking over and that doesn’t bother me at all.”

Danny Green, once upon a time a fifth offensive option (at best), led SA in shot attempts (18) and points (22); point guard Dejounte Murray led the team in rebounds (again) with 11; no Spur had more than three assists. These kinds of numbers are emblematic of a team that’s just trying to get by while it returns to full health.

When Green was informed of a personal milestone — that he set a “weird” career-high number of two-point field goals — he remarked:

“That is a weird stat. Hopefully it keeps going.”

Gasol took just one shot and had just one assist on the night, but his sheer size remains important in how the Spurs defend and funnel Rockets ball-handlers into the paint. The fact that the Spaniard had one of the better plus-minuses on the team, despite a lack of offensive production, speaks to the impact he has on the defensive end.

Murray had some bright moments driving into the paint on top of his usual contributions on the glass. He also did a good job of hanging with Paul in the pick and roll and recovering in time to disrupt his shot.

Do with this what you will, but per Pop:

“He gets closer everyday.”