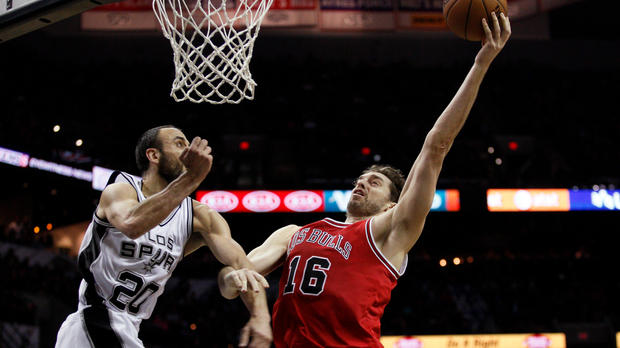 It looks like the San Antonio Spurs are going to be contenders again next season. While Tim Duncan’s decision about retirement is still up in the air, The Vertical’s Adrian Wojnarowski reported that Manu Ginobili is likely coming back and Pau Gasol could be joining him.

“There’s a strong belief that Manu Ginobili is probably going to play another year,” Wojnarowski said on The Vertical podcast with Chris Mannix. “I think he’s not tying himself to Tim, what Tim does. It’s not like, ‘Hey we’re going to go out together.’ I think Manu feels — if he feels like he has more in him, he’s going to play.”

Ginobili will turn 39 in a month, and he’s going to play for Argentina at the Olympics in Rio. He officially opted out of his $2.9 million salary for next season, but that was just a formality. He averaged the fewest minutes of his career this past season, but was still effective as a playmaker and shooter off the bench.

Gasol is reportedly done with the Chicago Bulls, and San Antonio has always seemed like a natural landing spot for him. He’d be a perfect fit with the Spurs’ style and system, whether Duncan is in the lineup or not…Read More

Source: Report: Manu Ginobili likely to return and Pau Gasol could join him with Spurs – CBSSports.com