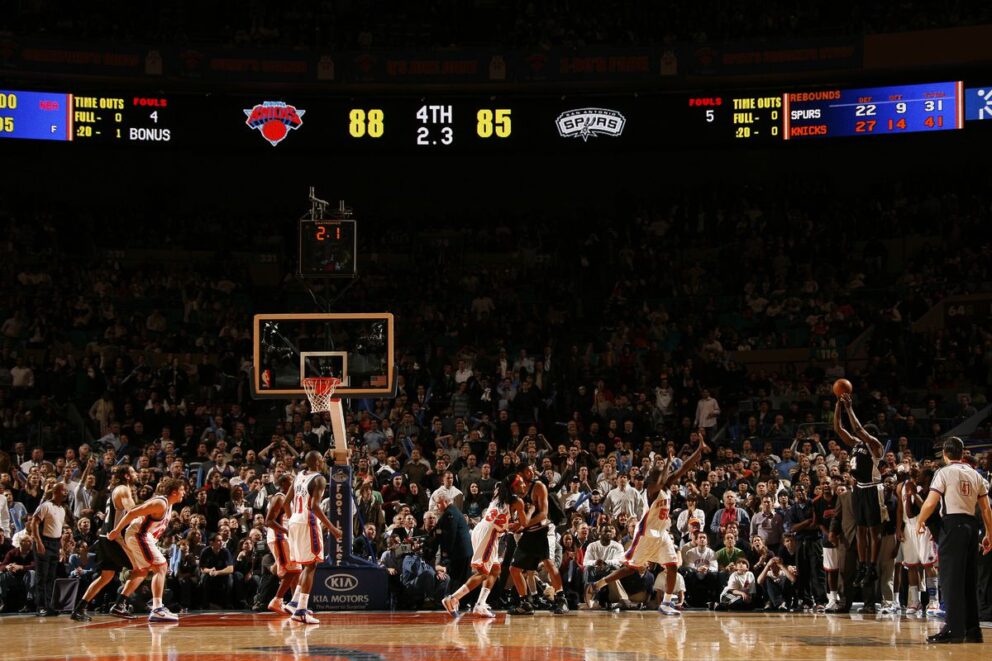 As I’ve mentioned before, I used to live in Brooklyn. In that time I attended many events at Madison Square Garden. A pair of Foo Fighters concerts, AC/DC, the Garden of Laughs benefit featuring Ray Romano, Wanda Sykes, Robert Klein, Darrell Hammond, and Adam Ferrera, and one killer overtime Spurs game hosted by the New York Knickerbockers.

February 8, 2008. The Spurs loaded in to Madison Square Garden. As a Christmas gift, my father-in-law had bought my wife and I tickets. We were behind the basket just a few rows back on the Knicks side. Best seats I’d ever had, hands down.

A slow start by both teams led to San Antonio leading at the end of the first quarter by a score of 18-17. But the Knicks would improve vastly in the second quarter, scoring 31 to the Spurs unfortunate 14. The Spurs headed into their locker room down 32-48. Tim Duncan and company would spend the next 24 minutes digging themselves out of a hole. They came out of halftime and took charge, outscoring the Knicks in the 3rd quarter 27 to 14.

Going into the final frame, the good guys were still down by 3. And that 3 was significant as the Spurs would close within one, go down by six, close within three, back down by 5. For a significant portion of the last twelve minutes, the difference was 3. And it was about to end that way, until Michael Finley buried a corner 3 with 0.4 left in regulation.

I looked for the clip, but could not find a highlight anywhere, just the shot above which is not too far off from my actual vantage point.

All I remember was watching the ball rotate out of his hands. From my end of the court, it was a straight shot and I could tell right away it was good. I jumped out of my seat and into the air with my arms extended. As I landed and looked around I noticed I was the only audience member impressed. For a second, I was the sole celebratory fan in Madison Square Garden. I alone was clapping and hollering while a bevy of New Yorkers grumbled.

That in itself was a unique experience. Nobody to share in my jubilation. But I was not deterred. Fully invested, I cheered on as Tim Duncan broke the ice in overtime, Manu added to the lead before Finley hit yet another 3. Jamal Crawford hit a couple of jumpers for the Knicks before Ginobili sank four more free throws and the Spurs stole a win in New York. Had it not been for Michael Finley, I would not have been able to tell people I saw the Spurs in Madison Square Garden. He made it a story.