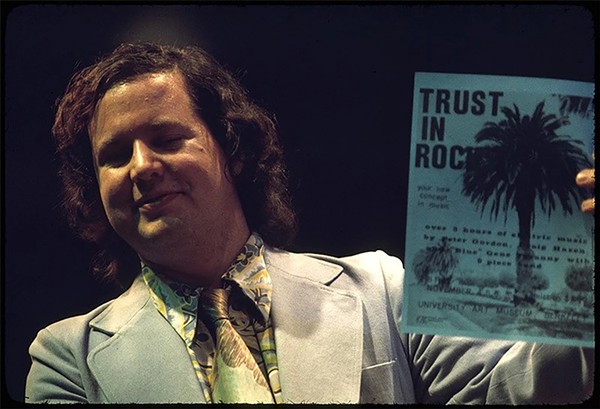 “Blue” Gene Tyranny, a San Antonio native recognized as one of the most talented musicians and composers of the 20th century, died last month without the fanfare usually reserved for such a passing.

A musician’s musician, a legend of downtown New York’s experimental scene, a gifted keyboardist and prolific post-modern composer, Tyranny passed away December 12 due to complications from diabetes. As a collaborator with Laurie Anderson, Iggy Pop and Robert Ashley, Tyranny’s music spanned genres and decades.

“One of the most important creative figures of his generation,” the critic Nicole Gagne wrote of Tyranny’s work.

His output and influence, among those who know, is staggering. Tyranny was a significant figure in modern American composition. His legacy is his music, much of which is still being discovered.

“Because he’s been very good at helping people sound their best — from Robert Ashley and Laurie Anderson, Iggy Pop — it can make it hard for [his] own personality to be sufficiently distinct,” Gagne also wrote.

Tyranny, who was born Robert Sheff, attended Jefferson High School in the late ’50s, where he wrote arrangements for the school orchestra and the three school choirs. As a young teen, he studied with Frank Hughes at Trinity University, where the music of American mavericks Charles Ives and Harry Partch opened his ears to new approaches. Together with fellow San Antonian Phillip Krumm, he organized DIY experimental concerts at the McNay Art Institute, premiering original scores from such notaries as John Cage, Yoko Ono and Phillip Corner.

After receiving a BMI composition prize, Blue was accepted to NYC’s prestigious Juilliard School at age 16. The school’s stifling atmosphere turned him off, though, and he headed to Ann Arbor, Michigan, where he rejoined with Krumm and took part in the legendary ONCE group, whose festivals attracted the likes of Robert Rauschenberg, Claus Oldenburg, John Cage and Morton Feldman.

In 1965 he formed the Prime Movers Blues Band with a pre-fame Jim Osterburg, later known as Iggy Pop. Tyranny subsequently joined the Stooges for their Raw Power tour, during which he adopted his pseudonym “Blue” Gene Tyranny, playing keys while wearing full glam regalia and blue LEDs in his hair.

It was in Ann Arbor that Tyranny met perhaps his greatest collaborator, Robert Ashley. Ashley started the Center for Contemporary Music at Mills College — formerly known as the SF Tape Music Center — and hired Tyranny as instructor and studio engineer. The studio there was “open access” — revolutionary for the time. Mills College was, and remains, a central hub of avant-garde music.

Towards the end of the ’70s, Ashley received commissions, initially from NYC’s famed The Kitchen, and later from London’s Channel 4, to compose one of the great works of 20th century intermedia new music: Perfect Lives, a seven-part opera for TV that obliterated genre and took the composing world by storm. Tyranny wrote all of the music.

“Who needs the Bible?” John Cage said of the composition. “We have Perfect Lives.”

In the ’80s, Tyranny moved to New York City, where he became a fixture of the downtown music scene, winning composition awards and residencies and providing soundtracks to more than 40 films.

He was also quietly devoted to gay rights, dedicating pieces to the first openly gay football player David Kopay and also to Harvey Milk. He lost his sight in 2009, just as reissues of his music reached a new generation of listeners.

Tyranny was known for his remarkable piano technique and compositions combining rock, pop, classical, and the avant garde.

He was the embodiment of the post-modern composer — unshackled from the boundaries of genre and orthodoxy, fluent and masterful, fusing music with elements of sound art, spoken word, video, and philosophy to create a singular vision.

He was among the first generation of composers, post-Cage, to forge a new paradigm.

“You didn’t have to write like John Cage or believe in indeterminacy… he freed us,” Tyranny once said.

Need proof? Listen to Out of the Blue, recently reissued by NYC’s influential Unseen World label. He filters ’70s pop through post-modern classicism with heart-melting results.