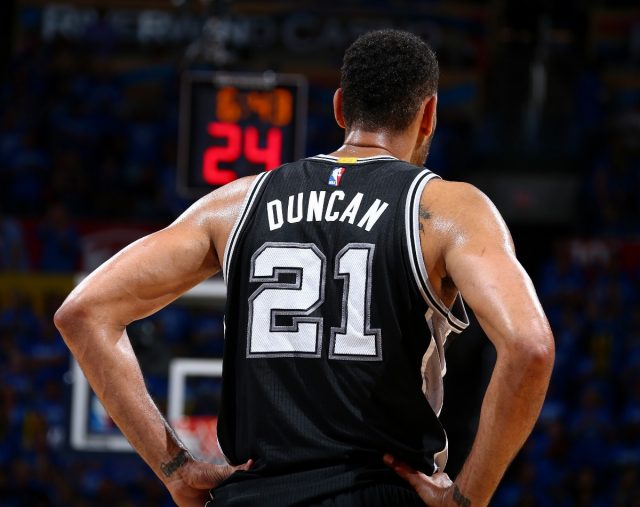 While the rest of the basketball world watched with morbid curiosity, San Antonians were afraid to look. Tim Duncan’s career, for all its boring glory, may have reached its end, leaving a sadness in and around town that is difficult to explain. We ignore the possibility that it’s all over, and put on our bravest face. The homegrown Texan machismo flowing coursing through our veins demands it — but the fear is there nonetheless.

There are San Antonio Spurs fans all over the world and the respect for Tim Duncan is almost universal. To suggest that “outsiders” won’t miss his play is foolish, but his seemingly imminent departure will leave a lasting and painful void in a city whose circadian rhythm — and its very identity, in fact — is tied to its basketball team. And no one has been more responsible for that relationship than the “Big Fundamental.”

It’s only fitting that Duncan’s birthday falls on April 25, because in San Antonio, April is the best — and most historically significant — time of year. April is when the Battle of San Jacinto took place in 1836, where cries ofRemember the Alamo! rang out while Sam Houston defeated, captured and negotiated the surrender of Mexican General Santa Anna. That victory secured Texas’s independence and avenged what was an infamous and horrific slaughter at a rural San Antonio fort some week prior.

April in San Antonio also means Fiesta, an event started in 1891 to honor the heroes from the Alamo and San Jacinto that has now blossomed into a two-week, multi-million dollar festival. 2016 marks the 125th anniversary of what has become Central Texas’s biggest party…..Read More

Source: Remember The Alamo! — And Remember Tim Duncan — The Cauldron