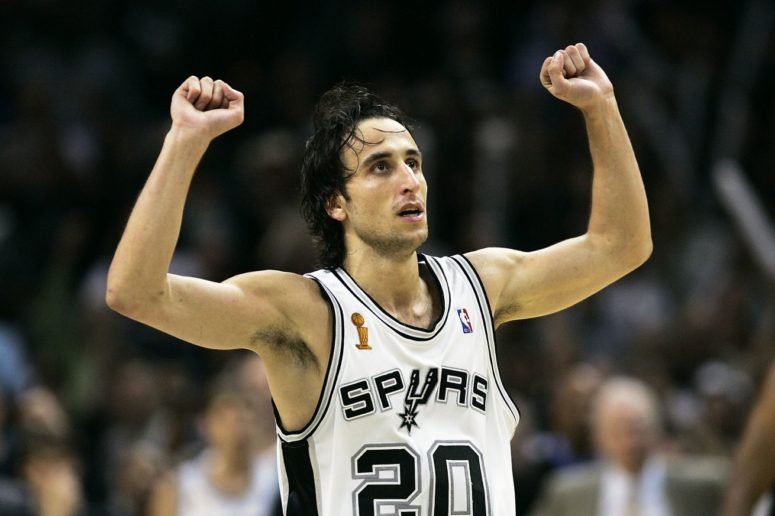 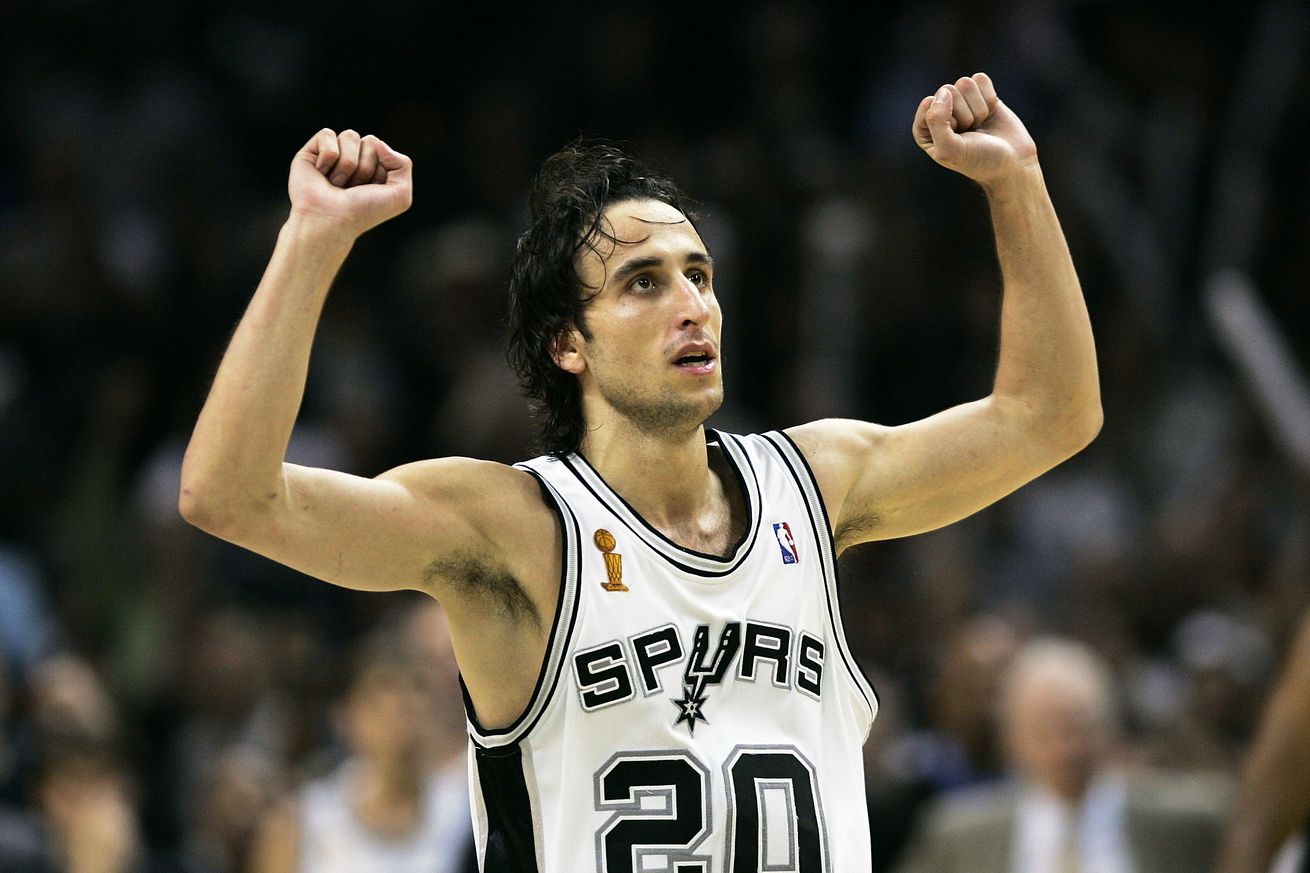 With another year in Silver and Black certain, here’s a look back at the year Manu laid waste to the playoffs.

Watching Manu Ginobili play in a minimized role for the last five years, it’s possible to forget just how dominant he really was.

He has remained efficient, but he’s no longer crushing the dreams of opposing players with unpredictable euro steps and relentless attacks to the rim. He hits a clutch three here, makes a great pass there. But like Timmy, his familiar veteran presence and overall aptitude for the game is his true value.

Now that he’s announced his return to the Spurs and we’re likely facing his final season, I want to reflect on a time when his hair was triumphantly long and his 27-year-old legs were spry; when he could lose defenders with mind-busting crossovers; when, at his most aggressive, he sprinted directly into his enemies’ chests, scoring in their faces and splattering floppy-hair sweat into their eyes.

The 2005 NBA Playoffs was the finest and most consistent display of Manu’s talents. That regular season, his third in the league, he came into his own as an all-star. He jumped from 12.8 points per game the previous season to 16 per game. In the playoffs, he jumped to 20.8 points per game, the highest playoff scoring average of his career. He also earned his spot as the primary bench facilitator after Pop pulled him from the starting lineup to distribute the offensive output.

Aside from the fact that he shot with deadly efficiency –- a playoff career-high 50.7 percent –- he did it with his trademarked flair. Everything in Manu’s toolkit worked. His eurosteps were long and impossible to guard unless someone was whacking him in the face. His high-low passes to Tim Duncan and Nazr Mohammed were impeccably timed and delivered before defenses could react. And his array of behind-the-back moves and crossovers wiggled him free from double teams even as they appeared to have him dead to rights.

I’m going to highlight one definitive game in each series that shows Manu’s overall dominance with the ball in his hands. It’s important to note that Manu follows one basic tenet through the entire playoff run: graphic R-rated aggression.

Manu earned his “tick off George Karl” scout badge after leading the Spurs to a game 3 victory with 32 points off the bench. He almost did it by himself, as the next highest scorer, Robert Horry, put up 13.

Karl was mostly agitated by the fact that Manu was an extremely strong piece of spaghetti who ran directly into his players with the force of 1,000 stampeding bison.

“I guess that’s a new brand of basketball,” Karl said in ESPN’s game coverage. “It’s not very pretty. He just goes in there and throws his arms up in the air and throws his elbows at us. He hits you as much as you hit him.”

When Timmy picked up two fouls less than four minutes into the game, the Spurs looked like they were in trouble. Then Manu walked off the bench and individually asked every single person in Denver’s Area to sit in perfect monk-like silence. He scored 11 points in seven first-quarter minutes, and 19 in the half.

Because of his aggression, 10 of his points came off six trips to the free throw line.

Manu scored the most playoff points in his career, 39, against Ray Allen’s Sonics. After coming off the bench previous eight games, he was back in the starting lineup. And he celebrated by turning into the basketball version of Rambo with a belt-fed machine gun.

He finished 10-for-15 from the field, including four three pointers, which is essentially the same as hitting seven three pointer’s in today’s NBA. He also attacked everything that moved, getting to the free throw line eight times for 15 points.

The shots forced Seattle to cover him on the perimeter, leaving wide-open driving lanes. That led to Manu and Nazr Mohammed scoring the team’s first 24 points of the third quarter. It also led to some particularly Manu-esque sequences.

With four and a half minutes left in the game, and the Spurs up by 12, Ray Allen and Danny Fortson double-teamed Manu in a last-gasp defensive effort by Seattle. Ray Allen got caught up in a Tim Duncan screen, and, with Fortson guarding Manu’s left side, Manu split them with a viscous around-the-back dribble that crossed everyone’s eyeballs.

Damien Wilkins then smacked him in his handsome face and sent him to the free throw line.

First off, this game was incredible. It was classic Big 3 versus Steve Nash and Amare Stoudemire, trading blows until the finals seconds ticked off the clock. Manu, Tim and Tony accounted for 80 of the Spurs’ 111 points. Tim scored 30, Manu 26 and Tony 24.

This game, more than all others in series, showed Manu’s ability to “turn it on” when it mattered most. He wasn’t particularly exciting on offense until the final two minutes of the game.

After a back and forth affair for most of the second, third and fourth quarters, Manu had the ball on the right wing with just under two minutes to go and the Spurs up one. Defended one-on-one by Shawn Marion, he drove left then fluidly switched over to his right hand behind his back. With a better angle to the basket, Manu used the left side of his body to create distance between him and Marion and slithered the ball in the hoop.

I truly believe Manu is the only non-superstar who would ever attempt this type of move, one-on-one, in the critical moments of a conference finals. It’s like doing a summersault in the middle of a street fight.

The following possession, Manu casually hit a dagger step-back jumper. He probably had plans that night.

This game is a personal favorite for obvious reasons, and some not-so-obvious. Manu’s hair had been growing out all playoffs, and it was the perfect length for the slow-motion cameras to capture his intensity. But aside from his impeccable physical appearance, Manu flat-out balled.

Every 3-pointer, every eurostep and every dunk was compounded by the intensity of the series and the game (and accentuated by Al Michaels’ voice). The defensive contest felt deadlocked throughout, broken only by spectacular, emotional plays. We now know these are the exact moments Manu relished throughout in his career—the moments that molded him to an ironclad hero of the Alamo city.

With about a minute left in the third quarter, Manu drove hard along the baseline, looked Ben freaking Wallace dead in the eyes and jumped in the air for what seemed like 30 full seconds. His subsequent dunk (one of those scream-at-the-TV-until-your-forehead-vein-pops-out dunks) knotted the game at 55.

With Tony struggling, most of the offense flowed through Tim and Manu. And they had no problem closing it out together.

In one of my favorite overall Spurs moments, with less than three minutes to go in the fourth quarter, Tim caught three defenders digging down on him in the post. He dished to an open Manu for a huge momentum-building three pointer.

The shot translated to one of the most iconic images of our beloved Argentine: two clenched fists in the air, dead-faced, hair floating like smoke behind him.