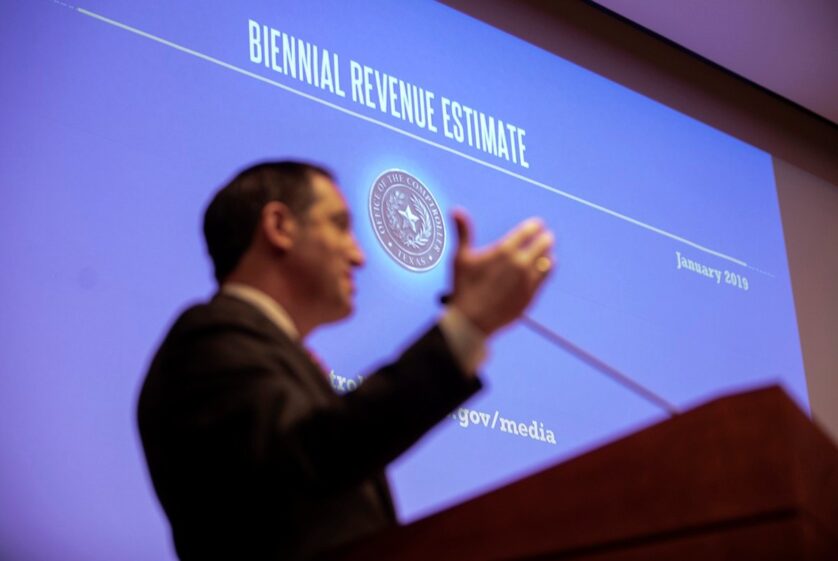 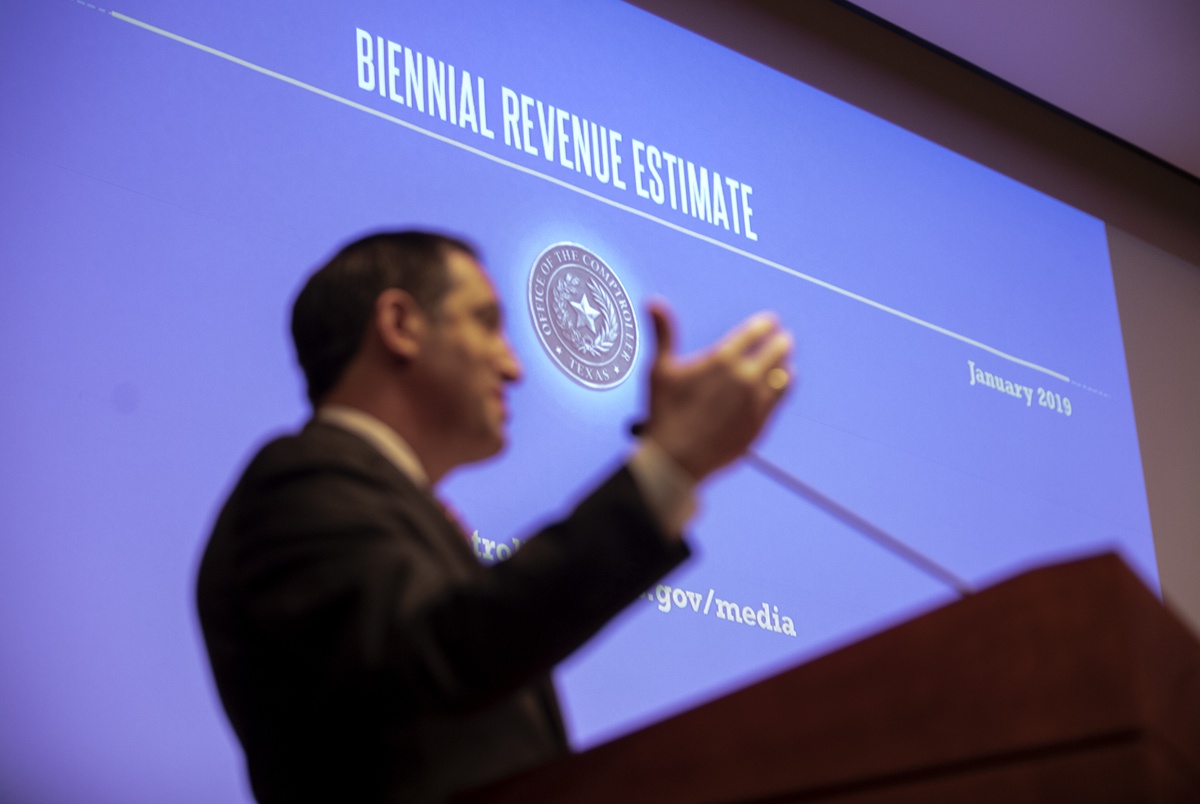 Texas lawmakers will enter the legislative session this week with an estimated $112.5 billion available to allocate for general purpose spending in the next two-year state budget, a number that’s down slightly from the current budget but is significantly higher than what was estimated this summer when the coronavirus began to devastate the economy.

Texas Comptroller Glenn Hegar on Monday announced that number in his biennial revenue estimate, which sets the amount lawmakers can commit to spending when they write a new budget this year. But he acknowledged that Texas’ economic future remains “clouded in uncertainty” and that numbers could change in the coming months.

Hegar also announced a nearly $1 billion deficit for the current state budget that lawmakers must make up, a significantly smaller shortfall than Hegar expected over the summer. That number, however, doesn’t account for 5% cuts to state agencies’ budgets that Gov. Greg Abbott, House Speaker Dennis Bonnen and Lt. Gov. Dan Patrick ordered this summer or any supplemental changes to the budget lawmakers will have to make.

Hegar’s estimates portend a difficult budget-writing session for lawmakers. But Hegar acknowledged that things could have been a lot worse. The $112.5 billion available is down from $112.96 billion for the current budget.

More than 29,000 Texans have died from COVID-19 since March, and one out of five hospital beds in Texas are occupied by COVID-19 patients, underscoring the sustained severity of the virus. As a result, business across the state has been disrupted — more than 4 million Texans have applied for jobless relief during the pandemic, including more than 43,000 unemployment applications filed with the Texas Workforce Commission over the course of the week between Christmas and New Years.

The Texas unemployment rate was 8.1% in November, the most recent month for which numbers are available in Texas. That is up from 6.9% in October. Economists have said there will not be a strong economic recovery until the coronavirus is contained, but lawmakers will move ahead anyway to attempt to write the budget during an economic recession that has dragged on for nearly a year.

With nearly $1 billion less to work with compared to the 2019 legislative session, lawmakers could tap the Economic Stabilization Fund, also called the rainy day fund, which is funded mostly through crude oil and natural gas production taxes. The economic recession and oil crash in the 1980s led lawmakers to create the fund — there will be $11.6 billion in the fund for lawmakers to use if they choose to do so.

“Comptroller Hegar’s revenue estimate this morning offers both bad and good news,” Dale Craymer, president of the Texas Taxpayers and Research Association, which represents businesses on fiscal policy. “The pandemic and the associated impact on state revenues means Texas faces budget challenges at the very time Texans may need government help more than ever; however, the numbers are manageable.”

The $1 billion deficit, Craymer noted, is significantly less than the $4.3 billion one lawmakers dealt with in 2011 — and lawmakers have more money in the rainy day fund this time around.

As lawmakers think about short-term solutions to the economic calamity related to the coronavirus, Hegar wrote over the weekend that they must also think about long-term planning to eliminate “burdens on future generations.”

“Moody’s considers 203 of our 254 counties at high risk for scarce water resources, a risk mitigated through Texas Water Development Board water financing programs,” Hegar wrote in a column published in the Dallas Morning News. “Hurricanes pose a persistent threat in counties that contribute a third of Texas’ gross state product. … Our rate of uninsured people, among the nation’s highest, and high poverty rate present more long-term challenges. And more than 2 million Texas households don’t have high-speed internet, increasingly an essential requirement for education and work, especially in the wake of the pandemic.”

“Tough decisions remain, but I am confident we can pass a budget that meets our essential needs, maintains our commitment to education and follows the principles of fiscal responsibility that put us in a stronger position than other states to withstand this unprecedented pandemic,” Nelson said in a statement.

Eva DeLuna Castro, who oversees fiscal and budget policy at Every Texan, said Hegar’s estimate on Monday was “better than expected.”

“It’s very likely, though, with so much uncertainty, that in 2023 we may come back and things still aren’t recovered fully,” she said. “The past two recessions, it’s been like 40 months before Texas got back to where it was before the recession came along, and that is a long time to not have revenues keeping up with existing demands and then new things created by these dire economic circumstances we’re in the middle of.”

Disclosure: Every Texan has been a financial supporter of The Texas Tribune, a nonprofit, nonpartisan news organization that is funded in part by donations from members, foundations and corporate sponsors. Financial supporters play no role in the Tribune’s journalism. Find a complete list of them here.