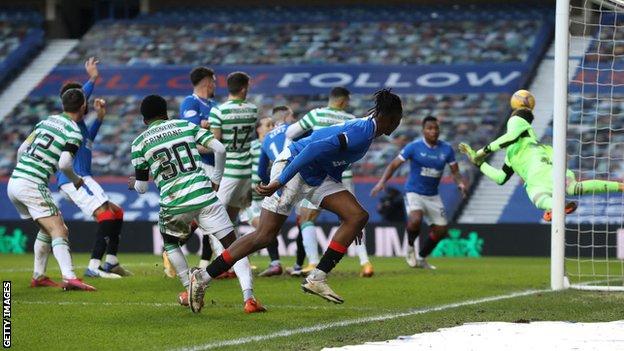 A Nir Bitton red card and a Callum McGregor own goal within eight second-half minutes inflicted a potentially decisive blow to Neil Lennon’s hopes of his side clinching an unprecedented 10 titles in a row.

Celtic dominated the early proceedings, but now sit 19 points behind their peerless rivals going into the second half of the campaign.

Steven Gerrard’s Premiership leaders – who have yet to lose a league game this season – have played three matches more, but are now in a formidable position as their campaign goes into the new year.

The prelude to this one was compelling. Rangers on their best start to a domestic campaign since 1928, while Celtic – on a resurgent turn of form – clinging on to their 10-in-a-row hopes by their fingertips.

Yet on a day of great sporting consequence in Glasgow, there was more than a tinge of irrelevance to what was about to take place on the pitch.

Before kick off, Rangers icon John Greig and Celtic chairman Ian Bankier stepped into the crisp air outside the Bill Struth Stand to lay wreaths in memory of the Ibrox disaster 50 years ago to the day.

Sixty-six Rangers fans never returned home that day after being killed in a crush on Stairway 13. Nearly half of those who perished were under the age of 20.

When the football commenced, Celtic began as a team who knew their season potentially hung on its outcome. Sixteen points behind – albeit with three games in hand – there was no margin for error in the face of a relentless Rangers.

Driven by Callum McGregor – captain for the day with Scott Brown dropped to the bench after starting the past 30 Old Firm games – Celtic looked insatiable as they marauded forward at will.

In their way stood an inspired Allan McGregor, who denied Odsonne Edouard early on and Leigh Griffiths soon after. Yet, it was his incredible one-handed save on to a post to deny the latter once more, that made you think this was not going to be Celtic’s day.

Rangers appeared overwhelmed and on the back foot, yet half-time arrived with the game goalless. Celtic were the better side, but crucially had nothing to show for it.

Gerrard introduced Ianis Hagi for Kemar Roofe at the break and slowly Celtic’s hold weakened. Then came the crucial moment.

There were 28 minutes still to play when a ball was played down the Rangers right. Alfredo Morelos managed to turn Bitton 30 yards from goal, and the Israeli hauled him to the ground. Kris Ajer was attempting to cover, but a red card was shown, and Celtic wilted further.

Eight minutes later, the game was done. A whipped corner was flicked on by Joe Aribo and Celtic captain McGregor was caught out, the ball rebounding off his shoulder and beyond the helpless Vasilis Barkas.

There was a meek response from Celtic, who introduced Brown and Mohamed Elyounoussi from the bench, the latter volleying on to the roof of the net.

Fireworks illuminated the Govan sky outside Ibrox at full-time as Celtic faded within it. There was no way back for the defending champions here. It is looking even harder to see it in the title race.

Man of the match – Allan McGregor

What did we learn?

Rangers have form in derbies at this time of year with victory in the past two, only for both of those to turn into false dawns with Celtic kicking things up a gear in the second half of the campaign.

Yet, there is a different feel to their latest victory. Their sensational form has placed them in the driving seat with Lennon’s team disappearing even further back into the rear-view mirror. An unbeaten Rangers would need their belief and play to erode heavily, and it is just so difficult to see that happening.

Celtic head for Dubai in what will be one of the most sombre flights there they’ve experienced. The Middle East hotspot is a regular haunt for the Parkhead side and has been cited as a key part to their success in recent seasons.

However, there are some things a bit of sunshine cannot fix, with much of the damage to this season’s title defence already inflicted on a group who appeared to have turned a corner coming into this one.

For much of this contest they were the better team, buoyed by belief from a string of recent results. But they must now dig deep – and quickly – to collect themselves for a testing second half to the campaign.

Rangers are back in action first, with a visit to Aberdeen next Sunday (15:00 GMT). Celtic host Hibernian two days later (19:45) after asking for the fixture to be delayed so they could travel to Dubai for a training camp.