It is shaping up to be a thrilling title race and the unpredictability of the Premier League so far is one of the things we can look forward to continuing in the second half of the season.

You could argue a case for four or five teams to win it, and it is wide open – I can’t remember it ever being as compact, with so few points separating the top teams at this stage, as it is this year. 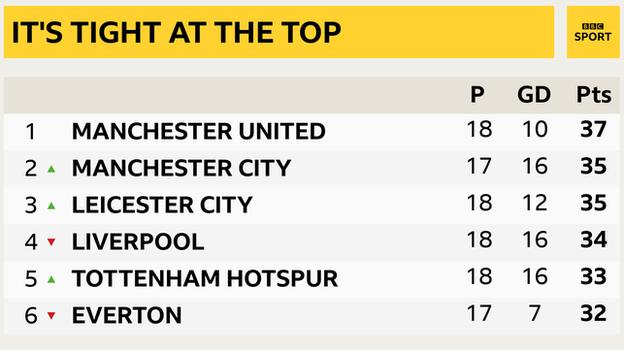 Liverpool have lost their spark in attack

Liverpool were totally dominant last season, but this has been a very different campaign for Jurgen Klopp’s side for a variety of reasons.

As well as their defensive injuries, the defending champions have lost their spark going forward and I thought the first half of Sunday’s draw with Manchester United epitomised their recent issues in front of goal.

They got in some decent positions against United but their final ball or decision making was poor and they failed to capitalise.

Their forward line has been brilliantly effective in the past few years but at Anfield I felt they looked a bit flat. We are used to seeing them tear into teams, but they are a little bit slower in the final third than usual, and it means they look far less dangerous.

Liverpool still kept a clean sheet against United and continued their impressive home unbeaten run in the league, but that was largely down to Alisson, who made two very good saves from Bruno Fernandes and Paul Pogba in the second half.

There must be some concern for Klopp about his side’s form and how they can rediscover their trademark bite in attack, but on the plus side they are only three points off the top.

Man Utd can be delighted with their progress

Liverpool have now gone four league games without a win – which might have been enough to end their title hopes in previous years, but not this time, because every other team has gone through that sort of run too.

Look at Manchester United, for example. When they lost at home to Arsenal on 1 November, they were 15th with seven points from six games.

Two months on, they are two points clear at the top of the table and their manager Ole Gunnar Solskjaer is talking about a draw at Anfield as being an opportunity missed.

It shows how far they have come that they can say they are disappointed with that result, but if you look at the bigger picture then they can be extremely happy with their progress.

Fernandes has played a big part in their recent resurgence but make no mistake, United are a very good team from front to back.

They showed their organisation and togetherness again with the way they dug in and were willing to work hard at Anfield, and their individual quality almost won them the game.

It was their defensive play that impressed me the most, though. Their entire back line was excellent but I thought Luke Shaw was outstanding at left-back, and probably the pick of a very good bunch. He never gave Mohamed Salah a kick.

We saw more of United going forward after the break and they were the better team in the second half. I’m sure they would have taken a point before the game but they should have won it with the chances they had.

Flying Foxes and Tottenham back to winning ways

United are on top at the moment but there are a number of teams within touching distance, including Leicester who are are also right up there after a very good run.

Brendan Rodgers’ side fell away at the end of last season and finished outside the top four but they have got reasons to believe they can maintain their form this time.

James Maddison and Harvey Barnes are playing well, and we know exactly how much of a threat Jamie Vardy carries in their attack, but it is their strength in depth that could make the biggest difference.

The Foxes were badly hit by injuries before Christmas but coped with them very well, and their squad has already shown it is well equipped for the final few months of the season.

Tottenham have got a lot of quality too, as we saw in their win over Sheffield United on Sunday.

Harry Kane and Son Heung-min have been outstanding for Jose Mourinho’s side all season but Tanguy Ndombele showed Spurs are not just about those two with his man-of-the-match display against the Blades.

Spurs have had their issues too, mostly with dropping points from winning positions in recent weeks. At 2-0 up, they had a sloppy 10 or 15 minutes after half-time at Bramall Lane where they conceded and let Sheffield United back into the game, but Ndombele’s brilliant goal was the perfect response and made the points safe.

The next target for Spurs is to string some results together, something they have managed already this season when they went 12 league games unbeaten before Christmas.

Momentum counts for a lot when you are in a title race and it is Manchester City who have the most of that at the moment, with five league wins in a row, and eight in all competitions.

They were the last of the top five to play this weekend, but it was worth the wait because they put in another excellent performance to brush Crystal Palace aside.

Pep Guardiola’s side have clearly tightened up at the back and have improved defensively – John Stones and Ruben Dias have been superb – but they have begun to click again in front of goal too.

City are playing some very good football and at the moment they look hard to stop, but they are not the only team who will look at the top of the table and fancy their chances. I am looking forward to seeing how it all pans out.