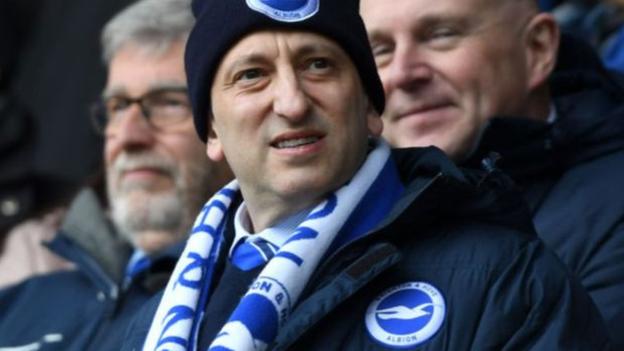 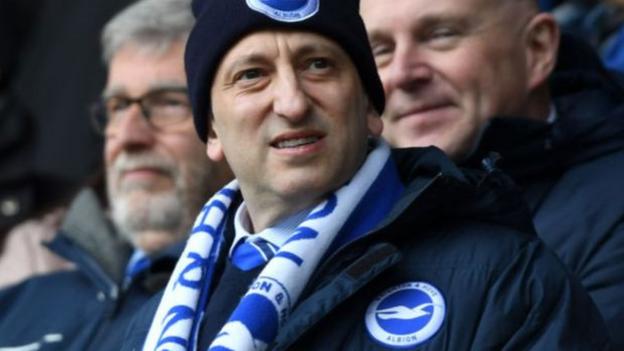 Brighton owner Tony Bloom says he cannot see how clubs can be relegated from the Premier League if the season is not completed.

Friday’s meeting of the 20 top-flight clubs went through several scenarios to finish the campaign.

However, uncertainty still hangs over a season that has nine rounds to go.

“It would be very difficult to relegate somebody, particularly from the Premier League, if the season hasn’t played out,” said Bloom.

In the ‘scheduling model’ possibilities looked at on Friday, the earliest would start on 8 June.

While it was not discussed as expected at that meeting, there are clubs who think 30 June should be the cut-off date for the season to end for contractual reasons.

It is now almost certain it will not be completed at that point and Bloom, whose side are 15th, two points above the drop zone, feels it would be wrong for clubs to lose their status without playing all 38 games.

European football’s governing body Uefa is expected to confirm leagues will be allowed to end seasons prematurely when it meets on Thursday, although similar decisions have already been taken in some quarters.

Non-league football from tier three and below has been voided and in Scotland promotion and relegation has been decided on current places in leagues below the Premiership.

However, another way of deciding who finishes where would be on points-per-game average, although, in England, that would not change the bottom three and would lead to Bournemouth getting relegated on the slimmest of goal differences.

“It’s unfathomable that a team may lose out on 0.2 of a point based on points per game. Also, it does not take into account the strength of the teams you have played.”

Some sides, including Brighton, have five home games left while others have four.

Any decision would require 14 of the 20 clubs to vote in favour and Bloom does not see that happening.

“I really cannot see the percent that would be needed voting for it,” he said.

Even when the game restarts, major issues will be hanging over it.

One leading Premier League executive has privately ridiculed stories that have suggested transfers in excess of £100m may take place during what will be a transfer window, potentially of as little as three weeks, feeling it shows an ignorance of the financial issues being wrestled with.

Bloom rubber-stamped a club record £20m deal to buy defender Adam Webster from Bristol City last summer and kept hold of skipper Lewis Dunk, who was linked with a £45m move to Leicester.

In the current climate, he does not see such deals happening this year.

“I don’t think the market will be nearly as active as in previous seasons,” he said. “And the total transfers will be a very small percentage of what it has been in previous summers.

“The actual value of players has gone right down in all squads. There’s no doubt if you were going to sell a player in the transfer window coming up and you were expecting to be getting £15m, you’re going to get less than that.”