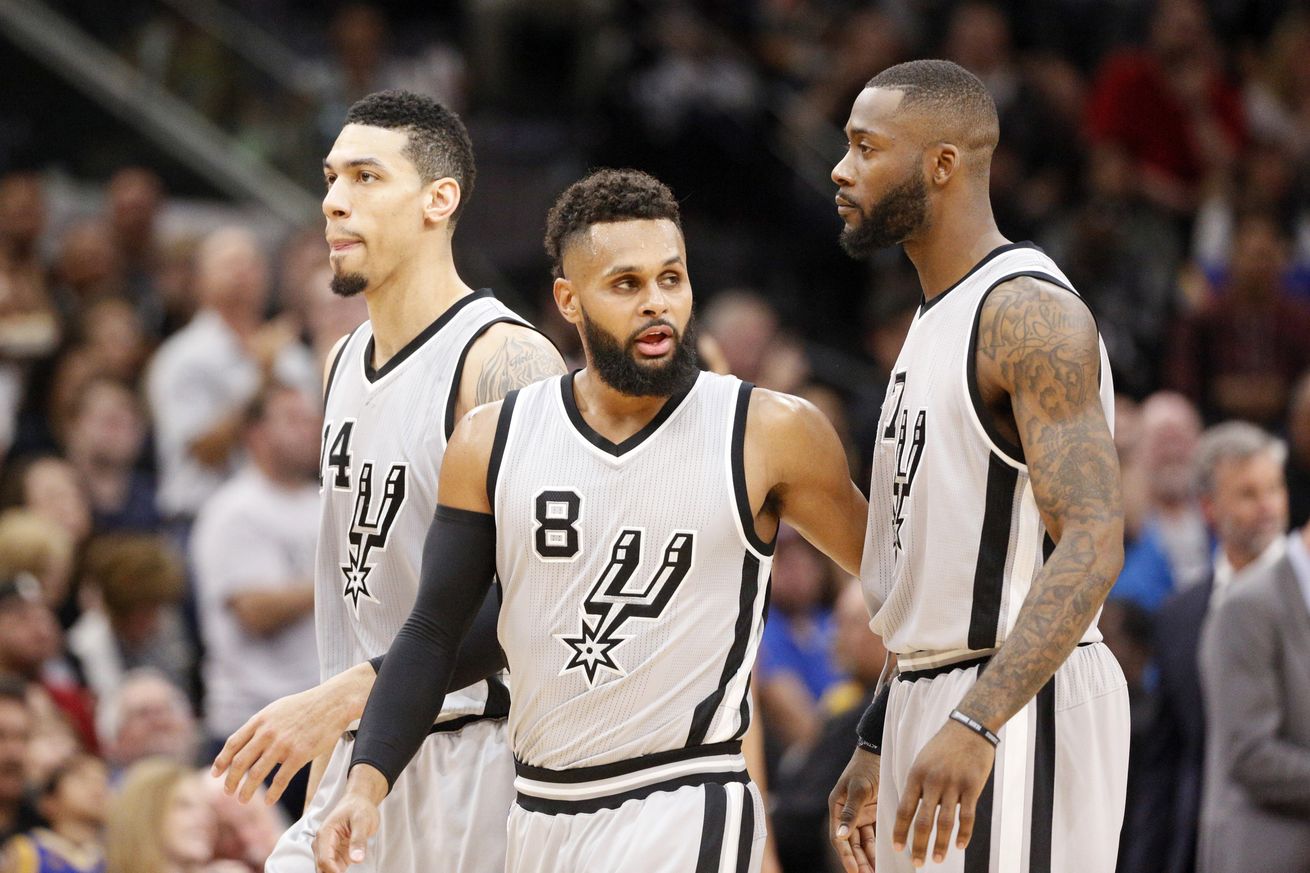 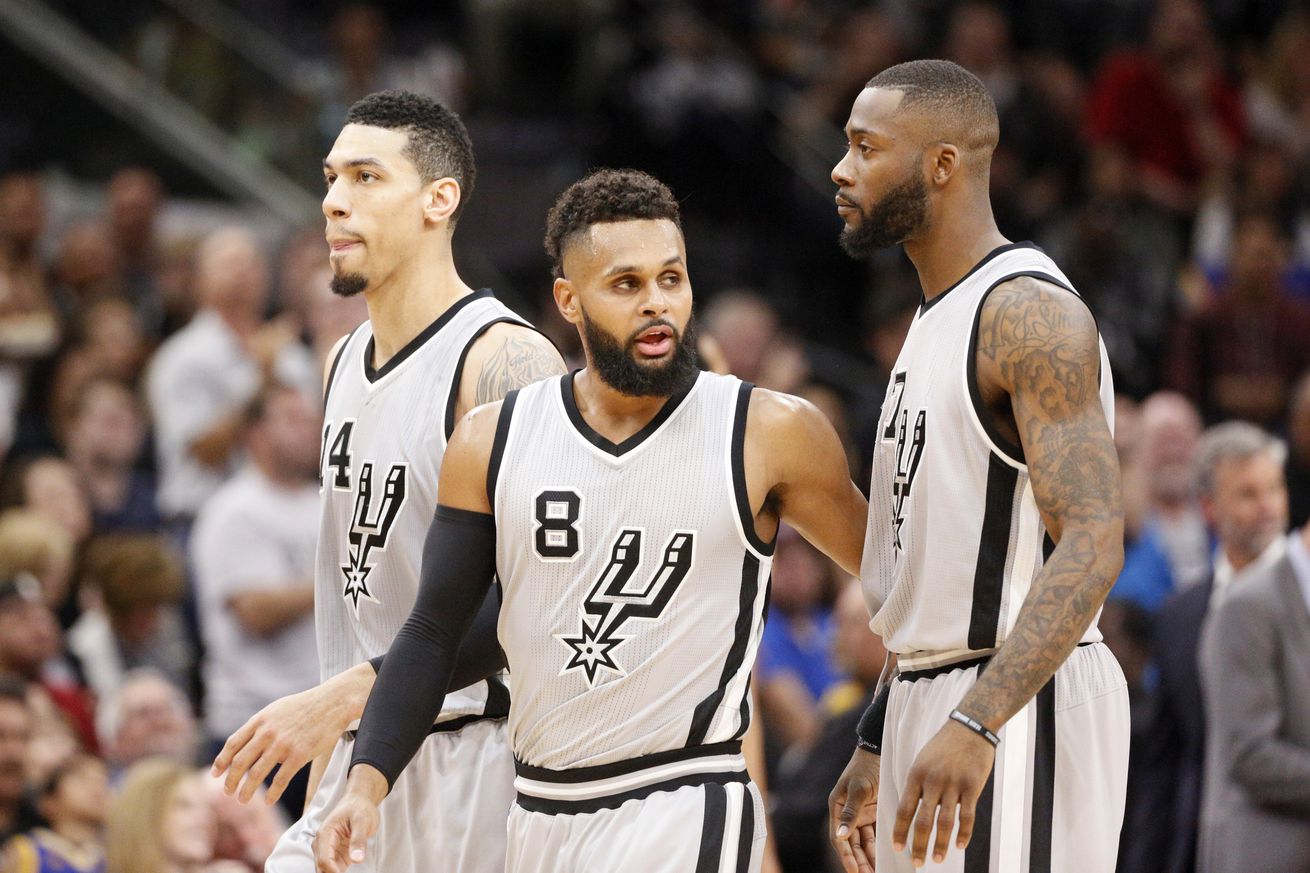 Some new health concerns arose last week, but the Spurs still showed what they’re made of.

Well, anyone who says the Spurs are boring now are stuck in the last decade. It was a wild week for the good guys. There was a dramatic victory over the Rockets, 28 point rally against the Kings for the largest come-back in the Gregg Popovich era, a tough loss to the always-frustrating Thunder )complete with an inadvertent elbow to the noggin of Kawhi Leonard), and finally the anti-thesis to what we had all been waiting for: a completely star-less drubbing of the Warriors that nonetheless tied them up in the loss column and gave the Spurs the tie-breaker in the race for the number 1 seed.

And that was just on court. Off the court, the Spurs are having to deal some injuries to Leonard (concussion – could return tonight), Tony Parker (back), and Dejounte Murray (groin), while also learning that they may be without LaMarcus Aldridge, who has an extended history of heart problems since birth, for a while after he experienced some minor heart arrhythmia. The Spurs should know more about his condition and timetable soon, but in the meantime they will continue to push forward and pound that rock as they take on the Hawks, Trail Blazers, Grizzlies and Kings this week.

(Also a new Power Rankings tradition has been created at the bottom, so be sure to read it all the way through and elaborate in the comments!)

The Spurs quickly went from one concerning situation (Kawhi Leonard’s concussion) to an even more concerning situation (LaMarcus Aldridge’s heart issue). They should get a clearer timetable on Aldridge this week, with another home game against the Warriors, whom they’re now tied with in the loss column, coming on March 29. The Spurs do have terrific depth – they have the league’s best bench NetRtg by a wide margin and for the second straight season – and it will be interesting to see them revert to more pre-Aldridge offense (more pick-and-rolls) for the time being. Their assist rate has been highest when he’s been off the floor.

They insist they don’t care if they have homecourt in the Western Conference finals against, say, the Warriors. I don’t know how that could be true, especially this year.

Did you see how the Spurs clinched their 18th 50-win season in a row to extend a streak that began when Kawhi Leonard was just 7 years old? Without the just-resting Leonard and LaMarcus Aldridge, San Antonio rallied from 28 points down to beat Sacramento and clinch its biggest comeback (regular season or postseason) in nearly 1,900 games under Gregg Popovich, whose run of consecutive 50-win campaigns is now five longer than Pat Riley’s 13 in a row and 10 longer than Phil Jackson’s or Red Auerbach’s best runs (eight in a row). Leonard (concussion) and Aldridge (heart arrhythmia) have since left the lineup in worrying fashion, but it’s not really shaky health prompting ESPN’s Basketball Power Index to give the Spurs just a 32 percent chance of overtaking Golden State for the West’s No. 1 seed. It’s the schedule. Although San Antonio can seize the top spot in the conference as early as Monday night with a home win over Atlanta, Golden State has the more favorable ride for the rest of the regular season, with 11 of its 16 remaining games at home and just seven of those against .500-or-better teams. The Spurs play 10 of their remaining 17 games against .500-or-better teams. Of course, according to the trusty BPI, Golden State had 98 percent odds to finish with the No. 1 seed coming out of the All-Star break and has seen those odds reduced to 68 percent by the stubborn Spurs in less than a month.

The good news: The Spurs are just a half-game behind the Warriors for first place in the West and own the season series thanks to Saturday night’s win, which could potentially be the difference between facing the No. 7 seed in the first round (most likely Oklahoma City or Memphis) or the No. 8 seed (most likely a sub-.500 team like Denver, Portland, Dallas or Minnesota).

The bad news: MVP candidate Kawhi Leonard is in the league’s concussion protocol until further notice after getting hit in the head during Thursday night’s loss to the Thunder, while star forward LaMarcus Aldridge is out indefinitely with minor heart arrhythmia.

This new spot at the bottom of the list will be reserved for the most illogical, boneheaded ranking and/or explanation for said-ranking of the week. This week’s Cellar Dweller is:

I was almost going to write about the Spurs last week, when they peaked in the top spot. A whole lot has changed since then, with LaMarcus Aldridge now out indefinitely due to an irregular heartbeat, Kawhi Leonard concussed and Tony Parker also nursing some knocks. San Antonio is just a game behind KD-less Golden State for the best record in the league and was playing some of its best basketball before the injury bug struck last week. Leonard—no longer a sneaky MVP candidate—shouldn’t be out long, but it’s the health of Aldridge that changes the scenario here.

Aldridge is set for more heart tests Monday. The good news is, the team announced his arrhythmia is “minor.” But it’s not a thing you mess around with, no matter who you are, and it’s worth remembering Aldridge was diagnosed with Wolff-Parkinson-White Syndrome as a rookie in 2007, another condition that impacts heartbeat and which sidelined him for the last nine games of that season. As the Spurs’ second-leading scorer and a player who’s adjusted to become a massive part of the offense, any time without Aldridge (which means more Pau Gasol, David Lee and Dewayne Dedmon) is a massive loss.

The Spurs may not give that much ground in the standings in the meantime, but the potential gravity of the situation needs little explanation. It’s pointless and unfair to Aldridge to speculate further. But this is a situation that could alter his career and the arc of San Antonio’s season. Without him, they’re outside the top tier of teams.

Not only do I disagree with being so quick to drop the Spurs to fourth primarily because of Aldridge’s health concerns (which let it be known are far more important than anything basketball-related), but also for listing the team as “reeling” while justifying ranking the Cavaliers (who are “reeling” themselves after having gone 1-3 last week and lost five of their last seven) second. First of all, the Spurs are not currently reeling. They’ve won 10 of their last 11 games, including avoiding the trap game against a resting Warriors club while being distracted by the news of LA.

Also, don’t get me wrong on Aldridge: if he is out long-term it’s a big problem for the team come playoff time, but at least let his test results come out and his time line to return get determined before overreacting. Leonard could be back as soon as today, and no team is built to deal with the loss of a big man, even one as valuable as Aldridge, like the Spurs are. (Heck, the Cavs are so desperate for a big body that they’re reportedly signing Larry Sanders: a guy with a checkered past who hasn’t played in two years.) If nothing else, let the Spurs earn the drop to 4th before jumping to such a brash conclusion.