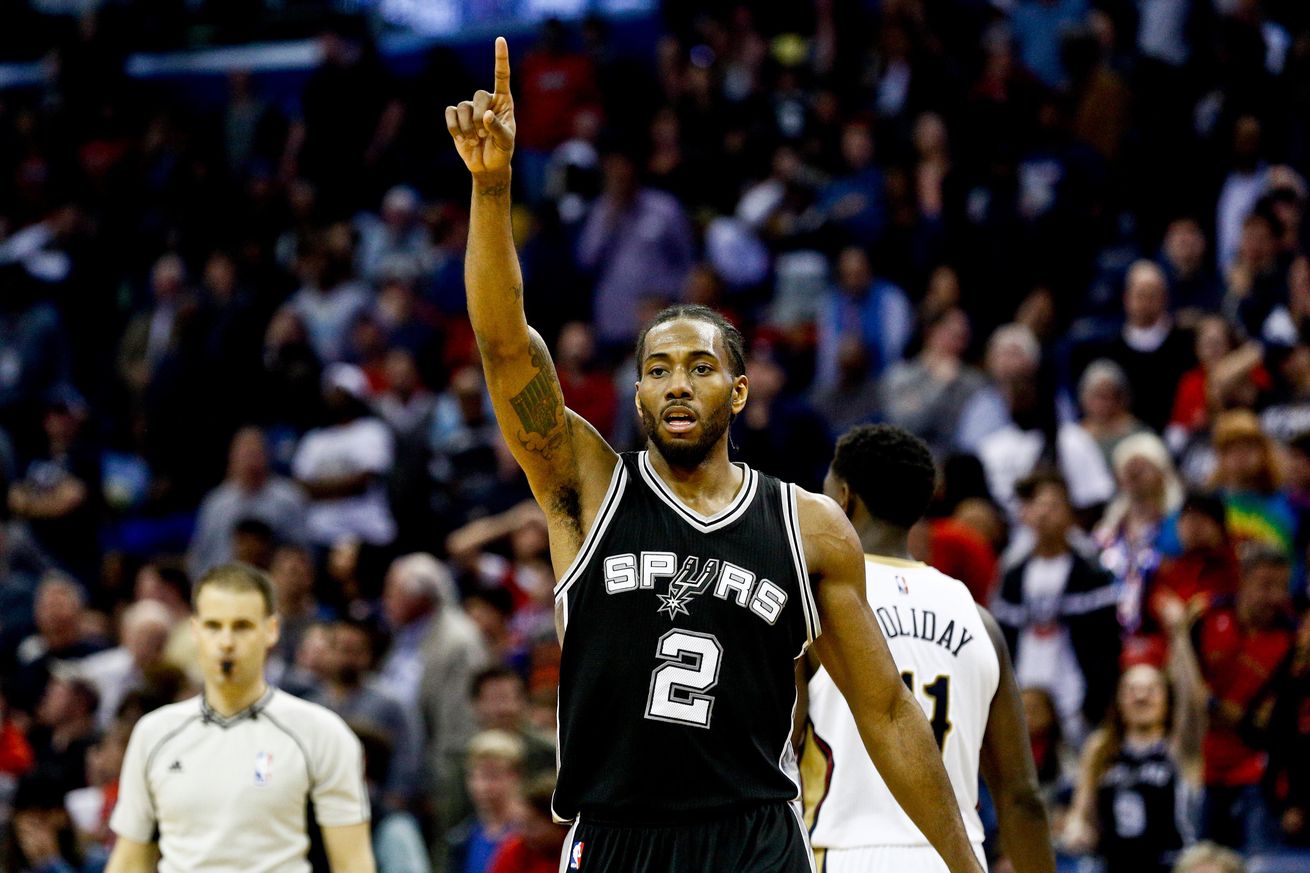 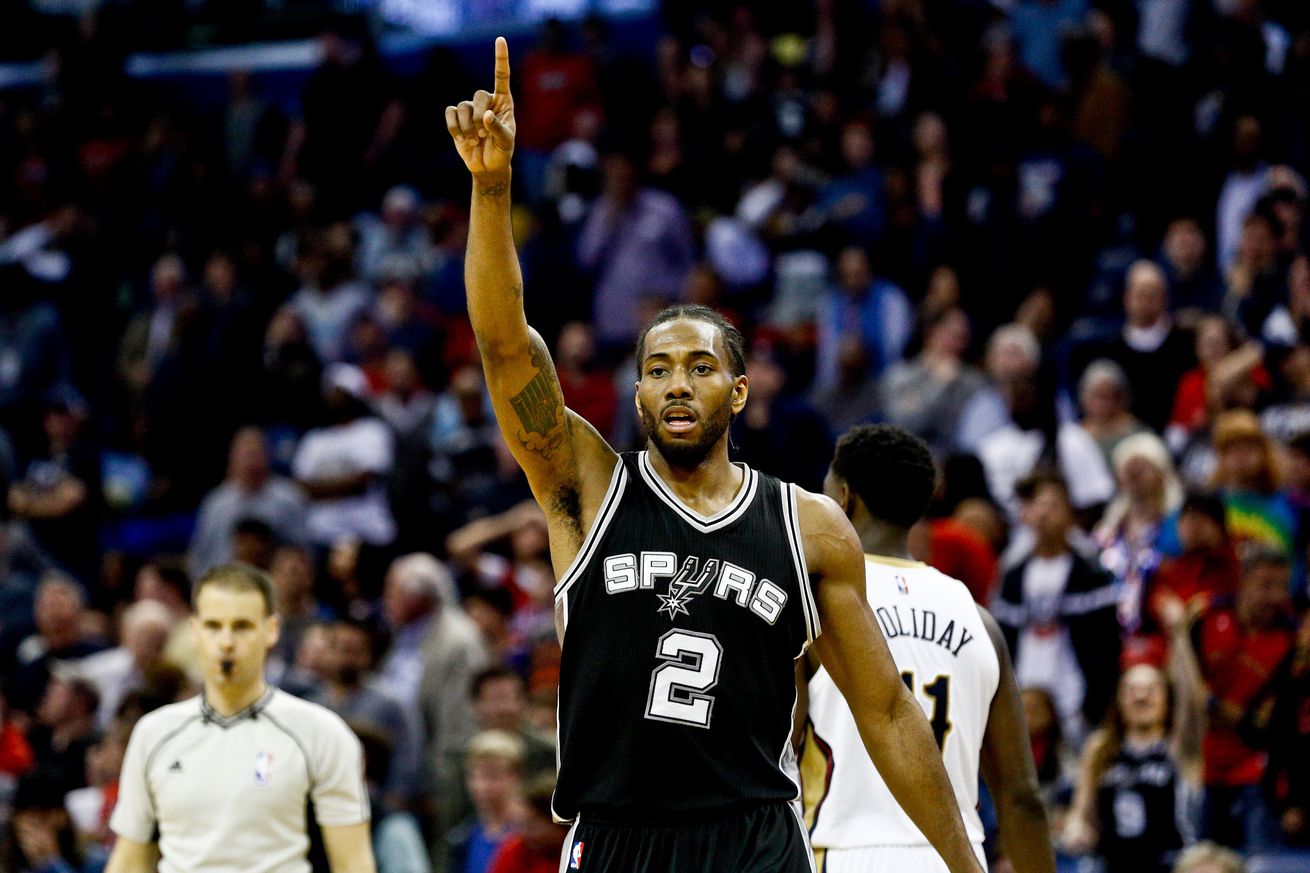 Games against Houston, OKC and Golden State give the Spurs an opportunity to show their mettle.

Last week I wrote that the home stretch of this season was unique in the sense that the Spurs are pretty much locked in position as the second seed in the West and are mainly seeking health and continuity heading towards the playoffs. Well, that changed as Kevin Durant was diagnosed with a grade two MLC sparin, will be out for at least four weeks, and will need time after that to get back in shape.

Not only did that bit of news, unfortunate as it is, offer the Spurs what was probably the only possible path towards stealing the top seed from Golden State, but the Warriors ceded two losses since then to make the race even more competitive. It put them within two games of the Spurs with two meetings in San Antonio coming up, the first being this Sunday.

However, that doesn’t mean the Spurs don’t have to take care of their own business first. For starters, they have to really want that top seed if they are going to peruse it. While rest is still a top priority, Coach Pop showed he might be interested in it by playing his two best players over 40 minutes in back-to-back OT games vs. the Pelicans and Timberwolves, while only resting Manu Ginobili and sticking to smaller, playoff-like rotations.

Speaking of rotations, Pop appears to have settled on Dewayne Dedmon as the starting center, and not only has Pau Gasol professionally accepted that decision, but he has thrived as a scoring threat off the bench thanks to the second unit’s more team-oriented brand of basketball. Thanks to him, some MVP-caliber play from Kawhi Leonard, and LaMarcus Aldridge looking angry and hungry for success again, the Spurs survived three straight nail-biters against young, hungry teams vying for playoff spots.

A lot still has to go right for the Spurs to steal the first seed, but the pieces have fallen into place if they really want it.

In the league’s highest scoring season of the last 26 years, you don’t see many overtime games where the winning team scores 101 points or less. But the Spurs had two in back-to-back nights, holding both the Pelicans and Timberwolves under 90 points per 100 possessions. Kawhi Leonard has scored 30-plus in three straight games and they’re getting more offense from Pau Gasol, who has looked comfortable coming off the bench, averaging 16.0 points on 57 percent shooting in his five games back. The Spurs have won seven straight games, are just two in the loss column behind the Warriors, and will have a rest advantage when they host Golden State on Saturday.

Team to watch this week: San Antonio — The league’s No. 1 defense will play host to the league’s top two offenses, facing the Rockets on Monday and the Warriors on Sunday, with a visit to Oklahoma City in between.

The Spurs have won seven straight and 12 of 14, so they boost up into the top spot this week. Before the season is over, spend one Spurs game just focused on Kawhi Leonard playing defense.

Then imagine dribbling a basketball within six feet of him. Then try to sleep that night.

The Spurs have an opening to steal the 1-seed with Durant’s injury, and they’re playing the best ball of their season. You can come up with plenty of reasons why Russ Westbrook or James Harden should be MVP, but you can’t come up with any real reasons why Kawhi Leonard shouldn’t be in the discussion.

Riding an NBA-best seven-game winning streak, San Antonio’s last three wins came by the skin of their teeth. But they were wins all the same. On Wednesday, Kawhi Leonard hit a game-winning jumper in the final seconds to give the Spurs a one-point win over the Pacers. On Friday, the Spurs held on to beat New Orleans in overtime when a potential game-tying three-pointer from DeMarcus Cousins missed wide left. On Saturday, the Spurs fought back after a slow start to beat the Timberwolves by seven in overtime.

CLUTCH KAWHI!@spurs escape past @pacers behind 31/10 from Leonard and the game winner! pic.twitter.com/9X6Xos0VCv