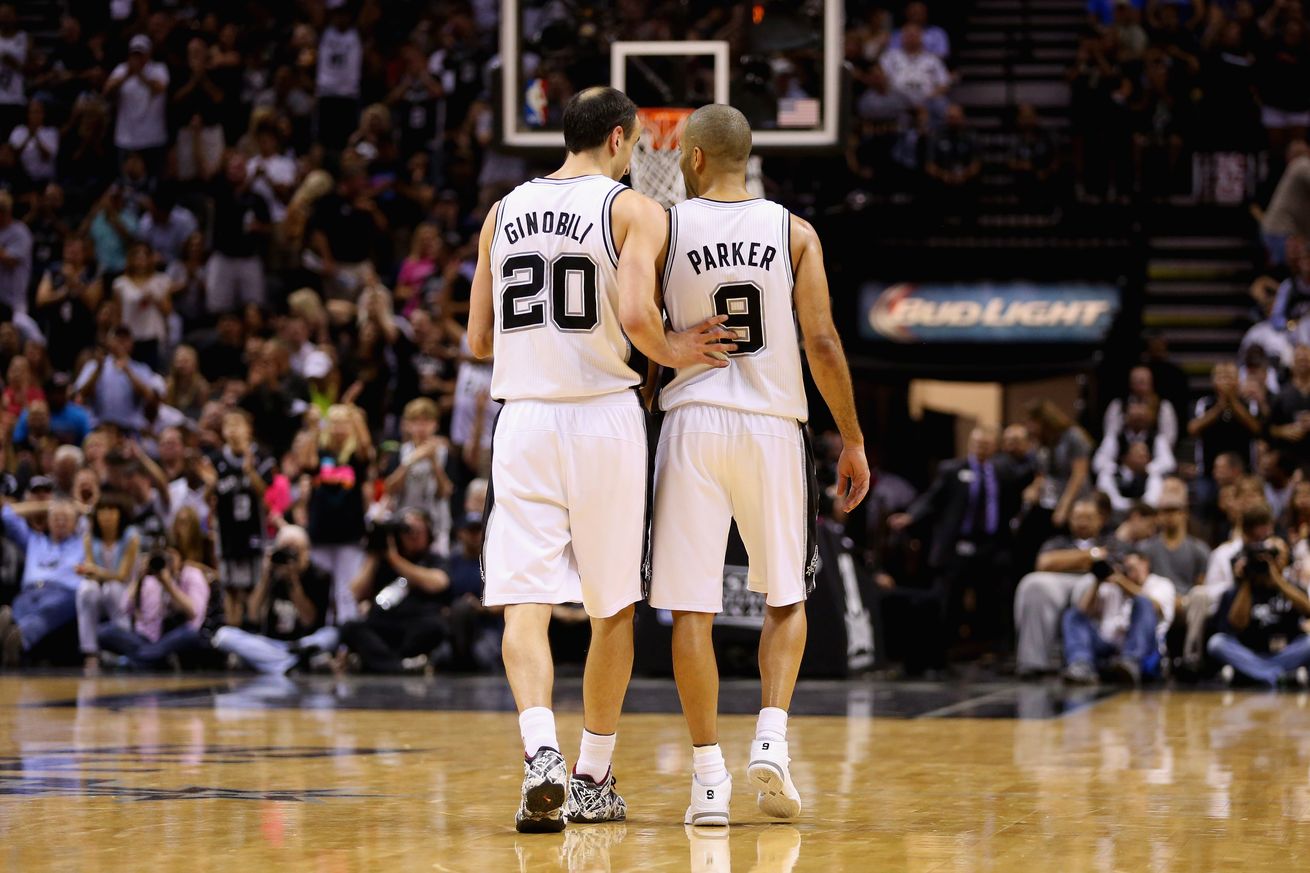 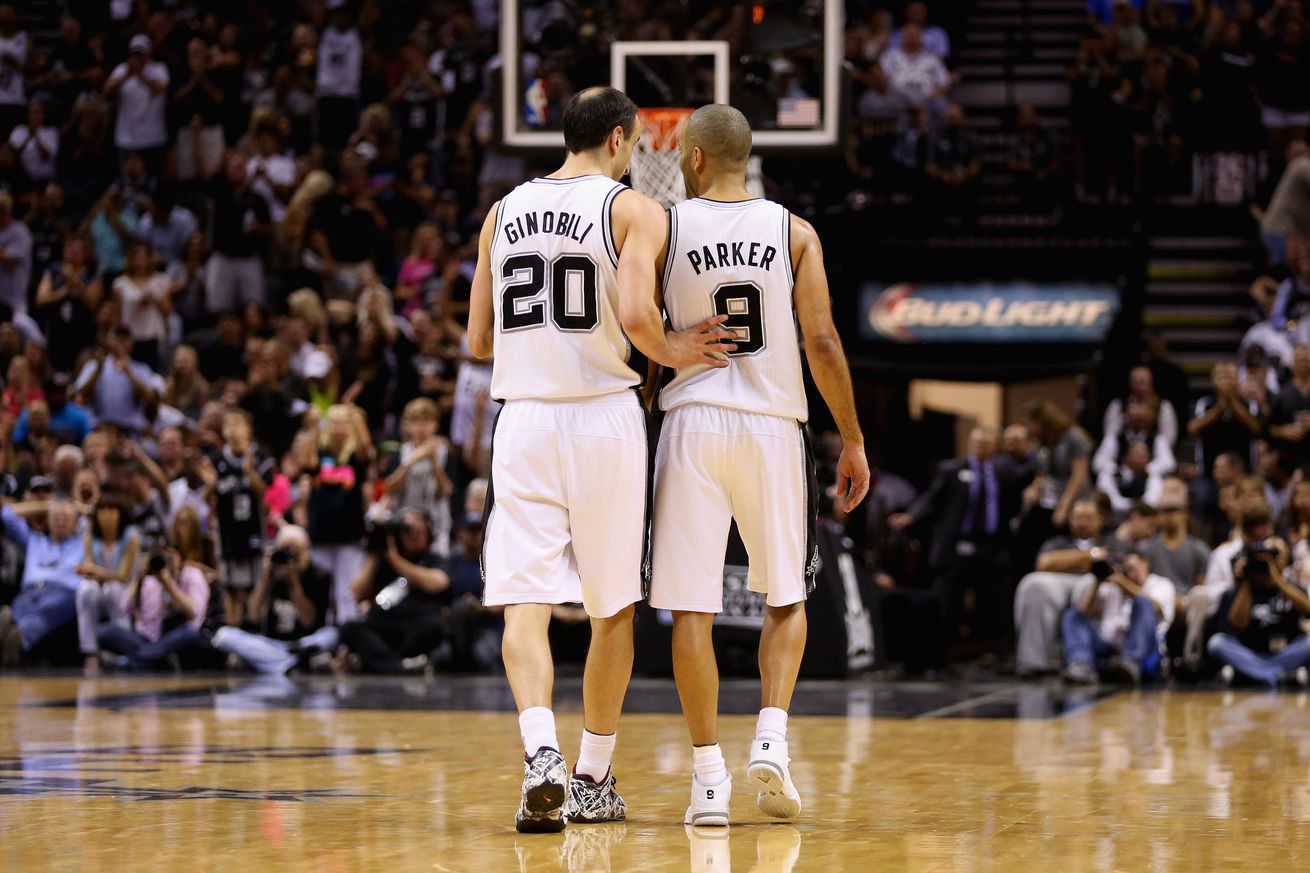 Pop managed the end of the greatest Spur ever, but he’s not done ushering the Big 3 into their twilight years.

One advantage college coaches have over NBA coaches is that we never have to see our players get old and lose their games. College “veterans” are junior and seniors, normally not older than 22 years old, and years away from any decline. Indeed, if we are doing our jobs right as coaches, our players continue to improve each year, and hit their peaks — athletically and in game-knowledge — as seniors.

Gregg Popovich must miss that part of the college game, especially now. Unlike college players, NBA players all decline. Over the past few years, Pop has witnessed the decline and retirement of The Great Duncan, and now is dealing with the decline of My Man Manu and the Oui Frenchman.

With Manu Ginobili, who has almost always come off the bench, it is somehow easier to deal with. Even at his peak, Manu was a sixth man, and he doesn’t start now. Squeezing his minutes down can be done gradually, and Pop has done exactly that. Of course, Pop did that brilliantly against the Nuggets, getting 18 points from Manu in 10 minutes — great coaching, Pop.

It is different with Tony Parker. He has started virtually his entire career. “Benching” him by taking him out of the starting lineup will be an earth-shaking event — especially since no one can know how he will handle it.

But that day approaches, even if not this season. Indeed, several times in the last few games we have seen hints. I have not seen anyone else comment on it, but the Spurs have recently gone without a point guard on the floor for stretches. Manu has served as de facto point guard (on offense), with Danny Green or Jonathan Simmons as the other guard (and often defending the opposing team’s point guard). Is this a precursor to less time for Parker, especially in the playoffs, or is it just Pop trying out stuff in the dog days of February?

Some have suggested that the change with Parker may come during this year’s playoffs. Depending on final standings, the Spurs will be facing one or more of Curry, Chris Paul, Mike Conley, James Harden, etc. — all tough match-ups for our Frenchman (even in his prime). Would Pop make such a drastic change, especially since the Spurs are once again on a 60 win pace — with Parker as their starting point guard and playing about 25 minutes a game? He would if the Parker of Philly and OKC games (consecutive 0-fers from the field) is playing.

However, let’s not to caught up in Recency Bias. We must also remember that Parker had a 16 point outing (8 for 12 from the floor) against Dallas. And before his foot injury, he had an 8 game stretch in January which was vintage TP — 14 points per game on 54% shooting. And Saturday night, like his fellow Big Three veteran Manu, TP remembered to make shots, 8 of them on 8 shots. I am not a mathmatician, but I’m pretty sure that is infinitely better than 0-fer.

The two games with no buckets are too small a sample size to decide anything, as was the game against Denver. (Take it from me, since I am one — older players have both flashback and bad back games.) If we look at the entire season, Parker is actually exactly at his career assists per minute — a great way to measure what a point guard actually does. He is the best on the team setting up Aldridge and Pau for pick and pops.

For these reasons, I don’t believe Pop will go away from the security blanket the Oui Frenchman provides. Just like with college coaches, NBA coaches like having the senior point guard on the floors. Sometimes it just feels right.