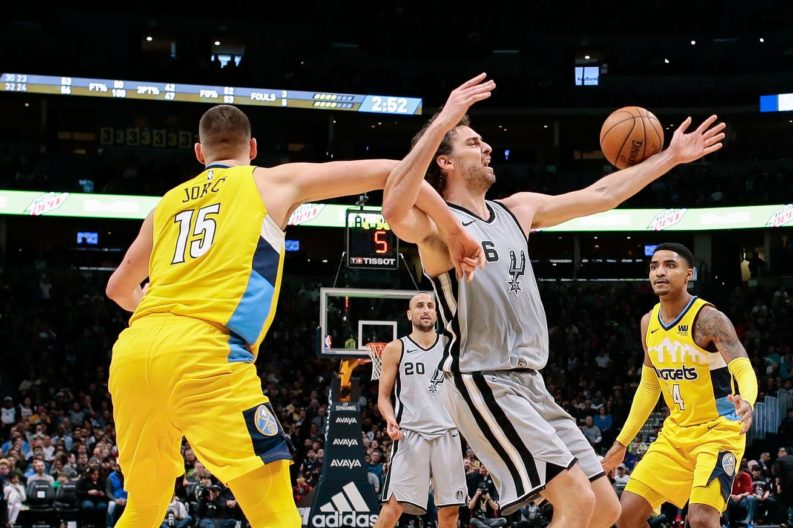 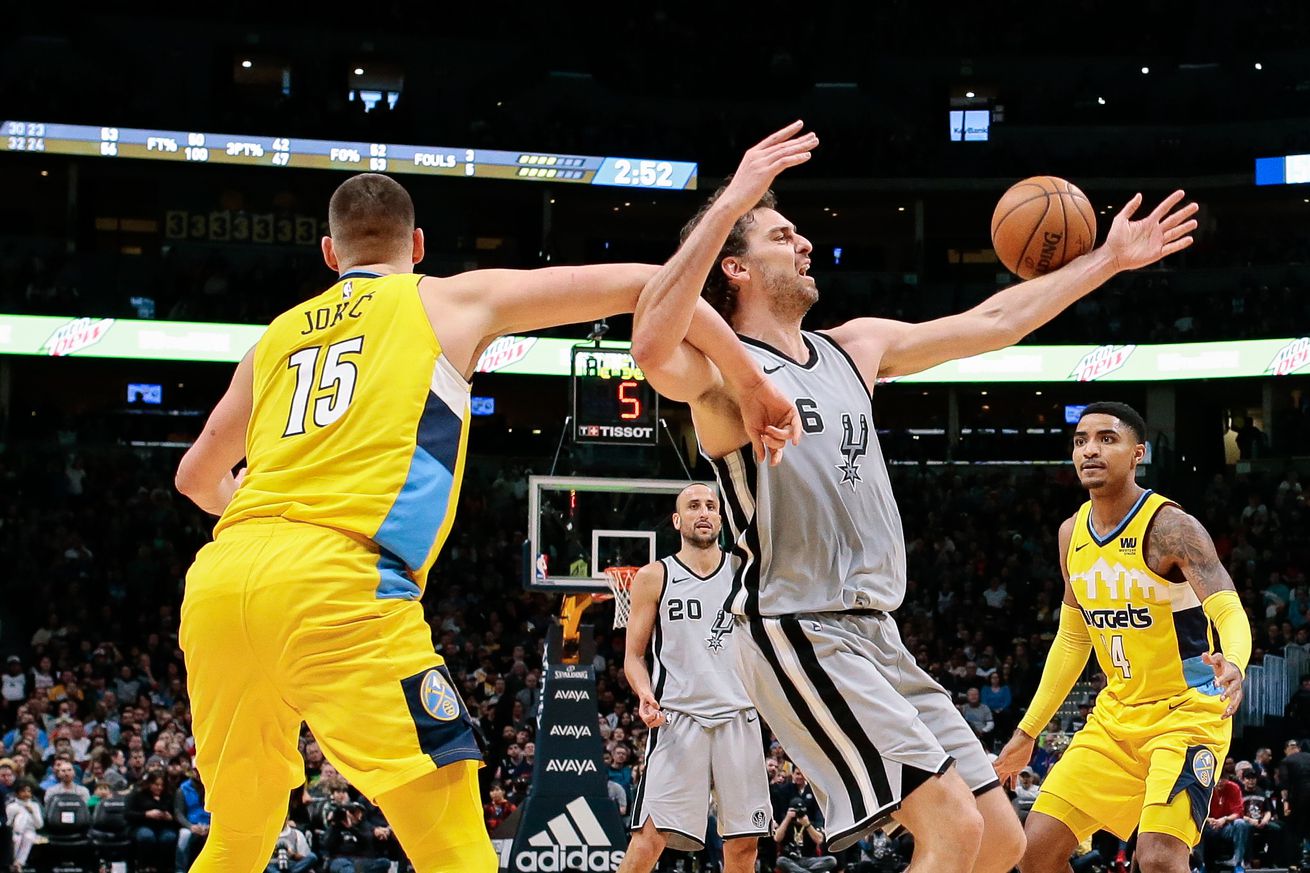 The Spurs did almost everything else right on offense, but too many missed free throws were costly in another close loss.

Second verse, same as the first. Back in Denver where they left off before the All-Star break, the Spurs came up against a streaking Nuggets team that is one of about seven nipping at the heels of a struggling squad that can’t seem to get everyone healthy, and that’s excluding Kawhi Leonard.

While not nearly as depleted as they were in their last matchup — Rudy Gay and LaMarcus Aldridge were back — it was Danny Green who was out this time after being served a bad plate of spaghetti. Even though the Spurs can’t be called “exhausted” after ten days off, this game was practically a mirror image in how their last match-up went, which the Spurs hanging tough and even leading during a back-and-fourth affair, but a couple of bad stretches in fourth quarter doomed them again.

Patty Mills got the start in place of Green and provided some instant offense, hitting back-to-back threes sandwiched around a diving steal. Unfortunately, Wilson Chandler was also red-hot early for the Nuggets, hitting 4-4 threes for 14 points in the first quarter while spotting the Nuggets a 32-30 lead.

With Matt Bonner in the building as the Spurs’ color analyst in place of a vacationing Sean Elliott, Mills entered the night needing only five threes to tie the Red Rocket for fourth all-time in franchise history. He looked like he just might accomplish that feat in front of his former teammate after hitting two more threes to start second quarter, but that would be the final ones he made in an otherwise strong 21-point, 4-assist showing from the Aussie.

After the Spurs briefly took the lead, Gregg Popovich ended up calling back-to-back timeouts after a Nuggets 10-1 run that consisted of two wide open threes and two fast break dunks to regain the lead at 38-34. Dejounte Murray, who otherwise had a quiet night, responded with 10-straight points of his own, but the Nuggets still ended the half up 63-61 largely thanks to hitting ten threes.

After quietly leading the Spurs with 14 points in the first half, the Spurs started pounding the ball inside to Aldridge to start the second half and quickly regained the lead at 69-65. The Spurs maintained the lead for much of the quarter before a hard collision on a rebound between Mills and Tony Parker briefly forced a timeout. Fortunately everyone was okay, but it halted the Spurs momentum, and the Nuggets came storming back with a 10-0 run with 1:45 left, and they would lead 96-89 heading into what would be a crazy fourth quarter.

The officials suddenly got extremely whistle-happy, and as a result Denver were in the bonus less than four minutes into the quarter, and the Spurs would soon follow. A game that was already a shootout became a free throw slugfest with the Spurs hitting 10-15 in the quarter, and the Nuggets hitting 7-10. Unfortunately, that anonymous stat pretty much summed up the Spurs night.

Normally if one was told the Spurs would have a 39-19 advantage on free throw attempts, 28 assists to just 7 turnovers, and shot over 50% with 38 points from Aldridge and 21 from Mills, you’d think “Spurs win” every time. Not this time, and a big reason for that was free throw percentage. The Spurs only hit 28 of their free throws, and while that isn’t horrible, it’s still well below their season average of 77.5% and was the biggest deciding factor in their loss.

There were other issues, of course. While the Nuggets only hit two threes in the second half, some botched defensive rotations in the first is what gave them the advantage in the first place. Denver was also able to capitalize on 18 offensive rebounds and a 52-38 advantage on the boards overall.

After getting the lead back at 114-112 with 4:27 left, the Spurs once again couldn’t get it done down the stretch — a theme in this losing streak — with the Nuggets beating them up the floor time-and-again while the Spurs ran out of gas for another heart-breaking 119-122 loss. Nikola Jokic lead the Nuggets with a 28-11-11 triple-double despite fouling out late (another thing they failed to take advantage of).

It was the Spurs fourth loss in a row and guarantees only the second Rodeo Road Trip with a losing record in their 16-and-counting tries. The Spurs will look to finish on a high note against LeBron’s new Cavs on Sunday before heading back home.

The Spurs fall to 35-25 but remain in third place out West thanks to a Timberwolves loss to the Rockets tonight. Behind them, seeds 4-8 all have 26 losses, followed closely by the Clippers at 27. The 10th-seeded Jazz did finally have their 11-game losing streak snapped by the Trail Blazers tonight, giving them their 30th loss and providing a tiny bit more breathing room in the back.