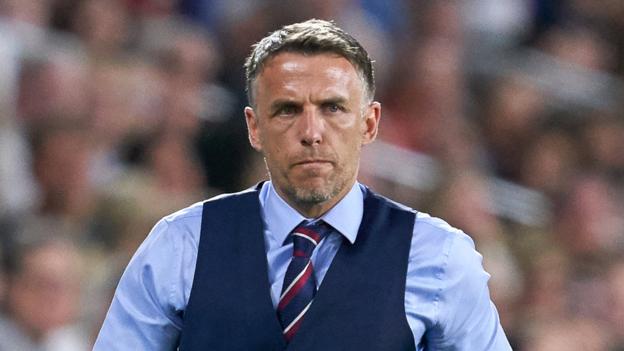 Phil Neville says there is “plenty to work on” as it was confirmed he will leave his role as England women’s manager in July 2021.

Neville was set to lead Team GB into this summer’s Olympic Games, before taking control of the Lionesses at the Women’s Euros on home soil in 2021.

But both events have been delayed by a year because of the coronavirus crisis.

The Football Association said it wanted the same coach to lead the Lionesses at the Euros and the 2023 World Cup.

“I am looking forward to getting back to work with the team as soon as possible,” said former England international Neville.

“We have a fantastic squad of players and there is plenty to work on as we look to progress as a team going into 2021.”

The 43-year-old former Manchester United and Everton defender was appointed in January 2018 on a contract until the summer of 2021.

He led the Lionesses to a first SheBelieves Cup success and a fourth-place finish at the World Cup in 2019 but since last year’s quarter-final win over Norway, they have lost seven of 11 games and failed to retain their SheBelieves Cup title in March.

The FA says the decision about his future has come about because of the coronavirus pandemic and its impact on the women’s football calendar.

Its director of women’s football, Sue Campbell, said that “in the best interests” of the team both the FA and Neville agreed the Lionesses needed to have “continuity of coaching” going into the Euros, which will now take place in July 2022, and next World Cup.

“Once football returns after this difficult period, Phil will continue his work with the Lionesses on the further development of his squad,” added Campbell.

“I will support him fully with that important task whilst moving forward with the crucial succession planning process.

“We will now discuss next steps with the British Olympic Association and the home nations with regard to Team GB football and we are not in a position to make any further comment at this time.”

How successful was Neville?

He was largely untested as a manager when he was appointed in 2018, but the FA spoke of how his “winning mentality” would take England to the next level, having reached semi-finals in their past two major tournaments.

Instead, it could be argued England have gone backwards. The SheBelieves Cup win in 2019 was a high point, and the Lionesses came close to making the World Cup final later that summer, but things have unravelled since.

He still had the backing of the FA, but there is a feeling of unfulfilled promise as he leaves – and that will surely hurt a dedicated and meticulous professional who never quite brought the best out of his team.