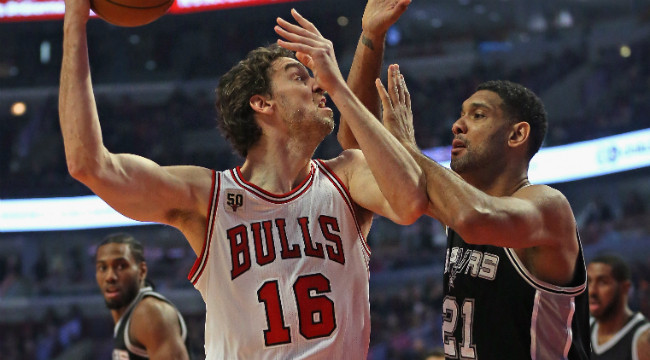 Pau Gasol is officially a Spur, but he could have been one already. What changed?

After Tim Duncan’s retirement, the San Antonio Spurs moved decisively to fill the gap left by one Hall-of-Fame center with another, less legendary Hall of Fame center in Pau Gasol. The 36-year-old big man figures to slot right into the starting lineup and has the intelligence and open personality to seamlessly integrate himself into the Spurs’ community. It’s an unsurprising match, which is why it makes sense that it’s not the first time the Spurs have recruited Pau.

Speaking at a sponsorship event in Spain, Pau elaborated:

“Two years ago I declined the option of going to the Spurs. Now it was the right time to go to San Antonio,” he said: “Popovich has he told me that I will contribute a lot and along with LaMarcus Aldridge, without Tim Duncan any more, I will be one of the leaders of the team in the front line”.

When Gasol left the Lakers for free agency two years ago, he wound up picking the Bulls over the Spurs at the time. Most likely, his reason for choosing Chicago was the promise of starting……Read More

Source: Pau Gasol Says He Turned Down A Spurs Offer Two Years Ago