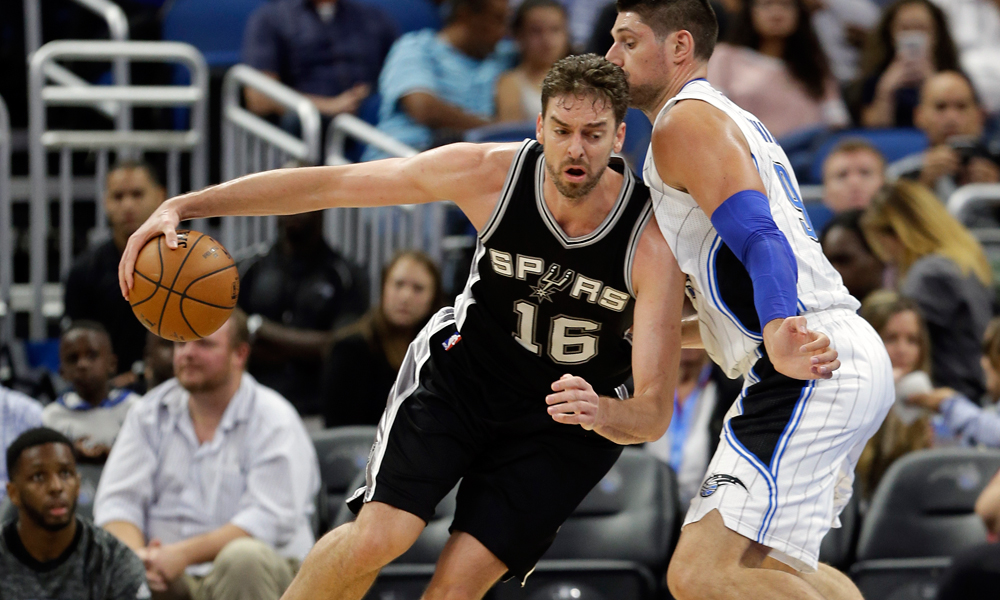 For most teams, there’s a standard expectation when someone like Pau Gasol joins the roster. A respected veteran of his ilk is expected to contribute on the court, of course, but he also typically commands a behind-the-scenes burden that comes with his age and experience. In many cases, he’s viewed as both a leader in the locker room and an outlet for up-and-coming stars to properly channel their experiences.

The San Antonio Spurs are not most teams.

“You don’t need to be too loud in this locker room, because it’s not like a group of young guys that need more leadership or direction,” Gasol said. “There’s not much need for me to be loud and say much.”

Professional sports’ model franchise is a whole different experience for Gasol after a couple years in Chicago where he shouldered more than his share of typical veteran responsibility. A strange mix of personalities and skill sets nearly boiled over during Gasol’s time with the Bulls, culminating in a hugely disappointing 2015-16 season where they missed the playoffs and had players – Gasol included – commenting publicly and privately on issues like a divided locker room and a lack of discipline.

Drama in San Antonio is when Pop can’t decide which wine to pair with dinner. It’s tough for any seven-foot NBA star to be just another guy, but the franchise moving on from Tim freaking Duncan like he was a journeyman who did a few nice things is a pretty good place to try.

“I don’t really have to coach him much,” Gregg Popovich said of Gasol. “He just kind of blends into everybody else. So he’s an easy one. He’s taken his time to defer to the people who were here, and listen to what they all have to say first. He’s a smart guy. But his counsel will be used, for sure.”

In the meantime, Gasol has been able to focus on what’s been a pretty big change of scenery from an on-court standpoint as well. He’s playing eight fewer nightly minutes than any of his 15 NBA seasons before this one, and has been less of a centerpiece than ever before – the 19.6 percent of team possessions he’s used while on the floor would represent the first time in his career he’s ever fallen under the league average of 20 percent.

Gasol is finishing barely half last season’s number of nightly plays in the post, per Synergy Sports – his bread and butter for most of his time in the league. He’s taking a higher percentage of his shots away from the basket than ever before, and drawing assists on over 80 percent of his baskets after hovering near 60 percent for the last decade and a half. This isn’t business as usual for a guy who’s been an offensive centerpiece for virtually his entire basketball life.

As the way he’s used has changed rapidly, though, many elements of his overall efficiency haven’t. His true shooting percentage (which accounts for the value of threes and free throws) sits at the exact same mark as last season, and his turnover rate is actually down. He’s never finished at the rim so efficiently in his career, likely attributable to being a bit more selective.

“I think that’s what makes him a special player, is that he’s able to figure out – both in a game, and within a team – what a team needs,” said Utah Jazz coach Quin Snyder, who became close with Gasol as an assistant coach with the Lakers. “Do we need outside shooting? Do we need the post? Do we need passing? He can do all those things.”

It hasn’t been all smooth sailing. Remodeling such a fine-tuned engine after so many years can take some massaging. Things are still coming together from a team standpoint: The Spurs are struggling more than usual to defend and rebound while Gasol is on the floor, missing that Duncan-like quality that even an international great like Pau won’t ever be able to replace. The fit alongside fellow veteran big man LaMarcus Aldridge has been tough – the pair has been outscored by 25 points in just 113 minutes together on the year, with both in positive figures on their own.

Ask another vet with experience being the new guy in this locker room, though, and he’ll tell you this isn’t much of a surprise.

“There haven’t been any players [who from] the get-go provided what we all expected from them – even LaMarcus [Aldridge], if you look at his stats from his games the first two months last year, it was hard,” Manu Ginobili said. “And then he started to figure it out, and to feel more confident. It happens to everybody. So he will be great.”

That’s the beauty of joining up in San Antonio, where a high-50s win total and a home playoff series or two might actually just be a signing bonus. This is basically still preseason for the Spurs; Pop almost actively invites these little dilemmas to close up holes before it really matters. It’s perfectly reasonable to expect some level of decline from Gasol as he puts 35 years old firmly in his rearview, but the Spurs have 70-plus games to figure out exactly how to use him.

It’s not like he’ll have any extracurricular duties to distract him as he finds his niche, either. There really couldn’t be a softer landing spot for an older player (probably any player, to be fair). That hand-in-glove feeling is mutual, even if the numbers don’t yet bear it out.

“He’s the prototype, almost, of a Spur. Very good player, high basketball IQ, experienced – foreigner,” Ginobili said with a laugh. “He understands the game, so we all knew he was going to give us a lot of things. It’s still very early.”