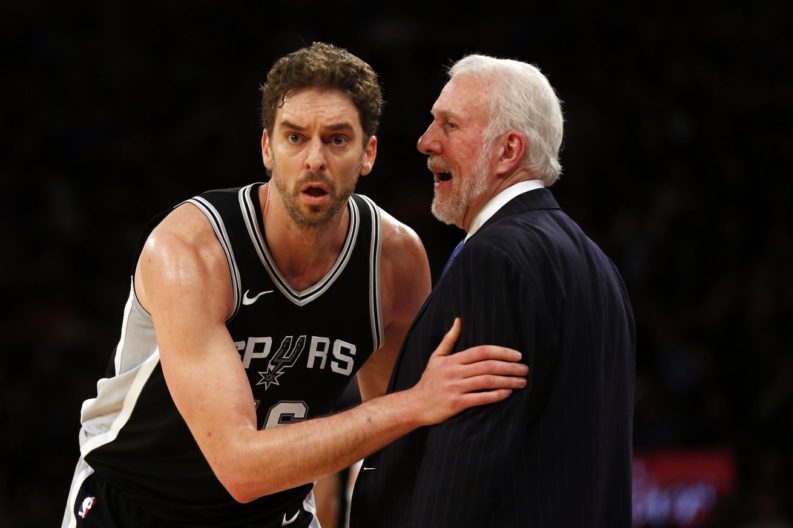 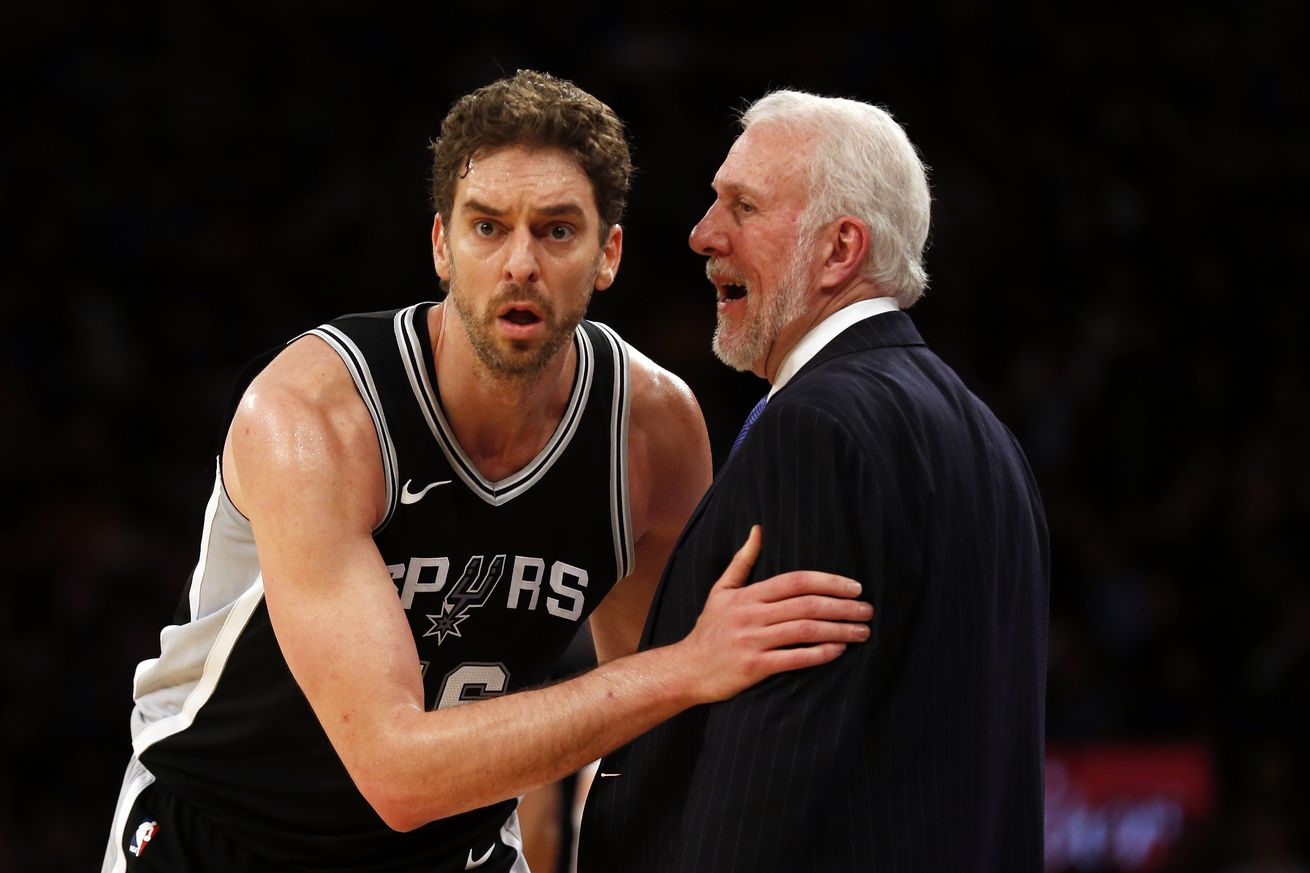 After a full career’s-worth of time spent elsewhere, Gasol is showing he understands what San Antonio is all about.

Pau Gasol didn’t need the Spurs. He had a Hall of Fame-worthy resume before he set foot in the home locker room of the AT&T Center. Money wasn’t really an issue, not after being one of the highest paid players in the league for years. Sure, he was at the tail end of his career, but he was an All-Star two years in a row before arriving in San Antonio.

Pau Gasol didn’t need the Spurs, which was reason enough to be skeptical about how he’d fit with them. As talented as he’s always been, he’s also been perceived as high maintenance. He had a successful but turbulent tenure in Los Angeles and spurned San Antonio for Chicago. Even as his game regressed from its peak, he demanded touches and a starting role. He simply didn’t seem to be “over himself.”

Pau Gasol didn’t need the Spurs, but he signed with them anyway. And two years later, all those concerns about his fit with the team’s culture have disappeared.

Now that he’s been in San Antonio for a while, it’s tempting to consider any past worries to have been overblown and assume Gasol had an undeserved reputation as difficult. Nothing can be further from the truth. In the past Pau openly sulked, multiple times, and voiced his grievances through the media. He complained about wanting a bigger role back in 2010, when the Lakers were contenders. He didn’t want to space the floor for Mike Brown and Andrew Bynum or play the way Mike D’Antoni wanted him to.

To be fair, Pau might have been right on those issues. He was in a dysfunctional situation in Los Angeles at times and still in the back end of the prime of his career. Yet he didn’t exactly become the most low maintenance guy when he arrived in Chicago. Remember, Gasol passed on San Antonio to sign with the Bulls, so it’s easy to assume that he wanted to be there. Yet it was largely speculated that he refused to come off the bench. Even if he didn’t, he certainly didn’t provide veteran leadership to a crumbling locker room.

Now Pau was never a coach killing nightmare or someone who was going to cause trouble with his off-court behavior. But he was a proud guy who was not afraid to rock the boat if he wasn’t happy. Until he joined the Spurs, at least.

Gasol not only lost his starting spot in his first season with the Spurs, but lost it while he was injured. He could have taken offense to that. Typically, a star of his stature would have had his spot on the starting lineup upon returning to the court. He didn’t let that bother him, immediately saying that he was fine with coming off the bench. The same guy that refused to be a sub in the past agreed to take a back seat to an unproven Dewayne Dedmon.

Pau got the starting spot back now, but his game has changed. The year before joining the Spurs, Pau finished plays in the post at a 20.7% frequency, per Synergy Sports. In his first year in San Antonio, that number went down to 19.6%. This season it’s at 17.6%. His three-point attempts per 100 possessions, meanwhile, have gone from 1.5 in Chicago, to 3.3 and now 4.1 in his two years with the Spurs. After calling for more inside touches as recently as late 2015, Pau is happy spacing the floor for LaMarcus Aldridge and Kawhi Leonard.

So what’s changed? The easy answer would be to credit the Spurs’ culture, spearheaded by Gregg Popovich for Pau’s evolution. Pop turned him into the ultimate team player, because that’s what he does. I typically find that to be lazy and reductive, a way to magically explain the complex dynamics that surely go on behind closed doors. Yet even I have to say that this time that explanation seems to have merit.

It’s probably not just that, though. Gasol clearly has matured and realized his limitations on his own. He’s also obviously comfortable in San Antonio’s system and with the team’s unselfish philosophy, which has some similarities with the Spanish national team. Pau deserves credit for evolving, even at the tail end of his career. Lionizing the Spurs’ culture at the expense of giving him his due is not right.

So was Pau finally “over himself,” as Pop would say, when he joined the Spurs or did the Spurs help him get there? We may never know. What we do know for sure is that two years in, he’s been all about sacrifice and hasn’t complained once.

No matter how it happened, Pau has become a Spur through and through.

Less of this, please

The Spurs have been ravaged by injuries, so they’ve been forced to go deeper into their bench and play units they wouldn’t have trotted out otherwise. They are often learning on the fly what works and what doesn’t.

Any unit in which Ginobili plays small forward is going to be at a size disadvantage. In order to conserve his body, Ginobili has lost a lot of weight. He’s still a crafty and frisky defender, but he can’t handle bigger wings on defense. Forbes tries hard but he just doesn’t have the length to guard most shooting guards. Even Mills is a little undersized for the point guard position. Playing the three together is just asking to be bullied.

When all three have been on the court, the Spurs have allowed a whopping 122.9 points per 100 possessions. They bleed points.

It’s not easy to find a way to avoid playing them together. Three rotation wings are out with injury, after all. But there has to be a way to play them together less. Maybe Davis Bertans and Joffrey Lauvergne can play a couple more minutes, so that Kyle Anderson can spend all of his time at small forward. Maybe Pop can give Brandon Paul another shot when the opponents have a good bench scorer. There has to be a way to cobble together a sturdier defensive guard rotation.

Getting healthy would do the trick, but for now, Pop will have to continue experimenting.

Kyle Anderson played point guard his whole life. Then he entered the NBA. With the Spurs, he just never had a chance to show what he could do with the ball in his hands.

Recently, however, a lot more possessions have become available due to injuries. Anderson is getting a chance to handle the ball more, especially in the pick and roll, and he’s been doing a fantastic job.

That’s a great example of true point guard instincts. Slowmo snakes to the middle just enough to get his defender behind him — commonly referred to as putting the defender in jail — but not too much that he impedes Pau’s dive. Nurkic drops back and everyone stays home on shooters, following the Blazers’ scheme. Only Shabazz Napier cheats, because he’s guarding Murray.

Yet instead of launching a rushed floater, Anderson waits. It looks like he loses control of the ball, but he doesn’t. He rises up for a jumper, forcing Nurkic to finally commit. Then at the last second he finds Pau under the basket. Only true playmakers have the kind of patience Anderson showed there.

Slowmo has been really fun to watch in his fourth season.