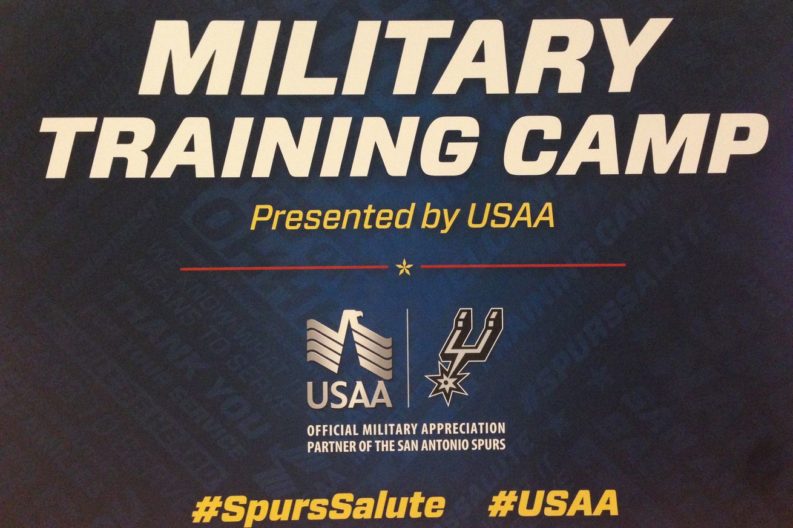 Why Military, U.S.A. is synonymous with San Antonio

Last Wednesday, USAA, the Official Military Appreciation Partner of the San Antonio Spurs, invited 50 locally based military service members for an unforgettable experience, a chance to train like a Spur. Assistant coaches James Borrego and Ime Udoka ran the troops through a Spurs practice- shooting and passing drills, play development, and even some 5-on-5 drills. Military members from all branches of the military, all walks of life, and a wide range of skill levels participated in the day’s events.

After the workout, the military members and their guests were invited to take an exclusive tour of the AT&T Center, visiting the Spurs locker room. They also had an opportunity to take their picture with the Larry O’Brien Championship trophies. The finale of the special day was a chance to meet Spurs announcer and legend Sean Elliott.

Tony Wells, who played alongside David Robinson for three years with the Midshipmen had recently made the move to San Antonio and joined the USAA team. “I’ve been a USAA member for 32 years. It really was a simple decision to come to USAA because I align with the values the company has- honesty, integrity, loyalty, and service. The event today really is to show appreciation to our service members.”

Wells was a graduate of the U. S. Naval Academy before becoming a marines infantry officer for five years. His time as a basketball player paired with his service to our country even more solidifies his belief that events like these are important because of what they say about the community and USAA’s role it in.

For those who are unaware, USAA offers banking, investing, and insurance to people and families who serve, or served, in the United States Military. As the military partner of the San Antonio Spurs, they offer opportunities for servicemen and servicewomen to attend games.

On USAA Military Appreciation Nights, active military receive 40% off of the price of admission. What I wasn’t aware of is that Spurs season ticket holders donate their tickets on these nights and hundreds of military have an opportunity to attend free.

The next Salute Night is coming up this Wednesday, March 23 as our San Antonio Spurs host the Washington Wizards. The discounted tickets can be purchased here.