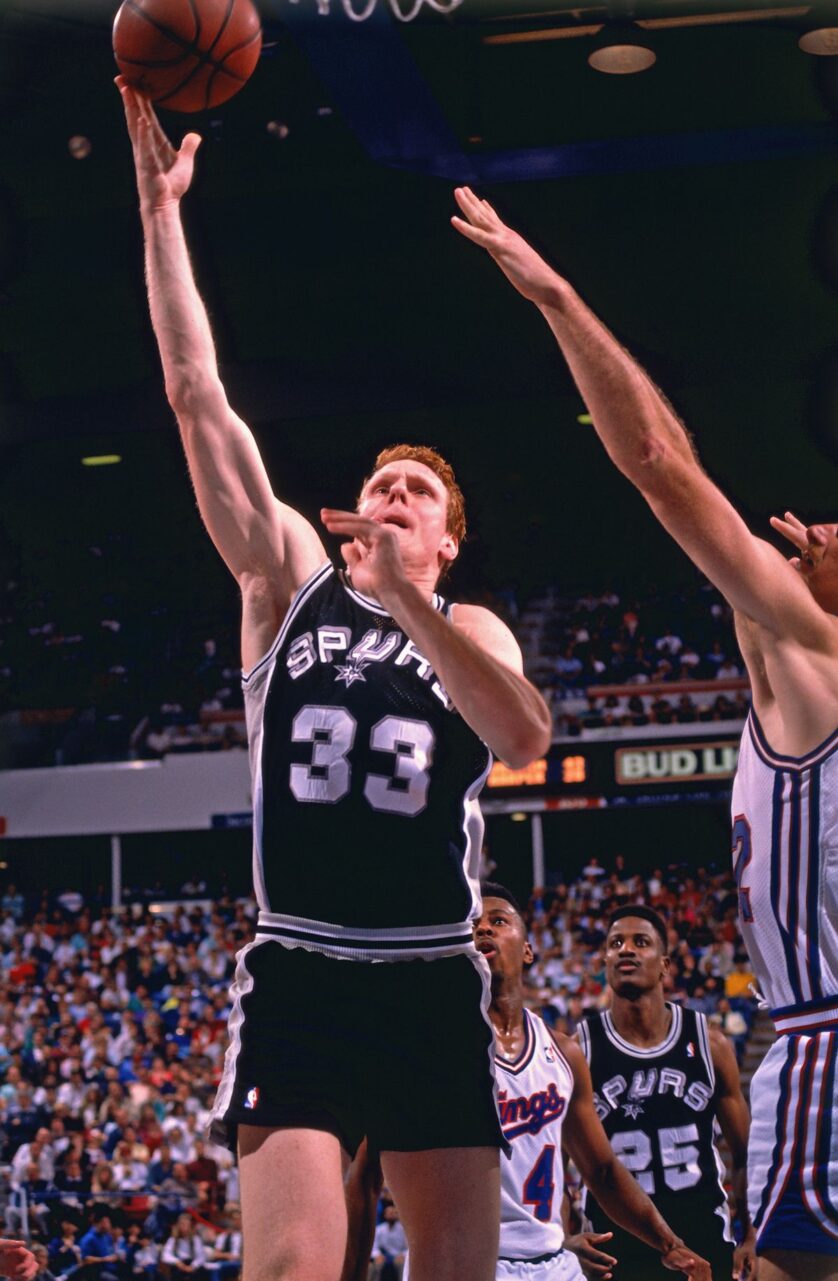 On Friday night, an unfortunate start to the Spurs/Mavs game saw the quick exit of Dejounte Murray due to a twisted ankle. Although not deemed to be serious, Murray was not to return.

For the first time this season, Tre Jones saw some non-garbage time action. That’s how the Spurs work. You better be ready, because you never know when Pop is going to call your number.

When I joined Pounding The Rock, I pitched a project that would cover every player who ever wore a Spurs jersey. Not equally, by any means, but each jersey would be identified numerically by the players who wore it.

There is only one jersey number associated with all five San Antonio Spurs NBA Championships- #21. Tim Duncan. He is coincidentally also the only player to be involved in all five titles.

Tre Jones is currently wearing #33. When he took his first photos in his new digs, we started a recap of the previous players to wear the jersey.

Today take us up through the Spurs maiden title run.

Possibly the funniest of names on this list, German center Uwe Blab was on his way out of the NBA when he played his seven games in San Antonio. He spent his first four seasons coming off the bench for the Dallas Mavericks, who drafted the Hoosier seventeenth overall in 1985. Low productivity sent him to Golden State briefly before returning to Texas. His fifty days with the Spurs were followed by a move overseas where he finished his career.

Dave Greenwood served two stints with the San Antonio Spurs. The UCLA Bruin went second in the 1979 NBA Draft behind Earvin “Magic” Johnson. The Bulls lost out on Magic by virtue of a coin toss.

Greenwood spent six seasons in Chicago before being traded to San Antonio for “Iceman” George Gervin. He wore #10 during his three-plus seasons with the Silver & Black before being traded along with Darwin Cook to the Denver Nuggets for Calvin Natt and Jay Vincent.

David picked up a championship in 1990 with the Detroit Pistons before heading back to San Antonio as a free agent. This is when he picked up #33. Greenwood stayed with the Spurs another year before retiring at the end of his twelfth season.

Jud Buechler passed through San Antonio playing eleven games between his two with the New Jersey Nets and fourteen with the Golden State Warriors that same season.

He was part of Michael Jordan and the Chicago Bulls second three-peat in the late 90s before retiring and heading into coaching. He’s been with the New York Knicks (see him with David “Take That For Data” Fizdale above) since 2018.

Cadillac returned to the Spurs for two seasons from 1995-1997. His second go-round with the Silver & Black were not as prosperous, though he was present during the transition into the era of Pop taking over as head coach.

The fourth overall draftee of the 1997 NBA Draft, Antonio Daniels spent his first season in Vancouver with the Grizzlies. On June 24, 1998, he was traded to the San Antonio Spurs for Felipe López and Carl Herrera. The next season, Daniels helped the Spurs to win their first championship.

Daniels spent four season with the Spurs averaging 7.7 points per game before being sent to the Portland Trail Blazers in a trade that brought Steve Kerr back to the Alamo City.

Although Daniels did not retire in San Antonio, he returned as he says “for love.” He married his wife here and made San Antonio his home. He continues to support the community and offer basketball camps regularly.

In fact, I had the opportunity to meet Daniels (and nab a selfie) when both Daniels and my band The Gunslingers were on Great Day SA on the same morning. We were promoting our music festival and he was promoting his basketball camp. Always a positive presence, Daniels continues to rep the Spurs and the culture he enriched.

NEXT UP: #33 only sees forty-five games over the next five season, but somehow manages to win another ring.