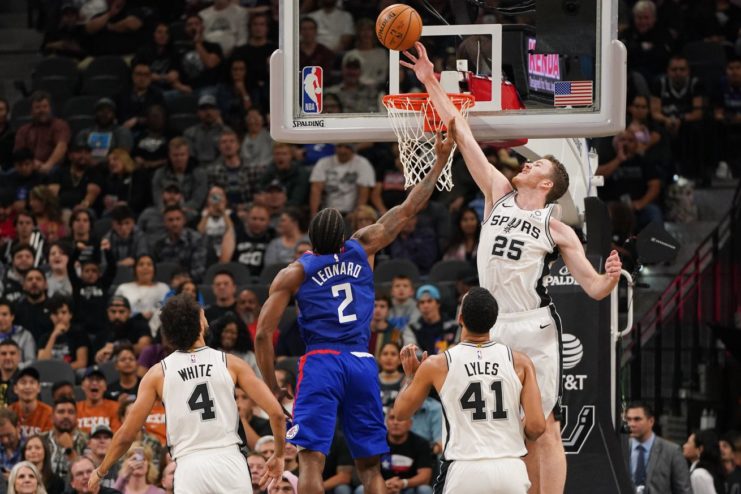 Now they just have to sustain the adjustments for sixty-two more games.

It’s never a question of whether or not the San Antonio Spurs will find themselves, but rather a matter of when. After suffering an eight-game losing streak and back-to-back home losses that set a tone of uncertainty among pundits, the Silver & Black played last night only to reveal the pieces necessary for a great season. Until then, they had yet to come together into one cohesive contest.

Let’s start with a question- is there a more hated active player in the NBA than Kawhi Leonard? As a Spurs fan, I have trouble pinpointing another player that other franchise’s fans despise more and the venomous boos rampant throughout the AT&T Center when él arañó in the house could be proof.

Leonard, who averaged 25.8 points per game coming into Friday night, scored a quiet 19.

Even quieter, Lou Williams, the three-time Sixth Man award-winner, was limited to 7 points, fifteen-and-a-half less than his average.

Quieter still, Paul George whose normal 24.8 points per game was stymied by the Spurs defense and held to 5 points in thirty-three minutes.

Considering the eight blocks between LaMarcus Aldridge and Jakob Poeltl, four a piece, the defense made some significant strides in order to hold the Clippers to under 100 points and less than forty percent shooting.

Bill and Sean mentioned that Leonard, George, Williams, and Montrezl Harrell average 92 points per game as a quartet. The Spurs kept them to 43 combined points on 18-of-56 combined shooting.

Derrick White hit a career high five baskets from beyond the arc.

And generally speaking, all the Spurs were in the zone from three. And we do mean ALL . . .

YOU LOVE TO SEE IT pic.twitter.com/4dL7zwlOEO

In fact, in typical Spurs fashion, the win did not land on one player’s hot shooting, but rather a team effort.

Hopefully, this will be a reminder that they were down and not out. This should serve as the turning point and not the outlier.

If anything, it should remind the naysayers and pessimists that even a rough start can be righted.

And if Pop has anything to say about it, this will become the new norm for the Spurs . . . again.

[On a personal note, if you feel like getting out this evening, make your way to Point Park & Eats on Boerne Stage Road from 6:30-9:30 as I croon the night away solo acoustic on some old school outlaw country, post-modern 80s, Motown, and some random 90s ditties. No cover, kid friendly, and killer eats.]