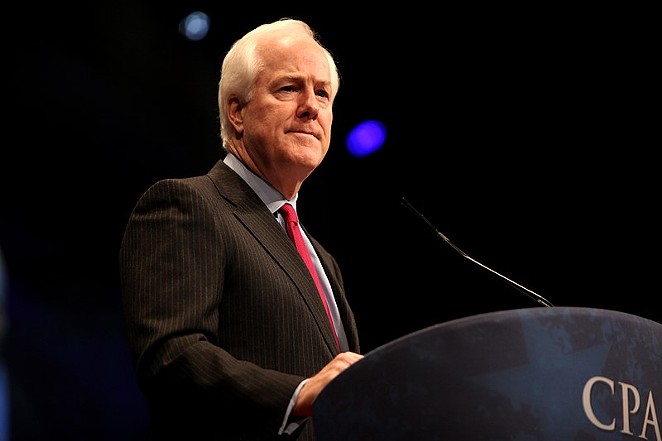 The state’s two Republican U.S. senators do better than Congress, at least in Texas. John Cornyn is doing a good job, according to 38% of the voters, and a bad one, according to 36%. Ted Cruz, with 45%, is winning the favor of more voters. Fewer than that, 39%, disapprove of the work he’s doing. Those numbers are largely unchanged from previous surveys.

“There’s just not much going on at all beneath the presidential level in politics,” Henson said. “That’s what you see in the Cruz and Cornyn numbers. They’re static.”

Republican Gov. Greg Abbott is in better shape than the president or either of the state’s senators, with 56% percent approving of the job he’s doing and only 32% disapproving. That’s an improvement over the February poll, when 48% approved of Abbott’s performance. More than half of the Democratic voters disapprove of the job the governor is doing, but 24% say they approve.

Lt. Gov. Dan Patrick gets good marks from 40% of voters and bad marks from 36% — numbers that are similar to what voters have said in previous UT/TT polls.

“Patrick’s numbers haven’t moved very much, but there has been a big uptick of disapproval in two groups, particularly from independents,” Blank said. “The other key group was registered voters over 65.”

Between the last UT/TT Poll in February and now, Patrick made national news when he suggested “as a senior citizen,” that saving the economy was more important than responding to the coronavirus.

In the February UT/TT Poll, 29% of voters over 65 disapproved of the job the lieutenant governor was doing; now, it’s 37%, up 8 points. Among independent voters, the swing was even larger, from 30% disapproval in February to 43% in the April survey.

Speakers of the Texas House are generally less well known to the general public, and Republican Dennis Bonnen’s ratings are confirmation: 20% approve and 24% disapprove of the job he’s doing; 28% neither approve nor disapprove, and another 28% didn’t register an opinion. Bonnen isn’t seeking another term in the House and will be replaced as speaker when the Legislature convenes in January 2021.

The University of Texas/Texas Tribune internet survey of 1,200 registered voters was conducted from April 10 to April 19 and has an overall margin of error of +/- 2.83 percentage points. Numbers in charts might not add up to 100% because of rounding.