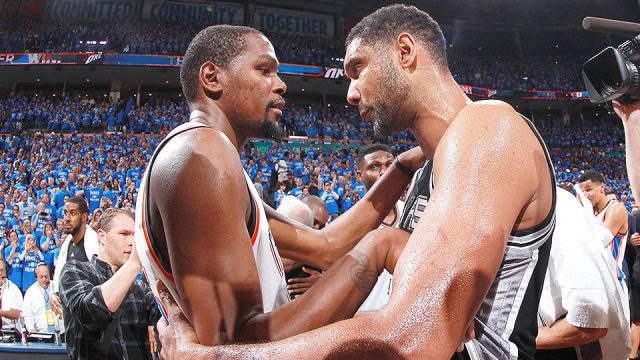 OKLAHOMA CITY — If the San Antonio Spurs fell off a cliff somewhere in the course of their second-round playoff series, it was because the Oklahoma City Thunder pushed them. Players age. Teams struggle. Games are lost to slumped shooting or flustered decisions. Yet Oklahoma City took a proactive role in bringing these facts of basketball life to the forefront in each of the final five games of the series, thereby forcing San Antonio to confront its every limitation. A 67-win team with a historic regular season point differential does not bend but by force.

The Thunder showed that force in spades. With each successive game, they stripped away at a few more elements of the Spurs’ offense. The fluid system that once delighted basketball purists devolved first into desperate pick-and-rolls and then into sputtering isolations. By Game 6, OKC defenders were on top of everything. San Antonio couldn’t manage a single three-pointer in the first half of its 113–99 loss. Set plays were recognized and snuffed out immediately while the creative abilities of Kawhi Leonard and LaMarcus Aldridge were pushed to their reasonable limits. There was ultimately nowhere left to turn.

Gregg Popovich, in classic elimination-game fashion, left no stone unturned. Little-used reserves Boban Marjanovic and Kevin Martin both played actual, competitive minutes before the game got out of hand. Boris Diaw was nixed from the rotation entirely. San Antonio started the second half down 24 points and in its smallest lineup of the series—a direct counter to the jumbo, bulk-rebounding lineups that had turned the series in Oklahoma City’s favor. The sum of those moves and the Spurs’ increasing desperation cut the deficit to 11 points in the fourth but no further. Just when it seemed San Antonio had ground the game into something manageable, Serge Ibaka obliterated a Tim Duncan layup attempt and triggered Kevin Durant for a fast-break dunk. A final air of decision came with it……Read More