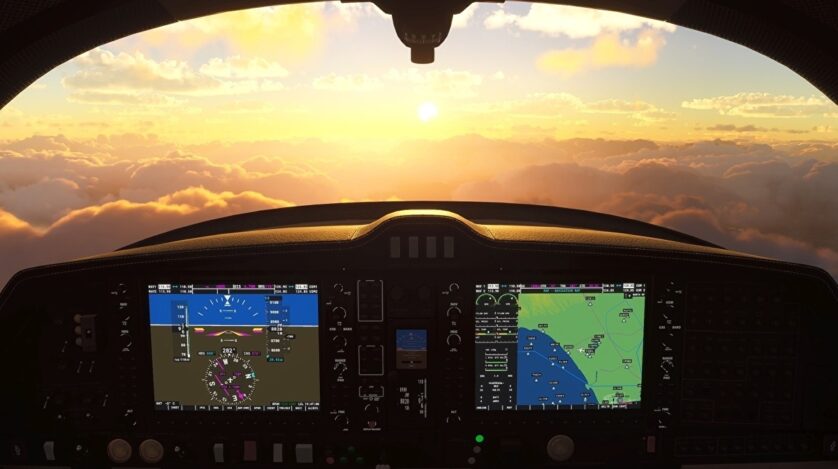 Taking to the skies in the all-encompassing VR update.

It’s already been quite a remarkable year for Microsoft Flight Simulator, the technically dazzling, gorgeously detailed celebration of all things aviation taking the sim mainstream, but the best has been left until the very last. The much-awaited VR update which dropped earlier this week does everything you’d hope for, and a little bit more besides.

As it’s getting on I won’t be able to go into full details until early next year, and apologies for the lack of capture – I spent yesterday in a tangle of cables as I got involved in the fiddly business of setting up a new headset, as well as being tangled in strings of Xmas lights as I put up the tree – but suffice to say Flight Sim in VR works a treat, the immersion it adds elevating it all to the next level.

Having initially been slated to debut on the Reverb G2, on which I’ve been trying it out, it’s commendable that the update is now available across all headsets. Indeed, convenience is baked into this update, with VR mode toggled on or off at any point with the press of a button. It demands a fair amount, of course – running on a 3070 I’m not able to come too close to the full resolution of the G2’s optics while maintaining a steady framerate – but it’s easy enough to find a sweet spot where the splendour of Microsoft Flight Sim isn’t diluted too much.

And what you gain is immeasurable. It’s similar, in its own way, to what you gain when playing a racing game in VR, only now it helps nail runway approaches rather than corner apexes. It helps you appreciate the overwhelming detail of Microsoft Flight Simulator’s cockpits and cabins (there’s something almost spiritual about seeing the interior of a 747 in VR for the first time), so it’s a small shame that there’s no VR controller support that might allow you to tinker with the controls. That’s due in a future update, mind – but it does mean the already bewildering task of flying a commercial airliner is that bit trickier unless you know where to find all those important key bindings while wearing a VR headset.

Being a passenger’s fun enough, though, and it’s even possible in smaller planes to pop out of the pilot’s chair and walk back into a window seat. Just watching the world roll by is one of the great pleasures of Microsoft Flight Sim, something truer than ever when you push your face against the virtual glass and look for glimpses of the landscape in between the clouds.

That heightened sense of emotion familiar to those who used to indulge in long-distance is there in all of its glory – which might explain the tingle I felt when gliding an A320 Airbus home over the snow-covered countryside of France on approach to Charles de Gaulle, an incredible glimpse of the wider world that really began to feel something like Christmas. Which it very nearly is, so apologies for keeping it brief. What a neat little gift this is from Microsoft and Asobo, though – and I can’t wait to discover more.