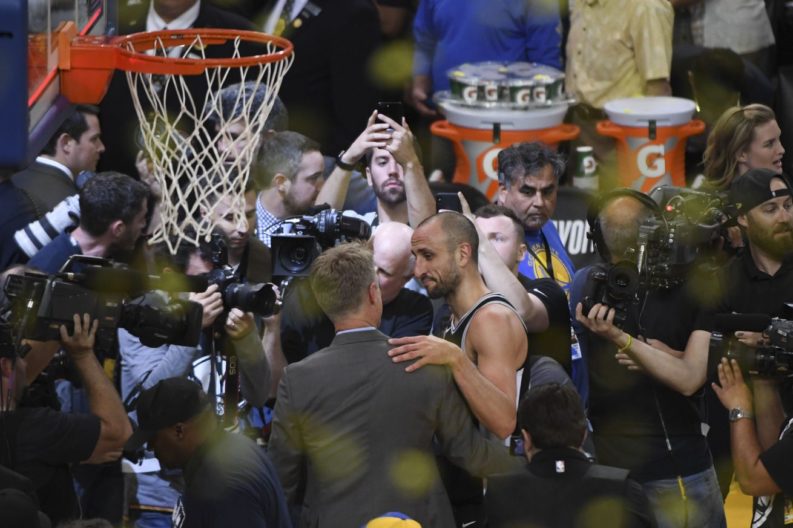 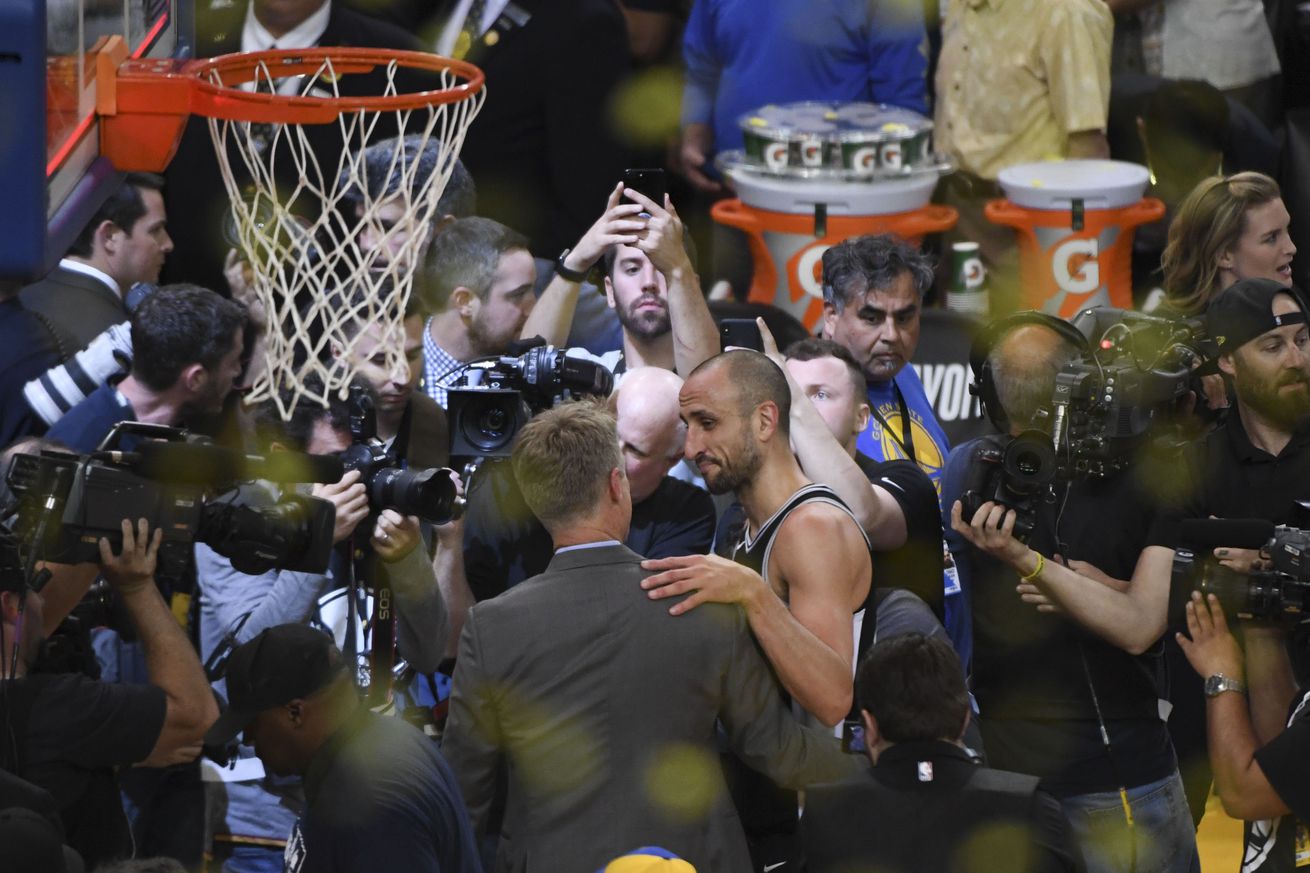 The newly retired Spur addressed the media on Saturday, reflecting on his career, his coaches and teammates in San Antonio, and what he’ll miss most from playing the game.

After a taxing 16th NBA season, followed by a summer of leisure and contemplation in the Pacific Northwest with his wife and three sons, Manu Ginobili insists he was sure of his decision to finally move on from basketball — one that was, in many ways, at least a year in the making. And yet, the weight of finalizing that choice wasn’t lost on his nerves as he announced it via tweet:

“My finger shook as I hit enter… It wasn’t an easy decision, in the sense of after 23 seasons of doing this it was hard to put that last nail in that coffin.”

He didn’t want to break the news in a press conference — simply getting it out in a way he wanted, he said, would be hard enough:

“I didn’t want to [speak to the media] right away. I didn’t want to announce it with this type of environment, with all the things going on in my head, because even though I was — I am — very sure about the decision, it’s is still awkward, it’s still tough.”

The 41-year-old entered the 2017-18 season with the likelihood that it would be his last, although he waited to see how he physically felt afterward to make his decision:

“I took last season mentally as my last season. So every place I went and every situation I kinda knew it was gonna my last one, but I left the door open just in case. Because you know, if after a month or two on vacation… I felt like I needed it, I would give it a try. But slowly that door started to close more. I couldn’t see my body going through that kind of grind again. I felt like I had a good season, like I left everything I had. Both physically and mentally. When I came back here, when I came to lift and bike or whatever, I saw Bryn, I saw Dejounte preparing for the season, and I was so far from that. I said, ‘This is it.’ If there was a little of that door open, it closed pretty quick. I couldn’t see me getting ready for another 82-game season—” He paused, then corrected himself with a smile: “65 in my case.”

Weeks removed from the big announcement, retirement seems to be suiting Ginobili splendidly. Rather the usual bruises, gashes and ice packs he’d sport after a hard-fought win, he stood before a familiar cast of reporters and cameramen looking considerably tanned, at ease, and visibly excited for the new stage of his life. He spoke of summering in Argentina for the first time in 20 years, of being a more “predictable” father to his sons, and the unpredictability of just about everything else that lay before him. He said he’d remain in San Antonio in the coming months — “If any of the newer guys want to talk to me, I will be available. I will be around.” — however, those hoping for a pivot to a Spurs coaching role can probably pump the brakes — for now, at least:

Ginobili said his family was fully supportive of his decision to step away from basketball, save for one his twin sons, Nico:

“When we asked the kids what did they think, if they were excited that Dad is not gonna be traveling as much, that we were gonna be able to go to Argentina, they said, ‘yeah’. But… he said, ‘I don’t want you to retire, Dad.’ [I asked,] ‘Why?’ ‘Well, the chicken tenders in the family room are awesome.’”

When asked what he might miss most from his playing career, the response from the NBA’s ultimate teammate should surprise no one:

“I don’t know if it’s because this is what I think or what I’ve heard from everybody who’s not playing anymore, but I think it’s the locker room, the camaraderie, the inside jokes, the winning together or losing together thing, you know. You support each other, you create a solid group, And that sense of community and purpose in a basketball game is fun, it draws people closer. I’m sure I’m pretty gonna miss that.”

He was asked about the most memorable moment of a career that’s spanned three continents, as well as both club-level and international play. Despite being unable to narrow it down to a singular answer, there was one — from the last stage of his career, he noted — that came to mind:

“The 2014 championship was outstanding. Emotionally, I said it many times but I was carrying and luckily for a year only, because some people carry that backpack for ever, but I was carrying a very heavy load on my back for a year. To help accomplish that goal was huge, so very important moment of my career, and especially with the Spurs. We did it with a great team, a team that played great and a fun way, altruistically. And I was already older — when I got here and wont the the first championship, I didn’t appreciate it; I didn’t know what was going on, how hard it was. At 37 and after a couple frustrating moments when we were very close, that was very fulfilling and a big joy.”

When asked about his fellow Big Three member, Tony Parker, and his surprising change of scenery for the upcoming season, Ginobili’s sentiments seemed to echo pretty much everyone else’s:

“Very odd,” he answered. “I talked to him that week and it was an impossible situation with how the team was built and what we saw last year. But I understand the decision he made. He still feels that he can contribute more on the court, he went to a place where he knows the coach, respects him, likes him, the coach wanted him, has friends on the team. So, it’s understandable, it was hard. Once I saw the news — he told me before it might happen — when you see it written, it’s a shock. Still, nothing deletes or cancels what we went through together and having the opportunity for three guys to play on the same team for 14, 15 years. For him it’ll be a fun challenge, too. Here, he only knew one thing and he’s gonna learn, he’s gonna grow as a player and man, and he’s gonna live other experiences, so it’s good.”

Ginobili was asked who, in addition to Parker and Tim Duncan, had helped him become the player he was — to which he reeled off a short list of names that reflected the length of his career in the NBA: veterans like Bruce Bowen, Brent Barry, Steve Kerr, Steve Smith, Kevin Willis, and coaches like P.J. Carlesimo, Mike Budenholzer, Brett Brown, Mike Brown, along with, of course, Gregg Popovich.

That final figure was essentially a given in the way Ginobili spoke about his tenure with the team, and his decision to finally move on. He touched on what next season might be like for Pop, coaching a team that doesn’t include himself, Parker or Duncan.

“I think it’s gonna be maybe awkward for him sometimes,” he answered. “Going at halftime, when he does his thing, not seeing us around. At the same it’s gonna be a challenge, to learn more about the new guys, to see what buttons to push. With us, it was already too easy. He knew us too well. I think it’s gonna be a great challenge to him maybe less corporate knowledge, we always talk about, but still young with energy and wanting to prove a lot of things. It’s gonna be a fun challenge. I think he’s gonna do good.”

Ginobili famously accepted a bench role on Popovich’s teams, a sacrifice that he was asked about:

“At the beginning it was kind of hard — it took me a while to understand it, to get my ego out of the middle between Pop and me or the game and me, and just do what has to be done for the team to be better. At the beginning it’s a tough one. Once you get the ego thing out of the middle, I understood that that was my role, that it was gonna be better for the team. I always loved it, except maybe the first year.”

Ginobili knows his journey from 57th overall pick in 2001 to one of the most beloved players in Spurs history is unlikely, and exceeded every expectation he could’ve had:

“Impossible. I came here very excited, fulfilling a dream and knowing that I had a lot of things to improve on. First of all, I never expected to be playing til 40. Never expected. Once you get to the NBA, you say ‘I wanna do good, I wanna play, I wanna eventually win a championship.’ But everything that happened afterwards is, you know — I already came here as a vet. I was 25. I had already played a lot of years overseas and, having played another 16 seasons here is completely unexpected. And having gone through everything we went through — big disappointments, huge wins, you know, creating a type of union with the coaching staff, with the front office, with the staff, teammates — it’s been an amazing journey, as I said it, way beyond anything that could be expected I don’t think anybody grows up expecting anything like this — it just happens to some lucky people.”

When asked if there was anything he felt like hadn’t accomplished in his basketball career, Ginobili quickly answered no. Certainly, he could’ve won another championship for his NBA team, European club, or international team would’ve been nice — “But what would it have changed?” he asked. “Another star on the resume — totally irrelevant — but what matters aren’t the titles; the most important are the stories, the experiences, the friends, the learning from the good moments, the bad moments that make you a better person, a better father, a better husband, a better citizen. Yes, I was extremely fortunate to win many things at different levels, but if I hadn’t, it wouldn’t have changed much.”

Such was the underlying spirit of Ginobili’s media availability on Saturday, as a former player brimming with appreciation for what he’d been able to experience and gratitude for those who helped him along the way, and as a man who’s fully ready for whatever was in store for life beyond playing the game he loved — even if he has little idea what that entails. One of the game’s greatest improvisers is no longer limited to a 94” x 50” court for what he can accomplish.

“At this point, I’m not—” he paused. “I can’t believe I was a player like four months ago. I feel like I’ve been retired for longer. I am very convinced and excited about the decision of, you know, doing other things, spending more time with my family, being more predictable as a dad, knowing when I’m gonna be around and not. It seems fun.”