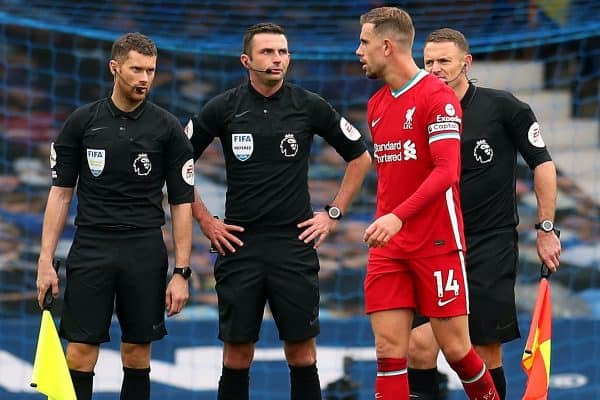 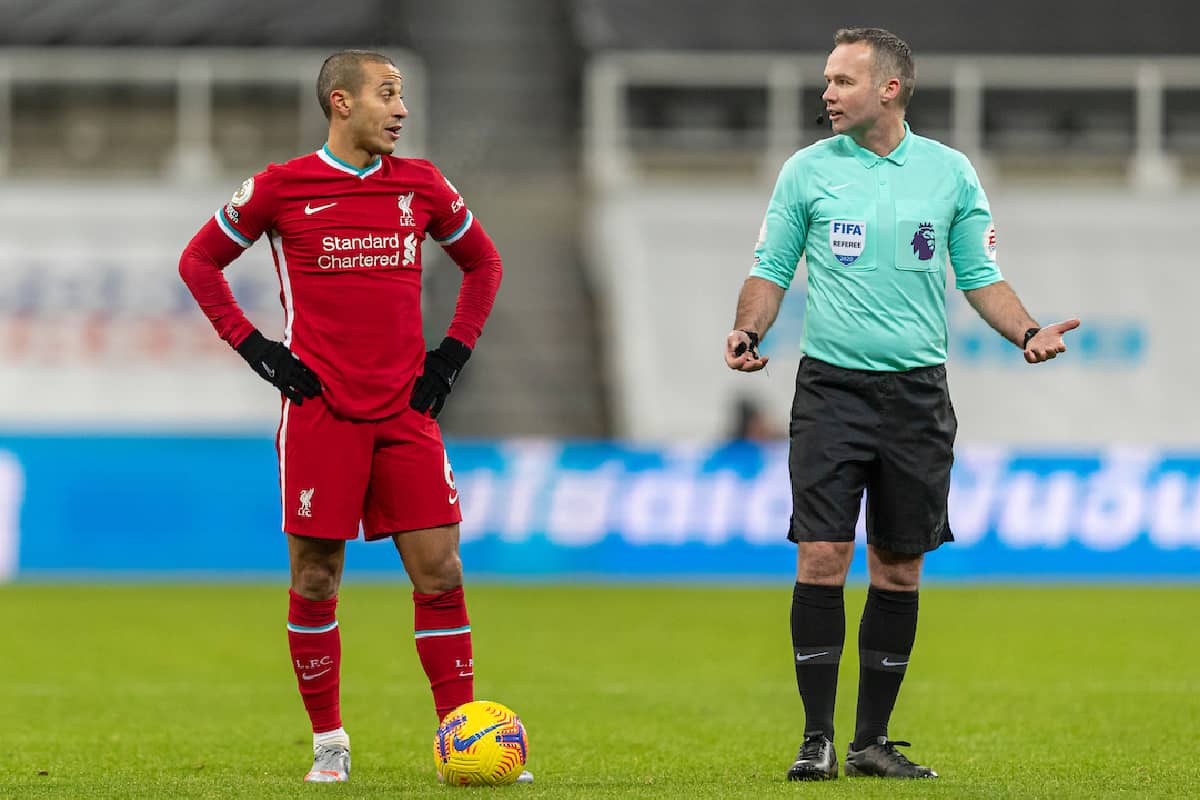 Liverpool fans have questioned the decision to appoint Paul Tierney as referee for Sunday’s meeting with Man United, owing to his recent history of penalties awarded.

Tierney has been given duties for the upcoming title clash, with Stuart Attwell appointed as VAR and Craig Pawson as fourth official.

It is the third time Tierney has refereed a Liverpool game this season, following the 2-0 win at Chelsea in September and the 0-0 draw away to Newcastle at the end of December, and his 14th time overseeing the Reds overall.

Liverpool’s record with the 40-year-old blowing the whistle is eight wins, three draws and two defeats from 13 games, with only Bournemouth (nine) and Man City (13) recording more victories in fixtures he has refereed.

But one statistic has been noted by Reds supporters as a concern ahead of the derby at Anfield, with Tierney having never awarded the club a penalty in those 13 games.

Interestingly, he has only once given a penalty against Liverpool, too, that being Jorginho’s failed spot-kick at Stamford Bridge earlier this season.

As Liverpool writer Stephen Drennan pointed out, however, Tierney has given United five penalties in his 13 games in charge of the Manchester club – the joint-most of any side, along with City:

Paul Tierney has awarded Manchester United 5 penalties in his last 10 matches – and 1 against.

He has awarded Liverpool 0 penalties in 14 matches – and 1 against (Chelsea).

His place of residence is “Lancashire” according to Transfermarkt. https://t.co/QOO6011ww5

Those five have all come in the last 10 United games he has served as referee for, and all in the last two years, with other Reds fuelling the speculation on Twitter:

Paul Tierney is the ref on Sunday.

So we’re starting the match 1-0 down from a Fernandes penalty in the 24th min (no VAR review was required, it’s United)

Always against us. Typical.

Meanwhile, one United fan pointed out a brilliant coincidence:

In reality, accusations of bias are made against almost every referee that is appointed to a Premier League game – by both sets of supporters – but Tierney’s record is notable given the recent back-and-forth between Jurgen Klopp and Ole Gunnar Solskjaer.

“I hear now that Manchester United had more penalties in two years than I had in five-and-a-half years,” Klopp said after the 1-0 loss to Southampton.

“I’ve no idea if that’s my fault, or how that can happen.”

Solskjaer responded by saying: “I don’t count how many penalties they’ve had, so if they want to spend time on worrying about when we get fouled in the box…I don’t spend time on that.”

Klopp has previously expressed frustration at Tierney’s officiating when the referee missed a clear foul on Gini Wijnaldum in the 2-0 victory over Aston Villa in July, but his criticised was met with a response from Tierney that he was “going to make mistakes” and to “get over it.”

Referees are certainly put under considerable pressure in their line of work, but Michael Oliver’s recent admission that he should have sent Jordan Pickford off for his season-ending challenge on Virgil van Dijk shows they are fallible.

Interestingly, LFCTV commentator John Bradley has pointed out that Tierney is “not even a Champions League referee,” arguing that “you would normally expect one of those to be in charge of a game between the top two.”

It can certainly be put forward that referees would not break into the top tier of the Champions League if they are not tested in fixtures of this magnitude, of course, and the hope is that Sunday’s clash goes by without controversy.