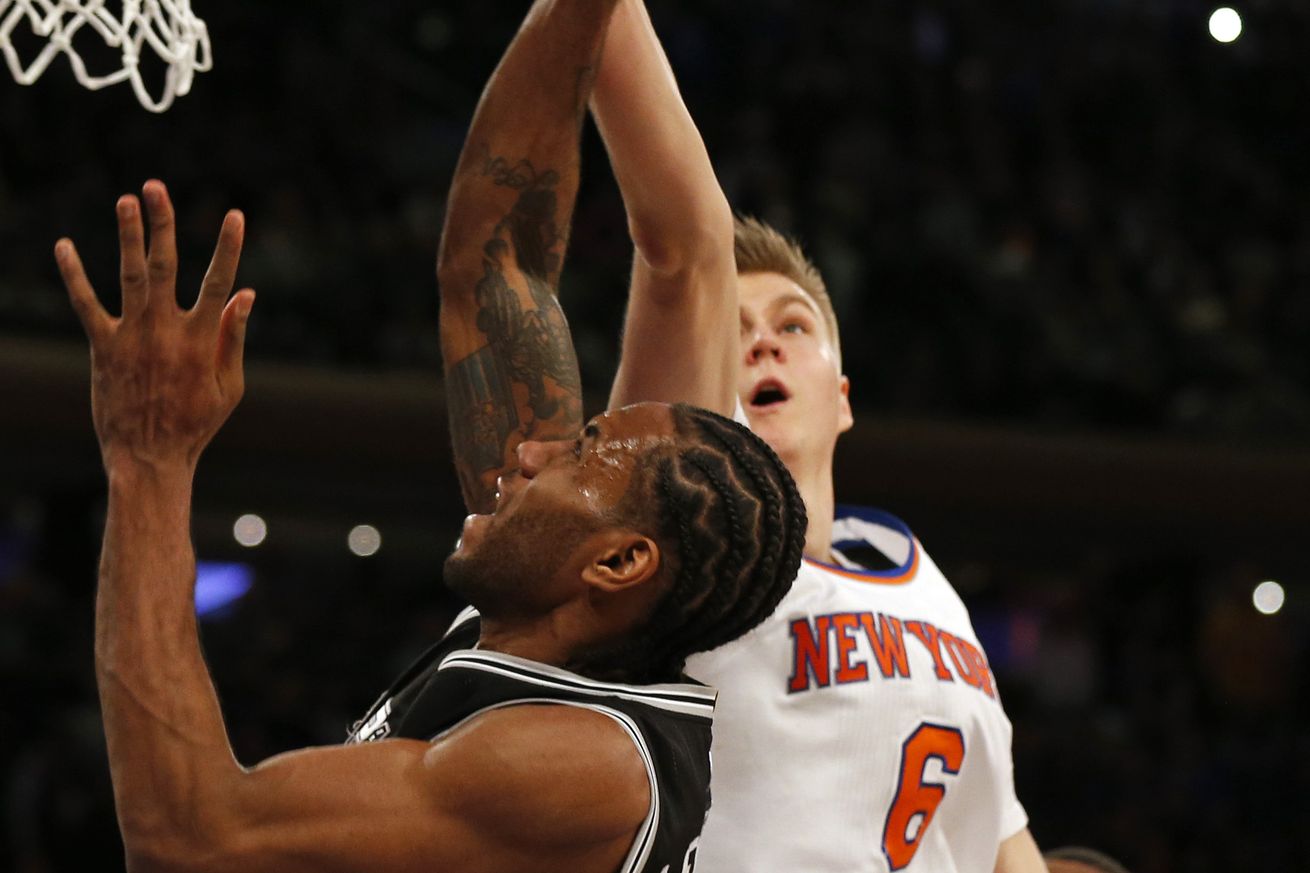 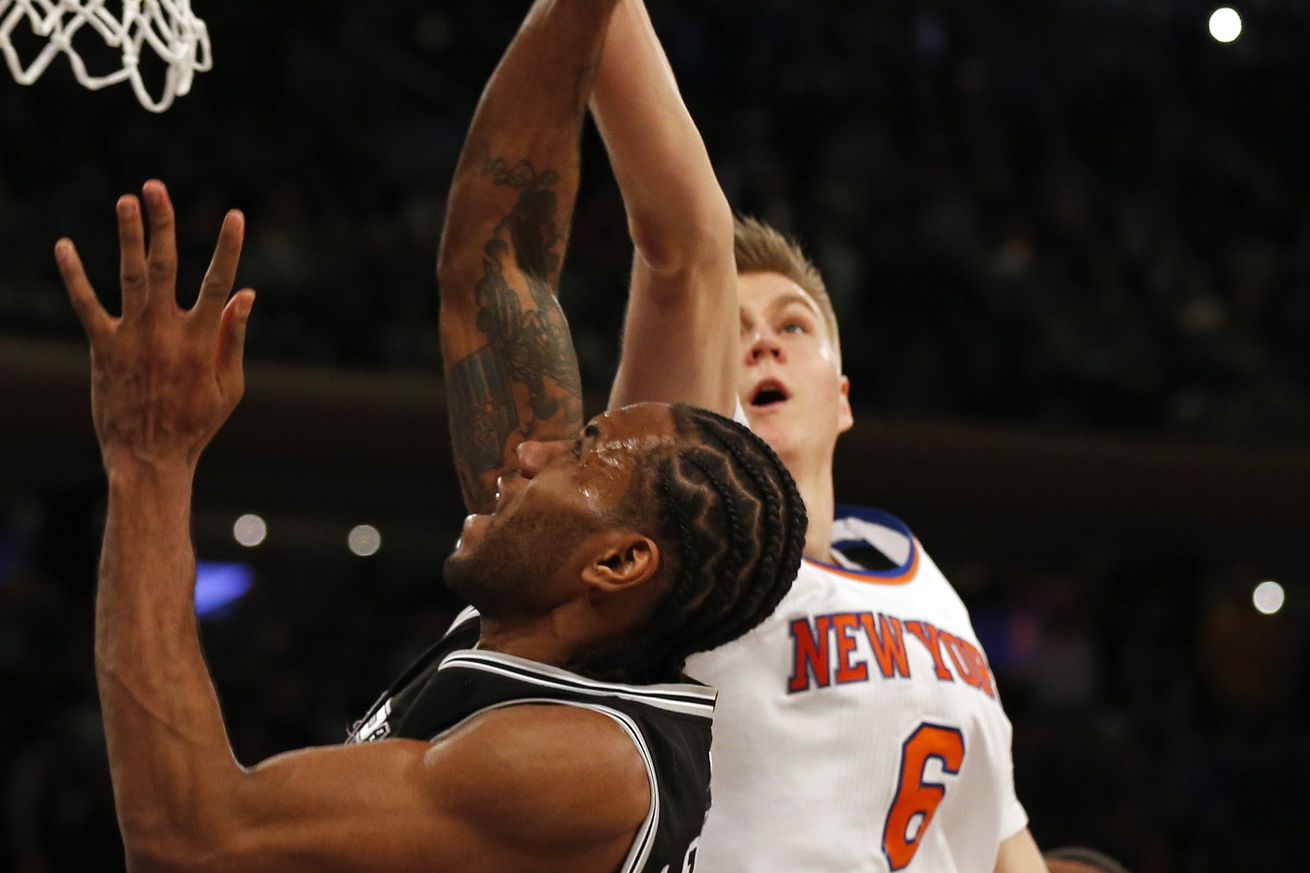 The Spurs have been depending on Kawhi Leonard to carry the team to wins this year, but that doesn’t work when the rest of the team isn’t really playing.

Sometimes it feels like the Spurs have become a one man team this year, and when everyone else plays poorly, they’ve depended on Kawhi Leonard to bail them out for a win. This afternoon, the guys in Silver and Black found out the limits of that strategy, when a dominant game from Leonard wasn’t enough to pull out a win against a Knicks team that had been reeling from all kinds of drama—involving players, former players, and even the team’s owner.

Tonight, the Knickerbockers came to play basketball, and the Spurs didn’t. They prevailed with good performances from their superstars—Derrick Rose, Carmelo Anthony, and Kristaps Porzingis—but the difference may have been a strong game from Willy Hernangomez, on just his second start, scoring 12 points and making key defensive plays.

The Spurs still had a chance late in the game, trailing by just two points with three minutes left, but a key turnover by Patty Mills effectively ended the comeback, turning a 3 on 1 Spurs fast break into an open three for Anthony. Essentially a 5 point mistake. The Knicks hung on for the win, with Carmelo and Rose hitting key baskets down the stretch and the Spurs missing everything.

The game started off with the Spurs dominating the boards, and even though they couldn’t shoot worth a damn, they were able to slowly add to their lead as the Knicks seemed willing to let the Spurs control the game. But Kawhi was out of sorts and he had trouble with getting open shots over Kristaps Porzingis, who stymied him with his length. But nevertheless, the Spurs were able to build a cushion, leading 48-36 with just over two minutes left in the half. It was looking like a game that the Spurs might win despite their listless effort. But the Knicks finished the half strong with a 6-0 run led by Derrick Rose driving strong to the basket. Despite taking a league low 29 shot attempts in the first half, the Knicks were only down by six points going into the locker room, 48-42.

The Knicks started the second half as they had finished the first. Playing aggressively and taking the ball to the Spurs, they scored the first 9 points of the third quarter and led 51-42. At the start of the game, the arena had been eerily quiet, but the Knicks run gave them energy, and the Knicks fed on it, too. Kawhi finally got into the game and began to pull the Spurs back into it, singlehandedly evening the score again and again as the quarter wore on. But the Spurs shooting was cold again, and the Knicks scored the last 4 points of the quarter and led 69-65 going into the final quarter.

This still felt like a game that the Spurs were going to win, given the Knicks’ uncanny propensity for losing close games, but they persevered throughout the final 12 minutes. The Spurs were surging late and looked like they had a chance to steal the game with 2:54 left as Patty Mills stole the ball from Derrick Rose and took it up the court for a fast break. But he lost control of the ball, right into the hands of Courtney Lee who passed the ball to a wide open Carmelo Anthony who sank the three point shot. What looked like it was going to be a tie game was suddenly a 5 point lead for the Knicks. The Spurs did what they could to close out the game, but the Knicks, led by Carmelo and young Willy Hernangomez hit their shots to close out the game, and the Spurs missed theirs. Game over, man, game over. This one felt like the Spurs gave one away, but that doesn’t give enough credit to the Knicks, who took advantage of every opportunity that the Spurs gave them.

Music to read recaps by

(This band is called the Knickerbockers)

The Spurs record is now 41-13 and they are in second place in the Western Conference. Their record on the Rodeo Road Trip is now even at 2-2, and they have 4 more games to play before they return to San Antonio, starting tomorrow night at 6:00 pm against the Pacers on FSSW. [NOTE: corrected time] Then they go to Orlando on Wednesday to play the Magic at 6:00 pm in their last game before the All Star Break.