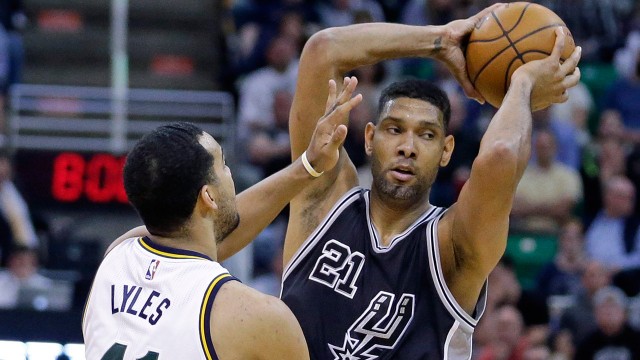 SALT LAKE CITY — The Spurs won again during their best regular season ever, just as Tim Duncan has done 1,000 times in his career.

Kawhi Leonard made the go-ahead jumper with 4.9 seconds left and scored 18 points as the Spurs beat the Utah Jazz 88-86 on Tuesday night, giving Duncan a milestone victory.

Rodney Hood missed the potential winning 3-pointer at the buzzer as Utah fell a half-game behind Dallas for seventh place in the Western Conference. The Jazz remained in the No. 8 slot and a half-game ahead of the Houston Rockets.

“They played with a lot of energy,” Spurs coach Gregg Popovich said. “They were very aggressive and I thought they moved the ball much better.

“We were very lucky to win. They actually played better basketball then we did.”