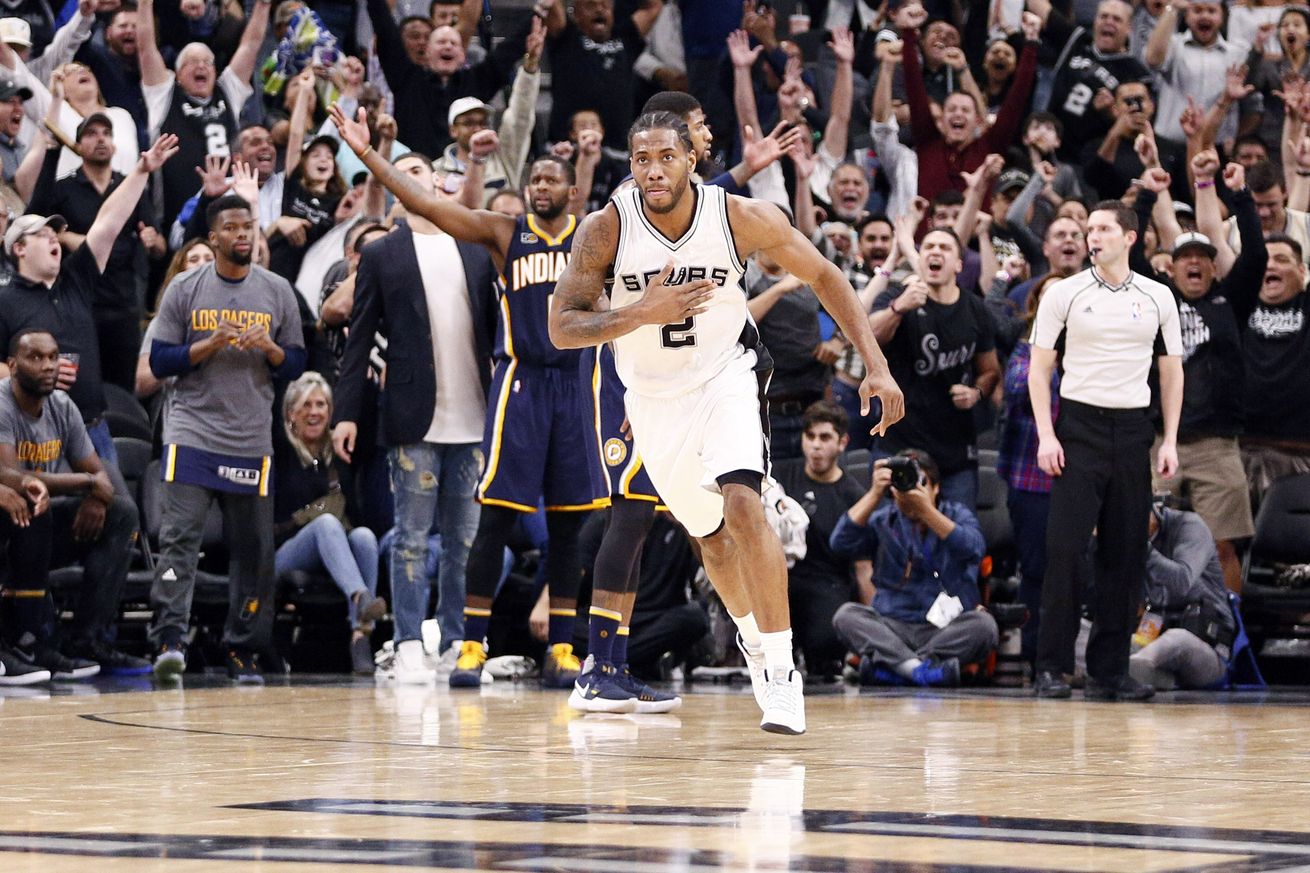 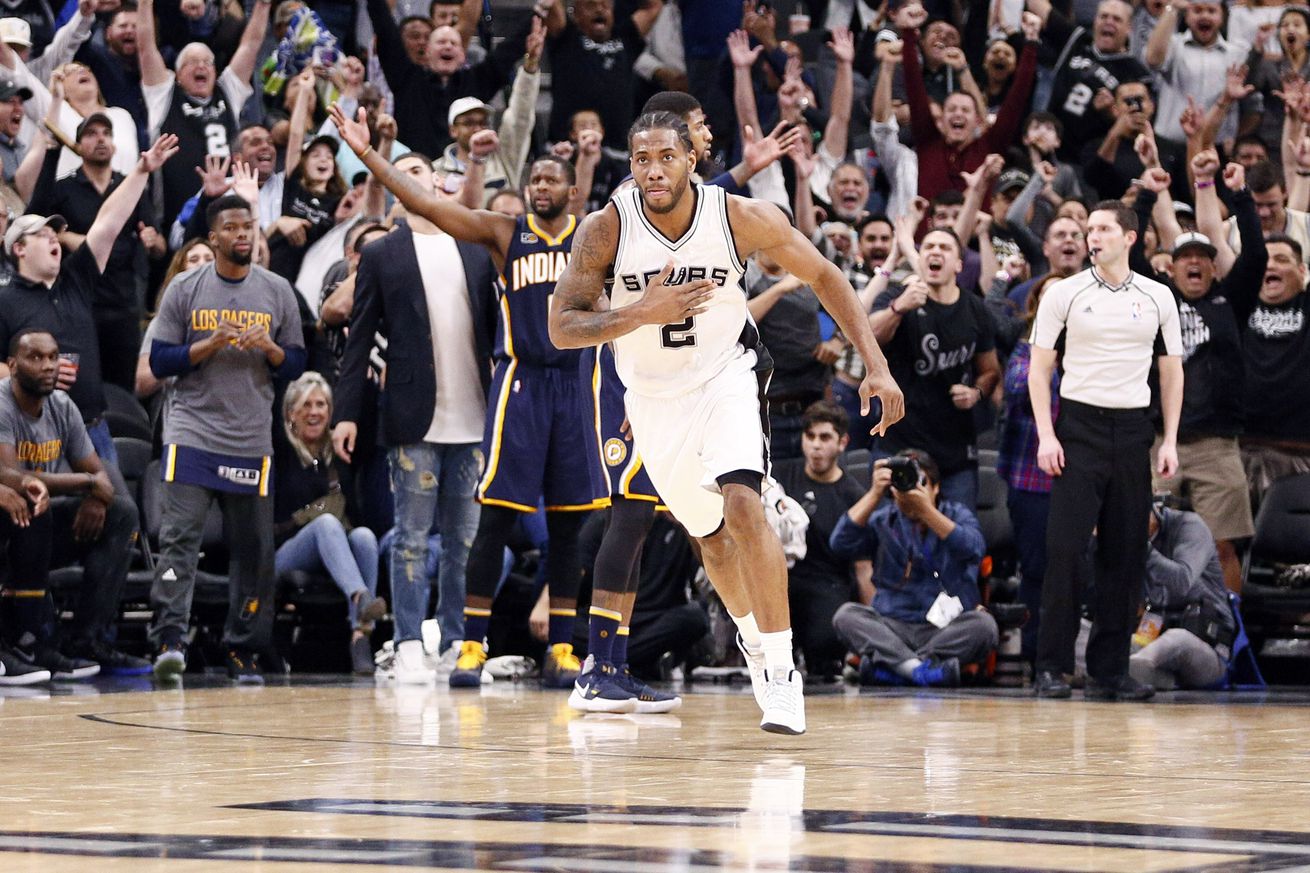 The game didn’t really go the way the Spurs would’ve drawn it up — until theit decisive final possession.

Kawhi Leonard curled around a LaMarcus Aldridge screen, temporarily freeing himself from the shadow of Paul George, skirted the baseline, and received the inbound pass from Pau Gasol. Taking his time, he backed George down on the left block (where he’d scored on him earlier on a nifty baby hook), faked one way and turned over his right shoulder. The shot went in, and the Spurs took the lead 100-99 with 2.9 seconds left. The Pacers got one last look at the basket, but George’s three hit the front side of the rim and bounced out as the final horn sounded.

Kawhi Leonard with the go-ahead bucket to win it for Spurs #gospursgo pic.twitter.com/7P6kAbNRYv

It was, as Leonard said after the game, a shot he practices often, and it was one of the few things that went as planned on a wild night of basketball.

The Spurs, who were missing their orchestrator Tony Parker (out with a quad bruise) had just 20 assists to 18 turnovers and struggled to find cohesion offensively. Rookie Dejounte Murray got the start in place of Parker, and continued to show promise as a rookie who looks comfortable operating in the San Antonio system. He connected with David Lee (who went a perfect 8-of-8 from the field) multiple times and finished game with a +6 plus-minus. Yet, an errant behind-the-back pass by the 20-year-old late in the third quarter led to a swift benching by Pop and it was mostly Patty Mills running the point for the rest of the night.

Pau Gasol came off the bench for a third game in a row since returning from injury, and it appears both he and Pop are happy with the starting lineup as it is for the foreseeable future. The Spaniard had another strong performance, scoring 18 points on just seven field-goal attempts (he was also 8-of-8 from the line), including 2-of-4 from three-point range. Gasol’s been maligned for his defensive shortcomings this season but, to his credit, he came up with some big plays in this one, including two blocks in the third quarter.

Yet, the Spurs couldn’t seem to get out of their own way for much of the night. When it wasn’t miscues in the pick and roll, it was miscommunication on defense. C.J. Miles found himself wide open on back-to-back threes from the same corner early in the second half, which would give Indiana the largest lead any team would have on the night, at 56-47.

On a night when all starters not named Kawhi combined for just 19 points (LaMarcus Aldridge had just 6 on 3-of-9 from the field), the bench was crucial throughout. Gasol and Lee led the way with 18 each, but Manu Ginobili also had some timely plays, finishing with nine points. Overall the bench accounted for 50 points, and now with Gasol a part of that unit, you’d be hard-pressed to find a better bunch around the league.

Still it was Kawhi Leonard who remained the gold standard for consistency, putting together another MVP-caliber night (31 points, 10 boards, 3 steals), capped by that cold-blooded final shot. He shared the defensive duties of guarding George with Danny Green, who was incredible as always on that end of the floor (3 blocks, 2 steals), even if his shot wasn’t falling.

All in all, it wasn’t a pretty win for the Good Guys, but it was a win all the same. Even if you’re not looking too much at the disparity between first and second in the West, it’s good for the Spurs to keep the pressure on the Warriors as they look to stay sharp without Kevin Durant for at least a month.

Up next for the Spurs are their inter-division bugaboos, the Pelicans, who got their first win of the Boogie Era last night against the Pistons. They’ll play in the Bayou on Friday, where San Antonio will look to drain the swamp and push their winning streak to six.