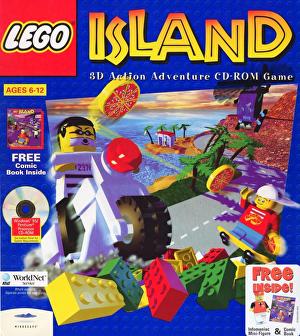 Mindscape, developer of the iconic 1997 Lego game Lego Island, laid off the project’s team to avoid paying them various bonuses.

The small team which built Lego Island had worked on the game for two years and had already begun work on an underwater-set follow-up. But when it became clear how successful Lego Island would be, Mindscape bosses took action to avoid paying them their contracted royalties.

It’s an eye-opening detail dug into by Lego Bits N’ Bricks, a new and officially-sanctioned podcast series from the Lego Group which is being released episodically to celebrate this year’s 25th anniversary of Lego joining the world of video games.

The most recent episode of the series charts the Lego Group’s long and slightly stubborn journey to joining the world of video games, and the release of Lego Island, its most memorable early title.

Documentary maker Ethan Vincent and games journalist Brian Crecente talk to various people employed within the Lego Group at the time, as well as those who worked on Lego Island itself.

“When the game came out, we knew that it was going to be big,” Lego Island senior producer Scott Anderson said. “We have a terrific program in place for bonuses, for the team. And when the game came out, rather than pay off the, uh, the people who work on it, I mean, they sold like a lot of copies in the first day. And so they owed us royalties, they owed us a lot of bonuses and they decided that they would fold the company rather than pay us. So they fired the whole team, and then they folded the company.”

Crecente added that this is an account he had heard from numerous people connected with the project that he had spoken to, while researching the Bits N’ Bricks podcast series.

“They believe that the company did not want to have to pay out those bonuses,” Crecente commented. “So they fired everybody before it started selling. Absolutely terrible.”

While Mindscape would continue on under new management after the company sold itself, the Lego Group did not contract the developer again for Lego Island 2, or any further project. And, sadly, without the original team on board, Lego Island’s sequels never lived up to the original.

Away from that anecdote, there’s a lot of nostalgia on offer in the episode, even just via audio – hearing Lego Island’s opening theme again, or its “L.E.G.O. Radio” jingles is a real treat.

Before getting to Lego Island, I found it interesting to hear hear how Lego executives had to be convinced it was worth entering the video games business at all – and that it was eventually a combination of both internal encouragement from the company’s own R&D department and an external pitch from Mindscape, Lego Island’s eventual developer, that got Lego top brass on board.

Future episodes of Bits N’ Bricks will go into more detail on the earliest internal ideas for Lego video games, and move onto the brand’s long partnership with TT Games, as well as other projects such as now-defunct MMO Lego Universe.