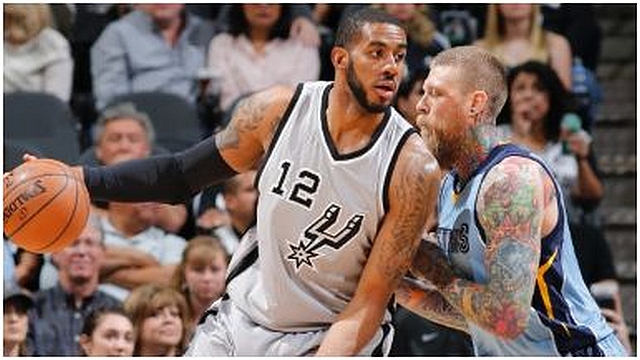 LaMarcus Aldridge erupted for 32 points and 12 rebounds as the Spurs raced to a 110-104 victory over Memphis Friday night at the AT&T Center clinching the No. 2 Western Conference seed in the upcoming playoffs.
The Spurs claimed their 37th consecutive home victory to start this season and also their franchise-best 46 regular-season home games dating back to last season.
The victory came despite four key San Antonio players missing from their rotation before a back-to-back tomorrow night in Oklahoma City. All-Star forward Kawhi Leonard missed the game with a right quadriceps injury and Danny Green, Boris Diaw and Patty Mills all missed the game with rest.
The Grizzlies made it tough, pulling within 94-92 on a Chris Anderson hoop with 7:03 left. But San Antonio answered with a run of 13 consecutive points punctuated by a pair of 3-pointers by Manu Ginobili to salt the game away.
Tony Parker added 14 points and five assists and Kevin Martin and Ginobili added 13 points apiece. Tim Duncan chipped in with 12 points, eight rebounds and a game-high seven assists…….Read More