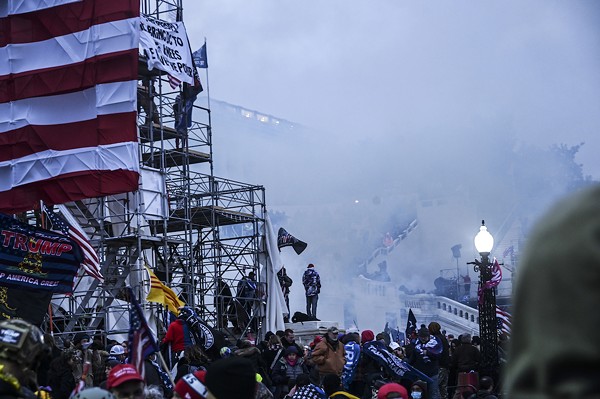 The following is a column of opinion and analysis.

One of the saving graces of America’s greatness has been its 220-year legacy of peaceful, election-based transfers of power — ever since a liberty-touting slaveowner named Thomas Jefferson took the reins in a similarly contentious race.

Last Wednesday, we tasted the political volatility with which so much of the rest of the world remains tragically familiar: one where the people must wait with bated breath after votes are tallied to find out whether the winner actually wins.

Multiple dice rolls had to come up 7 to avert a protracted constitutional crisis. Senate aides had to rescue the mahogany boxes containing the Electoral College votes, Vice President Mike Pence had to refuse to act like a robotic henchling, the storming of the Capitol had to backfire and force some Republican instigators to subsequently withdrew their objections to certification.

One can’t help but wonder, had the Democratic Party brass and the pundit class not frightened rank-and-file primary-goers into putting their progressive aspirations on hold, would the same deference have been paid to self-avowed socialist Bernie Sanders?

Did Joe Biden’s past opposition to desegregative busing, his “tough on crime” and Social Security-cutting triangulations, his time served as veep under the Deporter-in-Chief and Drone President, his billionaire campaign donors and looming cabinet of neoliberal shills — in sum, his generic status as the Establishment’s establishment politician — add up, in the recesses of enough of his right-wing opponents’ subconsciouses, to a comfortably corrupt return to normalcy?

How many more self-described patriots and prominent co-conspirators would have amassed in Washington at the President’s incitement had a more ostensible Red Scare been on the verge of occupying the White House?

Like the child monster in The Twilight Zone with godlike powers of wish fulfillment, Donald Trump at long last seemed to display, if not shame or horror, at least some realization that his words brought us to a precipice. Such a narrow escape, however, can’t offer much solace for anyone with a faith in democracy left to shake. These events have damaged the naïve assumption that underneath all our vitriol, bad faith and bombast, given a crisis, we’ll come together around a common purpose. The accelerating pandemic that continues to ravage our families has invalidated any bromides.

“The scenes of chaos at the Capitol do not reflect the true America, do not represent who we are,” Biden said.

Don’t they though? Perhaps the rioters who besieged federal property over the past year under the diametrically antagonistic banners of antifa and of MAGA understand this nation far better than middle-of-the-road liberals and conservatives who had the gall to act surprised by this week’s abortive putsch. Democratic institutions don’t stay aloft on autopilot, and court rulings and parliamentary procedures alone can’t suffice to save us from demagogues, white nationalists and assorted conspiracist dittoheads in the future.

Instead of sighs of relief, we on the Left ought to be green with envy: if the Right can mobilize over fake crises, why couldn’t we match their caliber of dedication in 2016 over a real one? Why weren’t Trump’s pledges to bring back torture “worse than water boarding,” to “go after” family members of suspected terrorists, to deport en masse 11 million undocumented residents — the logistics of which would surpass the Tear of Tears and Japanese internment in atrocity — sufficient cause then to deplatform his hate?

Luck allowed us to bank on his failure to keep those promises, but had the military been amenable, is there any doubt he would have deployed it to indefinitely delay his departure? Why didn’t we use any means necessary to prevent this man from ever taking office? In addition to the immigrant kids who died in their cages and untold innocent civilians scorched from afar, hundreds of thousands of Americans who perished amid a pandemic the White House all but ignored might be alive right now.

So, don’t be fooled by the soothing portrayals of manifested destiny that may follow on Inauguration Day: the anti-fascists were correct all along.

Kevin Sanchez is a lifelong socialist who sometimes writes columns for the Current.