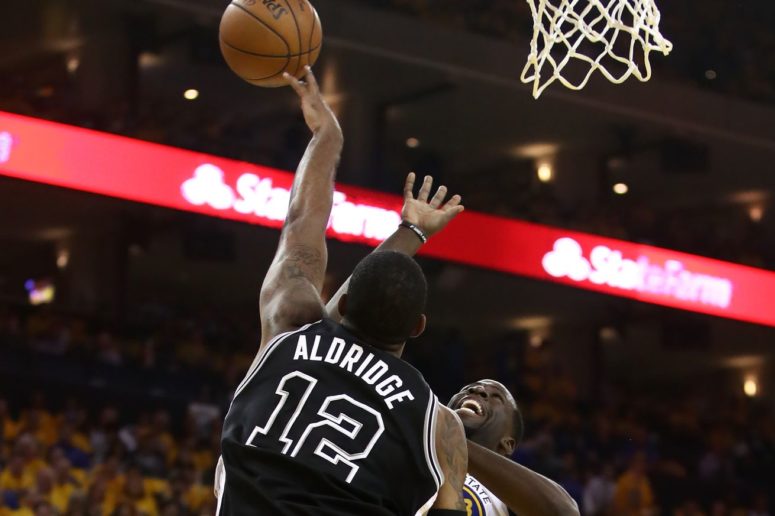 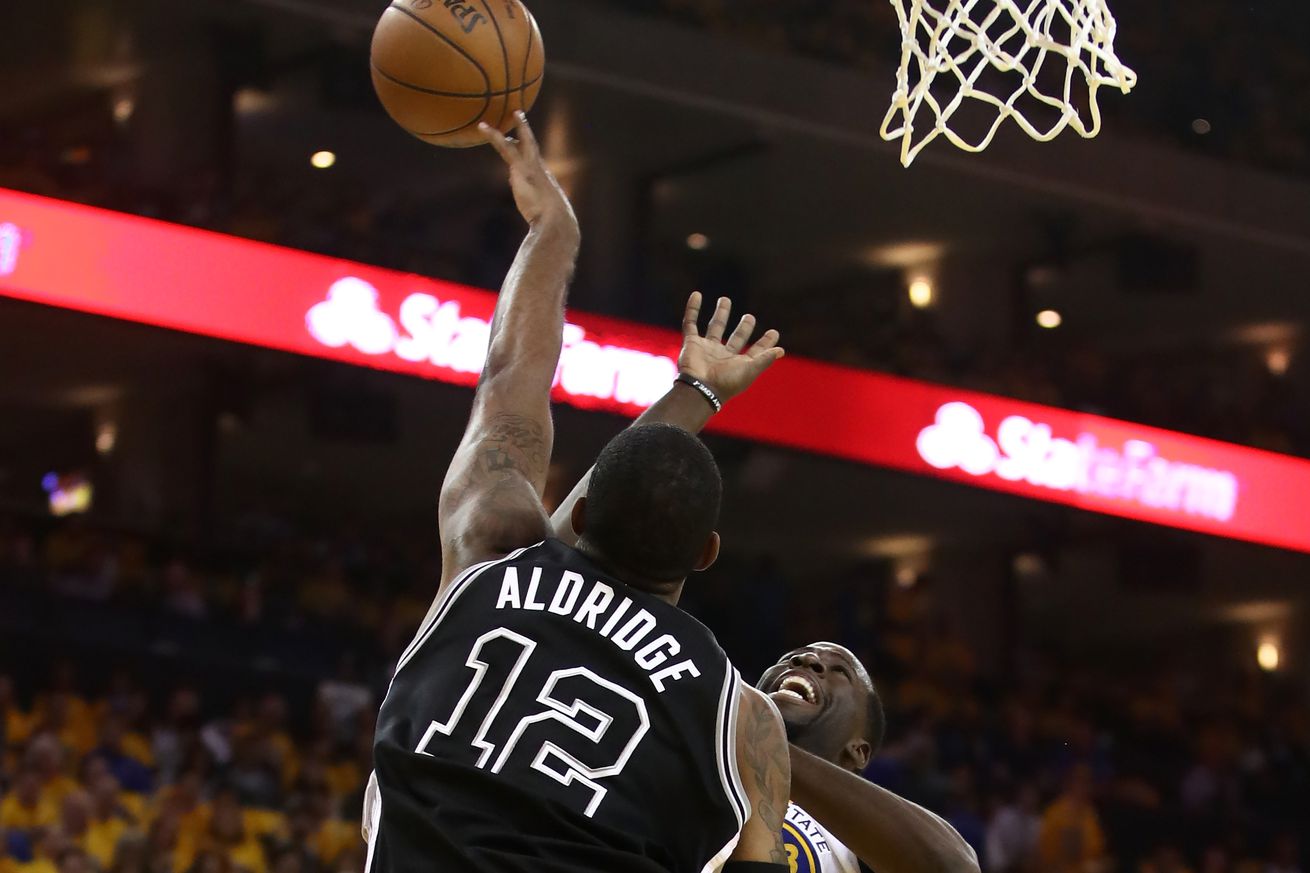 In addition to the excellent season he’s having on offense, Aldridge has taken a massive step with his contributions on defense.

LaMarcus Aldridge is in the middle of an unexpected bounce back season. He’s having a career year as a scorer, averaging almost 23 points a game on the highest True Shooting percentage he has ever posted. He’s done it with no clear-cut second option on a slow, throwback team. He’s made tough shot after tough shot to prop up a Spurs’ offense that has no business being on the top half of the league after missing Tony Parker and Kawhi Leonard for the better part of two months.

Aldridge’ work on offense should get him his sixth All-Star nod. But the truly noteworthy development in his game is his commitment to doing what the team needs of him on defense.

We’ve seen this kind of scoring from Aldridge before. Throughout the Brandon Roy and Damian Lillard eras of Trail Blazers basketball, he provided consistent offense to a team that needed it. He’s always been a mid-range assassin with a great post game. The fact that he’s been able to recapture that dominance on a different squad and as a 32-year-old is commendable. The willingness to do the dirty work on the other end to this degree goes beyond that. It’s actually unprecedented in his career and a sign that he has actually grown as a player over the past few seasons.

One of the biggest concerns when Aldridge first arrived in San Antonio was his reluctance to play center and accept a role as defensive anchor. In Portland, he had successfully avoided battling with bigger players inside and rotating tirelessly as a help defender. He was solid on that end — sturdy as a post defender and active on secondary rotations — yet he refused to take on the responsibility of being the team’s last line of defense. The same happened in San Antonio, where he first had Tim Duncan and then Dewayne Dedmon handle that task for long stretches.

That’s changed this year. Aldridge has accepted the role of sole big man. He’s playing center more, spending over half of his minutes at the position, according to Basketball-Reference. His willingness to do that for quarters on end has been instrumental in creating rotations that work despite an unbalanced roster lacking in size. Gregg Popovich has been able to split Aldridge and Gasol up so as to always have a two-way center on the court. In this new reality, Lamarcus is not just nominally playing the position but has also embraced the responsibilities that the role involves.

He’s been solid, too. Aldridge’s no Rudy Gobert, but opponents are shooting eight percentage points worse within six feet when he’s the closest defender. He’s also on the 72th percentile on post defense. He’ll always have trouble staying with guards on switches, but the Spurs seem confident exploring smaller units with him as the only big anyway. In fact, one of their best defensive lineups features Aldridge at center and Rudy Gay at power forward. Others don’t fare as well, but getting two-time Defensive Player of the Year Kawhi Leonard back could change that.

There will be skeptics that will rightly point out that, by the numbers, there’s nothing particularly impressive about Aldridge’s season on defense or on the boards so far. Most composite stats like ESPN’s Real Plus Minus or Basketball-Reference’s Defensive Win Shares suggest he’s actually been worse than in earlier seasons. That might be true, but in the past Aldridge had an easier job. This year he’s been asked to fill a much more important role more often than ever before and is doing it well enough for the Spurs to have the third best defense in the league despite Leonard’s absense. That has to count for something.

Ever since the Spurs acquired Aldridge, whether he would actually buy into the Spurs’ Way — and the sacrifices that come with it — has been in the back on every fan’s mind. Even the organization was worried, if the multiple trade rumors and the reported meeting between LA and Pop in the offseason are to be believed. His performance this season should alleviate those concerns.

Aldridge is playing like an All-Star again, putting up gaudy stats. That’s a relief, after his extension. An even bigger reason for optimism going forward, however, is that he’s not only willing to do what’s expected of him, but also what’s needed.

Less of this, please

Manu Ginobili is 40 years old. It was hard to imagine him remaining in the league at that age, considering his style of play. Yet he’s still here, helping the Spurs win games.

Pop has a lot to do with Manu’s longevity. He’s always monitored his minutes. Since the 2011/12 season, Ginobili has averaged under 25 minutes of playing time. In the past two years, Pop has kept his playing time under 20 minutes. That has allowed him to mostly avoid serious injuries and to remain fresh for the playoffs. This year, however, Manu’s minutes are back past the 20-minute threshold. That probably shouldn’t be the case.

Now, Manu is averaging 21.3 minutes a game. There’s only been a small increase in playing time, and it’s been driven by necessity. Without Tony Parker and Kawhi Leonard, the Spurs desperately needed an experienced ball handler. He’s filled that role well, despite struggling with his outside shot. He’s also hard rest games, which will likely limit the wear and tear those extra minutes might be doing to his body. This is not a huge issue.

He has averaged 25 minutes a game over the past five games, though. Parker’s been back for all of those and Leonard for one, and Pop is still relying on Manu a little too much.

Hopefully the rotations will normalize soon and Manu will go back to playing a couple of minutes less. It will be sad to not see him on the court as much, but it would probably be for the best.

Pop getting tricky with the ATOs

Pop is a master at After TimeOut plays. Next game, please make it a point to look at what the Spurs run after any break. It will typically be a beautifully choreographed, perfectly executed play that results in a good look.

This one from the win over the Celtics (who have their own ATO master in Brad Stevens) is just one pretty example.

There’s a lot going on. Davis Bertans first screen for Bryn Forbes, who then cuts to the rim. Bertans and Tony Parker move into a side pick and pop. As that is happening, Forbes starts to cut along the baseline and into what appear to be staggered screens from Danny Green and LaMarcus Aldridge that should free him for a wing three-point attempt.

Ah, but it was all a ruse. The play is actually for Danny Green, who was acting as if he was screening for Forbes. As the weak side defenders split their attention between the strong side pick and roll and the baseline cut, Green pushes his defender and uses an Aldridge screen to get the open look.

The Celtics defended it well, but it didn’t matter. The Spurs got a clean look for their best shooter, because Pop has a seemingly unlimited supply of clever ATO plays at his disposal.