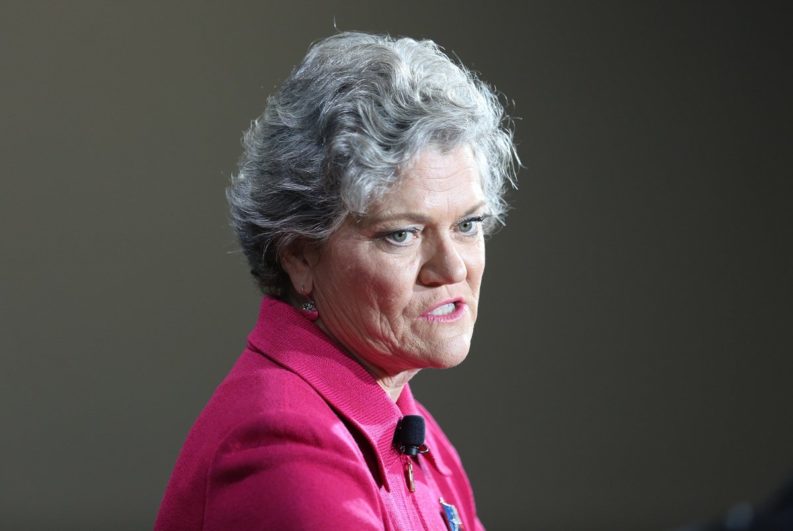 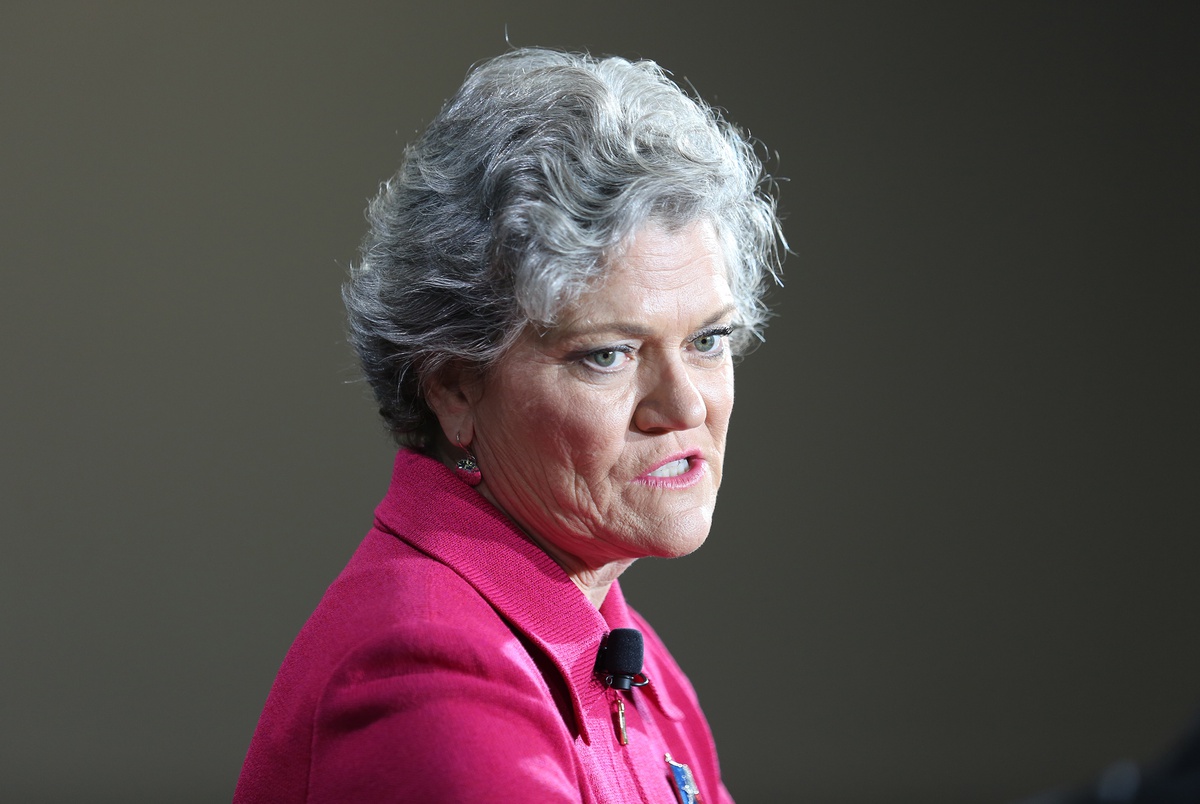 In Kim Olson’s still relatively young political career, her opponents have mostly steered clear of making a major issue out of the contracting scandal that led to her retirement from the Air Force in 2005.

Texas’ swashbuckling agriculture commissioner, Sid Miller, barely brought it up when she ran a surprisingly close race against him in 2018.

This year, she advanced in the first round of a crowded, mostly cordial Democratic U.S. House primary that saw little airing of the scandal. Her runoff opponent, Candace Valenzuela, hasn’t brought it up yet.

However, as she approaches the July runoff, Olson is poised to potentially confront the issue in a way that she has not had to before. Some Valenzuela supporters are starting to go public with concerns about her military career — and whether it would be too much of a general-election liability in a district that national Democrats are hoping to flip.

All the while, national Republicans have kept up a drumbeat suggesting that hounding her as a “war profiteer” would be central to their November playbook in the district. She rejects that term, calling it plainly inaccurate, but acknowledges the attacks are not going away anytime soon — and argues that she is well-prepared to fend them off.

Olson’s case came to light in a 2006 Los Angeles Times story, and she discusses it at length in a memoir she published later that year, “Iraq and Back: Inside the War to Win the Peace.” During her 2018 bid for agriculture commissioner, it came up mainly in the form of an Austin American-Statesman story.

The issue dates back to Olson’s time in Iraq in the early 2000s, when she served as the No. 2 to Gen. Jay Garner as he led the American rebuilding effort there. Instead of providing Garner’s team with military protection, the Department of Defense hired a group of South African bodyguards that Garner and Olson later said they came to greatly appreciate. When Garner was replaced several months later, he asked Olson to help the South Africans find continued work with the military using her expertise in the U.S. contracting process.

Along the way, Olson established a U.S. outpost of the South Africans’ security firm, Meteoric, and allegedly made herself the director. Within months, the Pentagon caught wind of the arrangement and conducted an investigation that accused her of improperly helping Meteoric win lucrative government contracts.

Olson denied the allegations and said she never personally profited from the Meteoric contracts. She eventually received a nonjudicial punishment known as an Article 15. She agreed to plead guilty to lesser charges, including creating the appearance of a conflict of interest, and received a formal reprimand and $3,500 fine. She was permitted to retire with an honorable discharge and no reduction in rank.

Garner defended Olson at the time and has continued to in subsequent years. In an interview with The Texas Tribune, Garner called the situation a “miscarriage of justice,” arguing that if anyone should have gotten in trouble, it was him — because “what got her in trouble is what I told her to do.” Olson, he said, was “one of the finest officers I ever served with.”

As the top fundraiser in the primary, Olson said she has demonstrated she has the capacity to battle whatever attacks come her way in the general election. Plus, she argued the experience shows she has the same type of leadership qualities that are needed for this moment in U.S. history, as the country battles the coronavirus pandemic and people like Capt. Brett Crozier are hailed for putting their careers on the line to do what’s right.

“You want someone that will step out, do what needs to be done, and if it doesn’t bode well from the bureaucratic point of view, then it doesn’t bode well, but at the end of the day, if you save lives, if you keep people from being sick, if you can do something to mitigate the economic and the damage to all of America — and by extension, the world — isn’t that the kind of leader we need right now in politics?” she said.

Democrats, both those who have taken sides in the runoff and those who have not, are keeping an eye on how Olson navigates the re-emergence of the issue.

“There’s no question that the problem she had … is a bump in the road politically and she’s got to get over that without losing a wheel,” said Matt Angle, a Democratic strategist who runs the Lone Star Project, which has not endorsed in the race. “Nobody should think that it’s just a non-issue.”

Angle and other Democrats nonetheless credit Olson with not shying away from the issue, including in her well-received campaign launch video, which features her walking down a runway while recapping her barrier-breaking life story as one of the first female pilots in the Air Force. She said the “warrior in me did what I had to do” to protect Americans in Iraq, and while she was reprimanded and took responsibility for her actions, “it’s a decision I would make again.”

Olson and Valenzuela are competing for their party’s nomination to replace retiring U.S. Rep. Kenny Marchant, R-Coppell. The seat is among seven this cycle in Texas that the Democratic Congressional Campaign Committee is aiming to flip. Beth Van Duyne, the former U.S. housing official and Irving mayor, has already secured the Republican nomination for the seat.

That could be the difference between this cycle and Olson’s 2018 race against Miller. Two years ago, she was the clear underdog. Now Olson is running in a national battleground that could easily draw over $1 million in attack ad spending once the general election is set.

“Our polling data always showed that Commissioner Miller enjoyed a comfortable lead in the race and therefore we saw no need to spend campaign dollars on paid media on this issue,” Miller’s political consultant, Todd Smith, wrote in an email. “We were hopeful that the mainstream media would find her military record as disturbing as we did and would do their jobs in bringing this matter to light.”

Olson finished first in the seven-way primary for the seat in early March, getting 41% of the vote to 30% for Valenzuela. She entered the race last year with a relatively high profile after her 5-point loss to Miller. Valenzuela, meanwhile, had a slower start but started gaining momentum late last year, earning the endorsement of EMILY’s List, the influential national group that backs Democratic women who support abortion rights, and picking up the pace on her fundraising.

Valenzuela’s campaign had no comment for this story. But one of her recent endorsers in the runoff, a progressive veterans group called Common Defense, is sounding the alarm about Olson, saying she “used her position of power in the military to steer $3 million to South African bodyguards, then went into business with them.”

“As veterans, we support elected officials who will fight for us, not themselves,” Common Defense’s political director, Alexander McCoy, said in a statement. “We won’t give someone a rubber stamp just because they’re a fellow veteran, we vote for the candidate who represents the same values of integrity and character we hold dear. The person in this race who represents those values is Candace Valenzuela.”

McCoy was harsher in an interview, saying Olson “displayed incredibly poor judgment” in Iraq as well as a “selfishness and lack of integrity.”

Olson has the backing of a few more prominent veterans groups, including VoteVets, which recently made a splash in Texas by spending over $3 million to help secure MJ Hegar’s place in the Democratic primary runoff for U.S. Senate. In an interview, VoteVets chair Jon Soltz said Olson is the group’s top priority this year in House races, and while it would prefer to spend against Republicans at this point in the cycle, it is prepared to defend her amid any intraparty conflict.

“An attack on Kim Olson’s service … would be coming from people that were not there in that situation and don’t frankly have the experience to evaluate” the choices she faced, said Soltz, an Iraq War veteran himself. “An attack on her service is an attack on VoteVets, and we will respond accordingly.”

Valenzuela also has deep-pocketed national groups in her corner, including EMILY’s List, which spent over $200,000 boosting her in the primary. She has also been endorsed by the political arms of the three top caucuses for people of color in Congress — known as the Tri-Caucus — which includes the Congressional Hispanic Caucus, the Congressional Black Caucus, and the Asian American and Pacific Islander Congressional Caucus.

While the intraparty criticism of Olson may be limited so far, Republicans have hammered the line of attack since Olson’s campaign began. Hours after she launched her campaign last year, the National Republican Congressional Committee welcomed her to the race with a statement invoking the contracting controversy.

“If Democrats are foolish enough to nominate disgraced war profiteer Kim Olson, she’ll be rejected in November as Texans learn more about the criminal enterprise she ran at the expense of our troops in Iraq,” NRCC spokesman Bob Salera said in a statement for this story.

Olson rejects the accusation of war profiteering, which Common Defense has also made, saying it is simply false.

“I’m unequivocal about this and all documents will prove this: There was absolutely no profit made at all,” she said. “Full stop.”