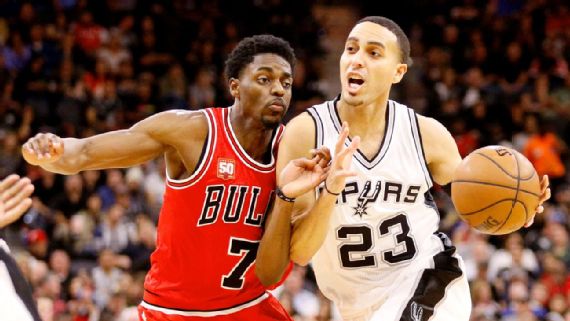 Martin didn’t slip, fall or chunk up an air ball. Martin just did what everyone on San Antonio’s bench expected.

“It’s just unbelievable,” Parker said, still laughing. “The first time he got the ball, we were laughing. Timmy [Duncan] was like, ‘Oh my God. Unbelievable.’ He’s got a gift for that, man … drawing fouls. I’m just happy he’s on our team now.”

Martin made his Spurs debut with 1:22 remaining in the first quarter. By the time the 11:21 mark of the second quarter hit, Martin was standing at the line, sinking a free throw after touching the ball for the first time, and drawing a foul on Chicago’s Justin Holiday……Read More

Source: Kevin Martin lives up to his reputation in his debut for the Spurs – San Antonio Spurs Blog- ESPN