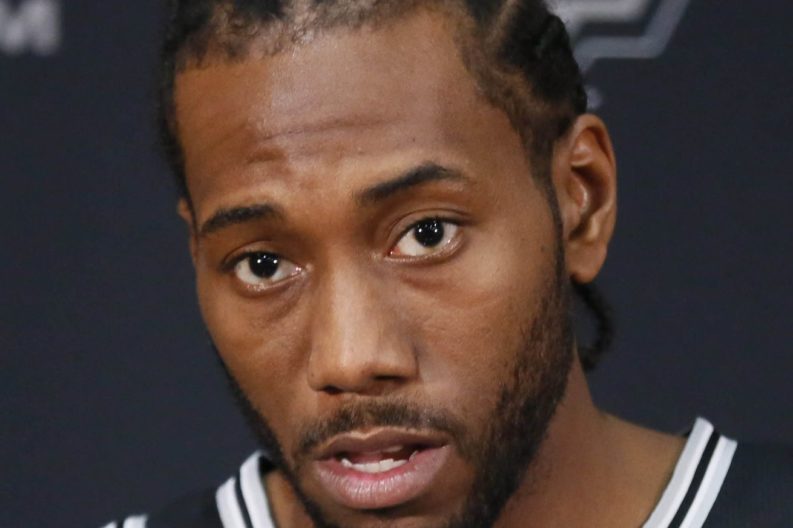 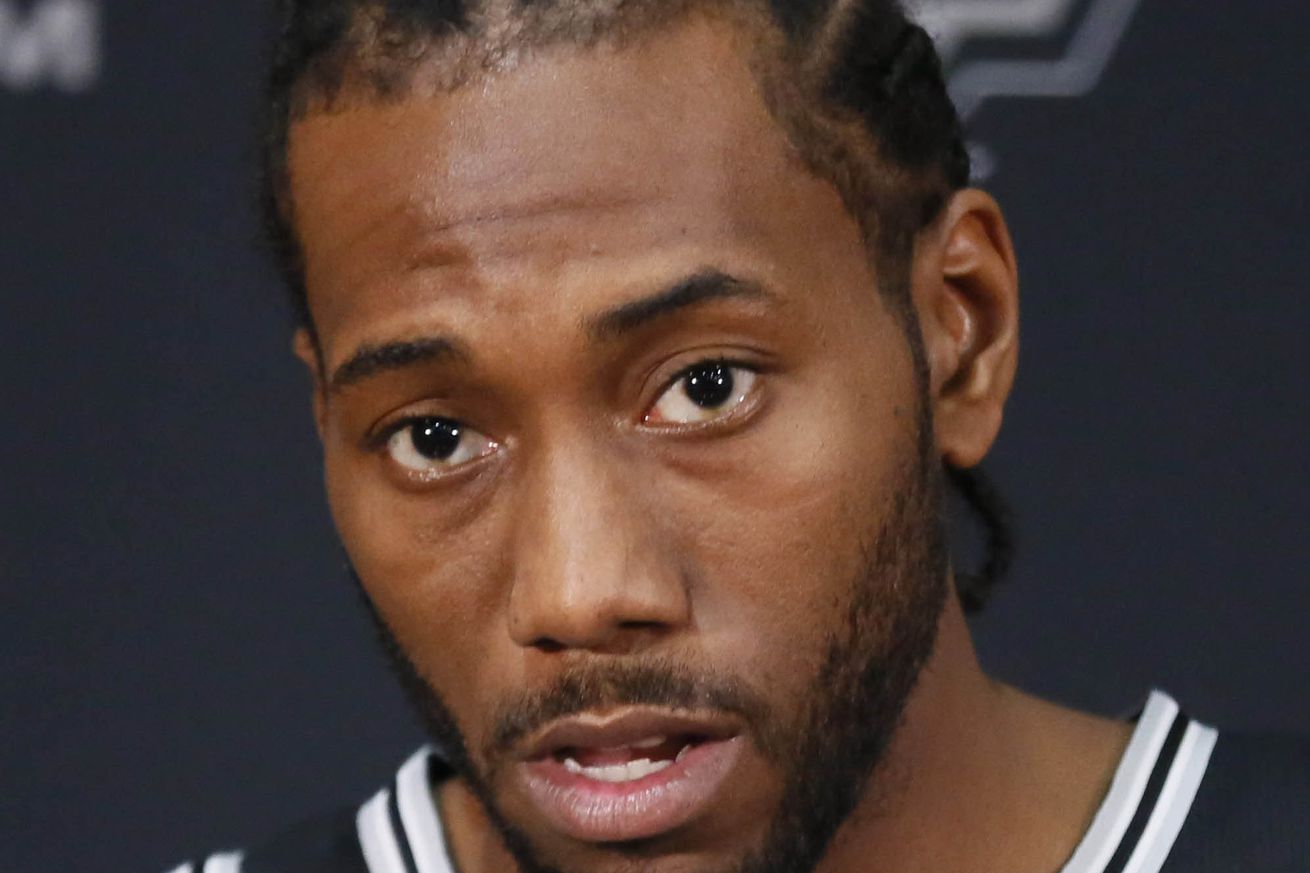 Yesterday I was writing a draft for a scenario in which things went south in the summit between Leonard and the Spurs.

After the news broke that Kawhi Leonard wants out of San Antonio, (and to preferably be sent to the Lakers) a ’what if things go south’ article isn’t needed. Things went sideways and south and apparently the relationship is beyond repair.

At this point, if all the reports are true and Kawhi is allowing his group to force a trade, if Kawhi’s group is able to maneuver to get what they want without allowing Kawhi to meet with Popovich, if we must come to terms with the fact that the last meaningful game Kawhi played was ended by the goonish foot of Zaza freaking Pachulia…

Then my gut response is: ‘Don’t let the door hit you on the way out, Kawhi.’

The Spurs don’t need my advice, but in the above scenario, I do hope the following occurs: Trade him to a team in the Eastern Conference for the best combination of draft picks and young players who fit the Spurs culture, and start rebuilding in earnest. Now.

I’d send Leonard as far from L.A. as possible. Sure he can opt out next year and go to there if that’s where he wants to be. Then again, maybe he stays out east. No need to strengthen a team in the same conference and no need to reward Leonard.

Don‘t let the door hit you on the way out:

Kawhi‘s contributions as a Spur are appreciated. I have no desire to go out and burn a Leonard jersey. At the same time, because of the way Leonard handled this situation, I will not and cannot remain a fan of ‘The Klaw.’

As a life-long San Antonian and Spurs fan since Day One of the A.B.A., I want players on the team who like our city and want to be a Spur. I’m a sentimental sap that way.

And, as a Spur fan, it would seem, from the past season, that most of his teammates and coaches had no idea what he was really thinking or planning. Uncle/Agent Dennis kept reassuring us that there was ‘nothing to see here, everything‘s well,’ and, Leonard himself contributed to the disinformation when he (now )infamously said, toward the end of the season, ‘yeah, sure,’ in response to the question ‘do you want to stay in San Antonio?’ A lot of people believed that statement and celebrated.

I didn’t believe it then. I didn’t celebrate because there were other things that spoke louder than that mumbled statement.

First, what else was he supposed to say while here in S.A. with mics thrust in his face and asked that question? He was prepared to say what he needed to say to keep the media off his back.

Second, his silence during all the rumors concerning his desire to be traded or to ‘go back home,’ spoke louder to me than any statement about ‘wanting to stay a Spur.‘ Leonard never bothered to say anything to refute the rumors, alleviate concerns of fans (that’s what he thought of you, fans), and from what we could tell, his own teammates didn’t know what he was thinking-hence a players only meeting.

Third, his actions, namely, not being around and supporting his team as it pushed to make the playoffs spoke volumes. He chose to stay far from his team. While his team gutted it out, Leonard was basically in hiding.

Fourth, Pop and some of Kawhi’s own teammates were sending messages that countered the narrative coming from Leonard’s camp: confusion, frustration and uncertainty emanated from Spurs Lane.

Fifth: Leonard rehabbed, kept his distance collected his checks and apparently had zero intention of returning to San Antonio.

To borrow from Lt. Aldo Raines: ‘That, I cannot abide.’

Sixth: Buford and Popovich have a long, consistent track record in terms of how they handle matters: always in house. They are not ones to air things out in the media. This season has been a media dumpster fire.

It would be highly uncharacteristic of this organization and their track record to suddenly be the ones starting these public fires. As such, the narratives coming out of Leonard’s camp painting him as a misunderstood victim seem disingenuous. If Pop and the Spurs had a history of burning players and breaking trust, that would be a different story. The reality is, the exact opposite is true.

In any situation where there are relational problems, it is never (or rarely) the case that one side is 100% to blame. No doubt, there are some things that Pop and Buford and some of Leonard‘s former teammates could have handled differently. Still, looking back on it all, it appears that Leonard and his group had this end game in mind all along.

Don’t let the door hit you on the way out.

Rebuild from a Position of Strength.

There is a possible domino effect that could unfold. The Spurs could surprise everyone and think short-term: trade Leonard for an established All-Star, try to go hard after another All-Star caliber player to build around Aldridge and be competitive for the next two-four years. It would also take a miracle to pull all of that off, and if so, it would in all likelihood be a short-term fix that still leads to the inevitable, actual, rebuilding phase in a few years.

The other possibility is that the Spurs start thinking now about accumulating young talent and draft picks with a Leonard trade. In this scenario, the Spurs would be thinking more in terms of loading up for the post-Popovich era.

If this happened, it would not be unreasonable for Aldridge, at this stage in his career, to want to play elsewhere. He came to San Antonio to compete for a title, not go through a rebuilding process. If the Spurs go young, Aldridge may ask to be traded to a team where he can have the opportunity to compete for a championship.

To borrow from Lt. Raines (again), if Aldridge asked to play elsewhere in light of the new realities in S.A., I would ‘oblige him,’ and do so graciously. His trade value will never be higher than it is right now.

If Leonard and Aldridge were to be traded, all bets would be off on anyone else under contract. The Spurs could, with this roster, stockpile young players and draft picks much as Danny Ainge did with the Celtics.

That Celtics model worked out fairly well, and, is perhaps the best option for success if one is not able to build a ‘super team’ via free agency.

If the Spurs went this route, Manu may well say ‘uno mas,’ but not to play as a Spur. Manu might well ask for one more chance to compete for a title. As much as it would pain me to see him in another uniform, I would want him to have that opportunity.

A lot more could change in a few months, Spur fans.

In all of this is another unknown: Gregg Popovich.

It is assumed that Pop will coach for at least one more season. That assumption may have been based on a best case scenario: Leonard returns and the Spurs make moves to get back in the championship hunt.

But now? Pop has been through a tough few years: his favorite player retired. He had the drama with Aldridge last off season and this entire season was one long soap opera featuring Kawhi and that ended badly. Above all of that, was the tragic loss of his wife, Erin.

Maybe Popovich looks at all of this and says ‘I don’t need this anymore. I’m going to spend time with kids and grand kids and take a break before the Olympics.’

Or, maybe he looks at this and sees an exciting, new challenge filled with opportunities to teach young players to play the game the right way. Maybe this is the kind of challenge that gets his juices flowing.

Whatever Pop needs to do at this point in his career, I fully support. The man has earned that right. He certainly doesn’t deserve the Jerry Sloan treatment.

It’s time to turn the page, San Antonio. We are officially entering a new era. No one knows how long it will last or how long it will be before the Spurs even sniff a championship again. We don‘t even know who will be in the next round of H.E.B. commercials, but here we are and here we go.

This could actually be an exciting time.