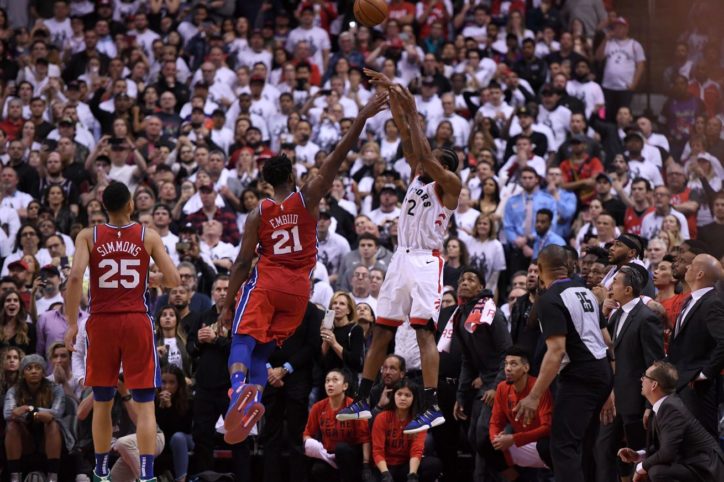 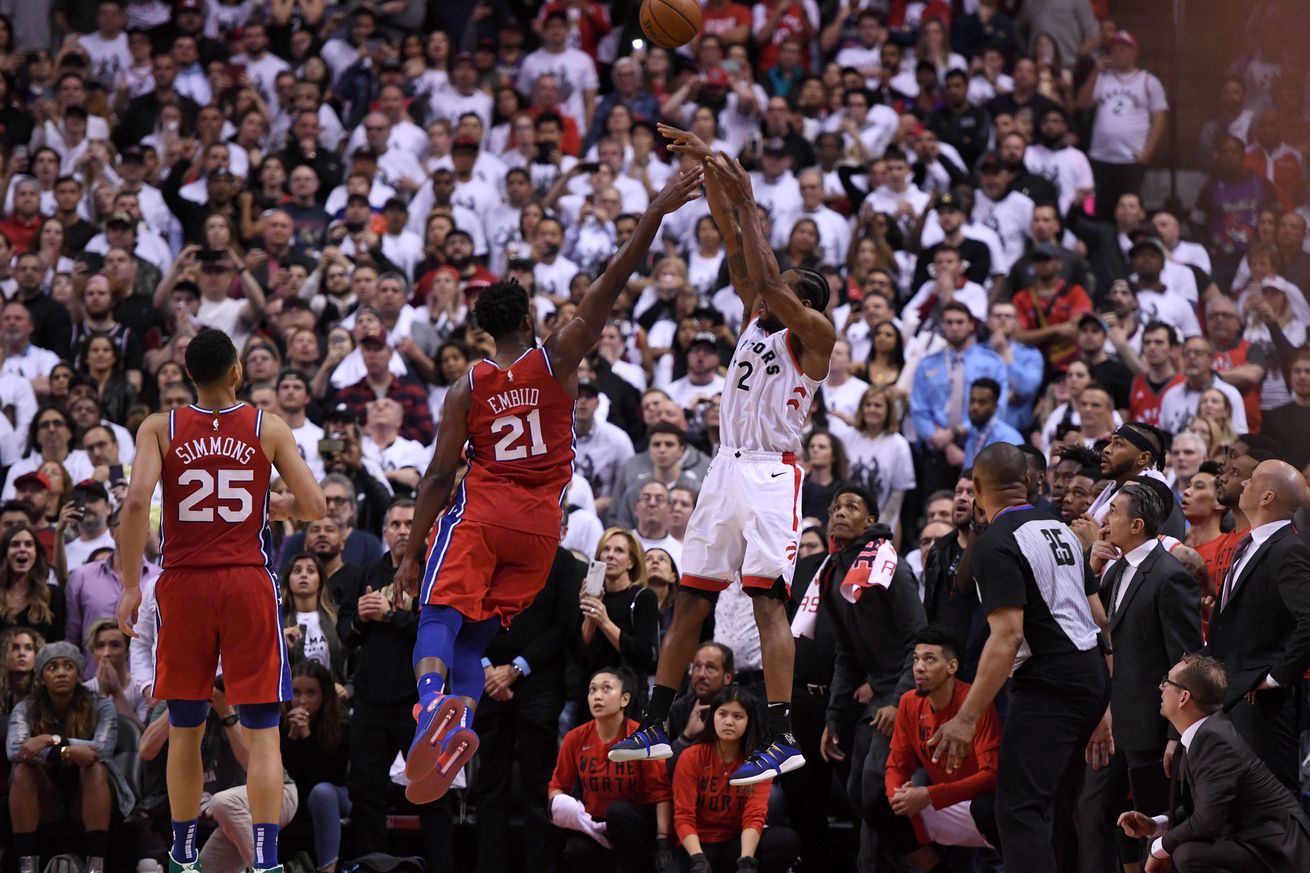 Kawhi Leonard’s fading, contested, game-winning shot from the right corner hung on the rim for over 2 seconds, bouncing 4 times before falling through the net. Leonard won the series with that improbable shot, sending the Raptors to the Conference Finals for the first time since 2016 and the 76ers home at the end of the same round they lost in last season.

Leonard’s walk-off will serve as validation, for some, that the Raptors made the right move by pushing their chips into the middle for a run this season, hoping both for a title and to convince Leonard to stay in Toronto. How much farther they go, whether Leonard stays, and if not, how low the bottom gets as the team attempts to recover will certainly have more to do with the long-term perception of the deal, but for now, the Raptors are on the right track.

The 76ers, on the other hand, find themselves headed home in mid-May again. They have plenty of reasons for optimism, including what might be the most top-end talent of any team outside of Golden State, and their best course of action at this point is to run it back next year. But they still have some hard questions to consider, with Joel Embiid’s health and Ben Simmons’ role chief among them.

And that’s unfortunate for several reasons, not least of which that the 76ers drug their fans through years of intentionally bad basketball to get to this point. After winning just 85 games over a 4 year span from 2013-2017 and drafting 5 different players in the lottery, including two #1 picks, the 76ers are on the precipice of contending for a championship.

But who knows whether they’ll ever actually take that final step. If they do, the losing will have all been worth it and “The Process” will be remembered as a success. If they don’t though, at what point does all that losing outweigh what came after?

If the 76ers never make it to the Finals, was it worth it? That’s a real possibility with Giannis Antetokounmpo emerging as potentially the best player in the league.

What if they don’t even make it to the Conference Finals? What if this is the high water mark for the team? That doesn’t seem likely, but nobody knows what’s going to happen during the offseason. Last year at this time, everyone was sure the Trailblazers were done, and we were all wrong.

It would be easy, in that case, to re-litigate every decision the team’s front office has made, to second guess the draft picks and pick apart the trades, but it’s hard to find too much fault in the result. The 76ers have 4 star players, one of whom has the potential to be a top 5 player in the league.

Sure, in retrospect, they shouldn’t have drafted Markelle Fultz, but that was a defensible decision (if not necessarily a good one) at the time. Also, to be fair, how much better would they really be right now if they had drafted Jayson Tatum or Lonzo Ball instead?

And that really is the crux of the issue. The draft may well be the best way to acquire star talent, but it’s also still essentially a crap shoot. Since Tim Duncan was drafted first overall in 1997, there have been 21 players taken with the #1 pick, and they’ve combined for 5 championships. LeBron James has won 3, Andrew Bogut 1, and Kyrie Irving 1. That’s it.

For an even more sobering perspective, take a look at the top 3 picks from each draft. For every Anthony Davis, there’s a Hasheem Thabeet and a Greg Oden. For every James Harden, a Michael Kidd-Gilchrist and an Adam Morrison.

Intentionally pinning your franchise’s hopes to the draft requires the kind of head first charge into the depths of despair that the 76ers embraced. It just doesn’t work out nearly often enough to only take 1 shot at drafting a franchise player.

But there’s a problem there, too. The only team to draft in the top 3 more than once over the last 20 years that’s gone on to win a title is the Cavaliers, who used an astounding four #1 picks to take LeBron, Kyrie Irving, Andrew Wiggins, and Anthony Bennett. With four rolls of the dice, the Cavs selected the best player of his generation, an All-Star, a project that may never be completed, and a project that never really got started.

Maybe the 76ers will be the 2nd team to do it, but if so, they’ll probably be the last. The NBA has already taken action to prevent a repeat performance, adjusting draft odds to deter anyone else from emulating their all-in approach.

The idea persists, though. As a team-building mechanism, bottoming out to hasten a rebuild seems to be as prevalent as ever. But it’s not the only way. And the guy who sent the 76ers home is a great example of that, as is the likely-MVP he’ll face in the Eastern Conference Finals.

Both Leonard and Giannis were selected 15th in their respective drafts. Both were taken by playoff teams that had just lost in the 1st round. And now one or the other will be the best player on a Finals team: something that can’t be said about any player taken in the top 3 since Kevin Durant in 2007. And while Giannis comes into this game with the team that drafted him, Leonard is, at least technically, on his 3rd franchise.

They serve as actual proof that teams don’t need to tank to acquire top end talent. There are still diamonds in the rough to be found later in the draft and trades that, if you can stomach the risk, can land superstars.

Which leads to the other side of the trade that sent Leonard north last summer. The Spurs chose to take a package centered on DeMar DeRozan rather than pursuing prospects and draft picks. While they did get their starting center and a late first round pick in the deal, they also gave up Danny Green. They chose, essentially, to continue competing for a playoff spot and developing from within rather than resetting and pursuing a rebuild through the lottery like the 76ers.

How you view that decision likely has a lot to do with how you define success and what you’re willing to give up to get there. Before you criticize the choice though, consider the 76ers. Consider what it cost to get where they are and all the uncertainty that remains. Also consider the Raptors, who are riding out their big bet right now. Think about where they might be in a year or two, about the reckoning that might come if Leonard leaves.

Make no mistake, both teams chose the roads they’re on, and both have been largely successful. Leonard’s incredible shot didn’t validate one approach and invalidate the other. If any one of those 4 caroms had bounced a slightly different way it could have completely changed the story, but it wouldn’t have meant anything about the underlying decision making and team building that left them tied with mere seconds to go in a game 7.

Regardless of whether or not Leonard leaves or the 76ers win a title with this group, both teams understood the risks and committed to their positions anyway. For better or worse, they’re right where they wanted to be. Those gambles could result in championships, but they may very well not.

The Spurs, meanwhile, chose a way forward with less risk, but also less upside. They will likely restart their 50 win streak next season and appear to be in good position to keep it going for the foreseeable future. If one or two of their youngsters take a leap — Dejounte Murray or Lonnie Walker IV, most likely — they could even find themselves in a conference finals again as early as next season, depending on what happens in the offseason. It may be hard to imagine them developing enough to become a real championship contender, but it’s possible.

That doesn’t mean the Spurs were right to take this path; winning in the NBA is far too complex for such simple distinctions. Still, whatever the optimal solution was, the Spurs aren’t relying on a roll of the dice or subject to the whims of a superstar with a newfound sense of agency. They’re back in control of their future, and that’s exactly where they want to be.