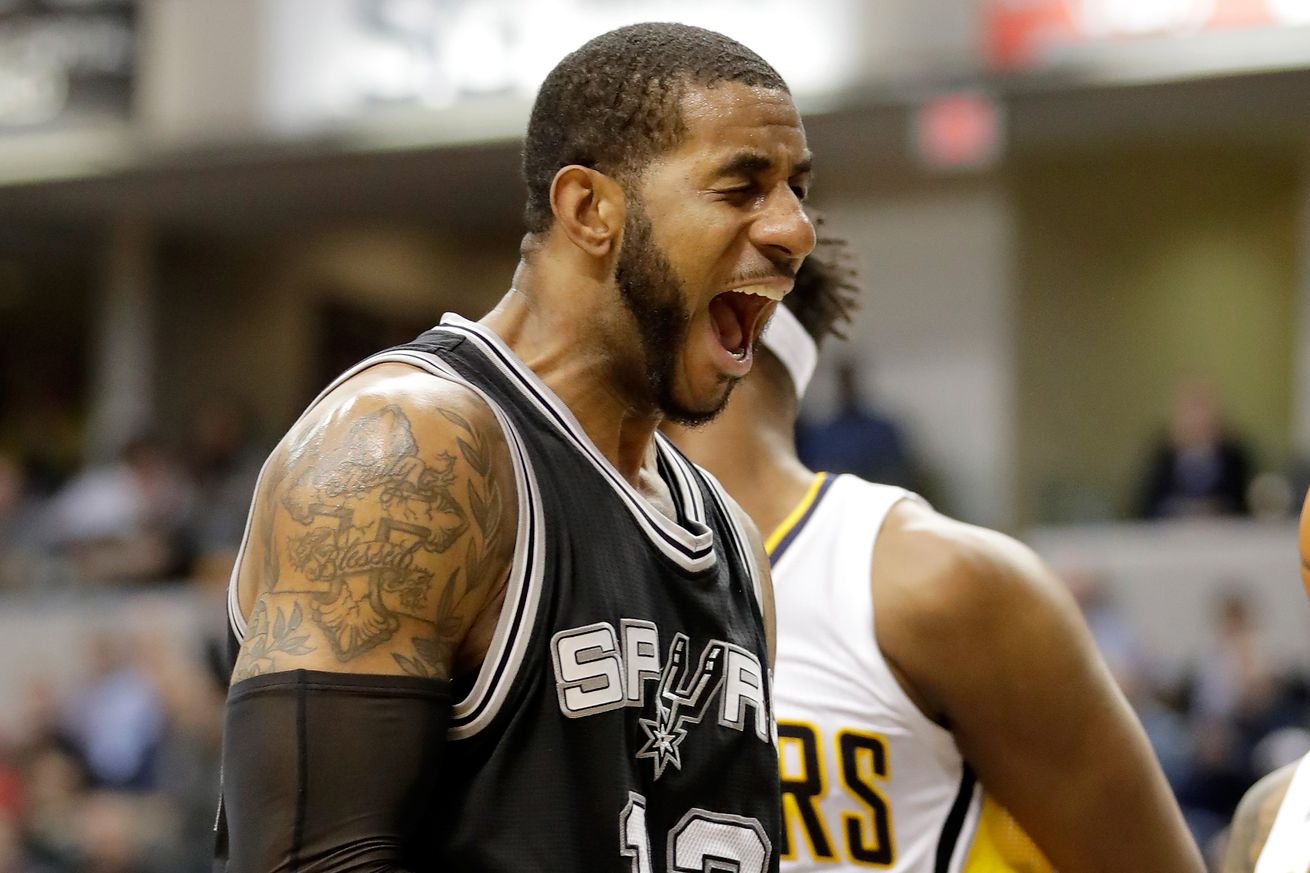 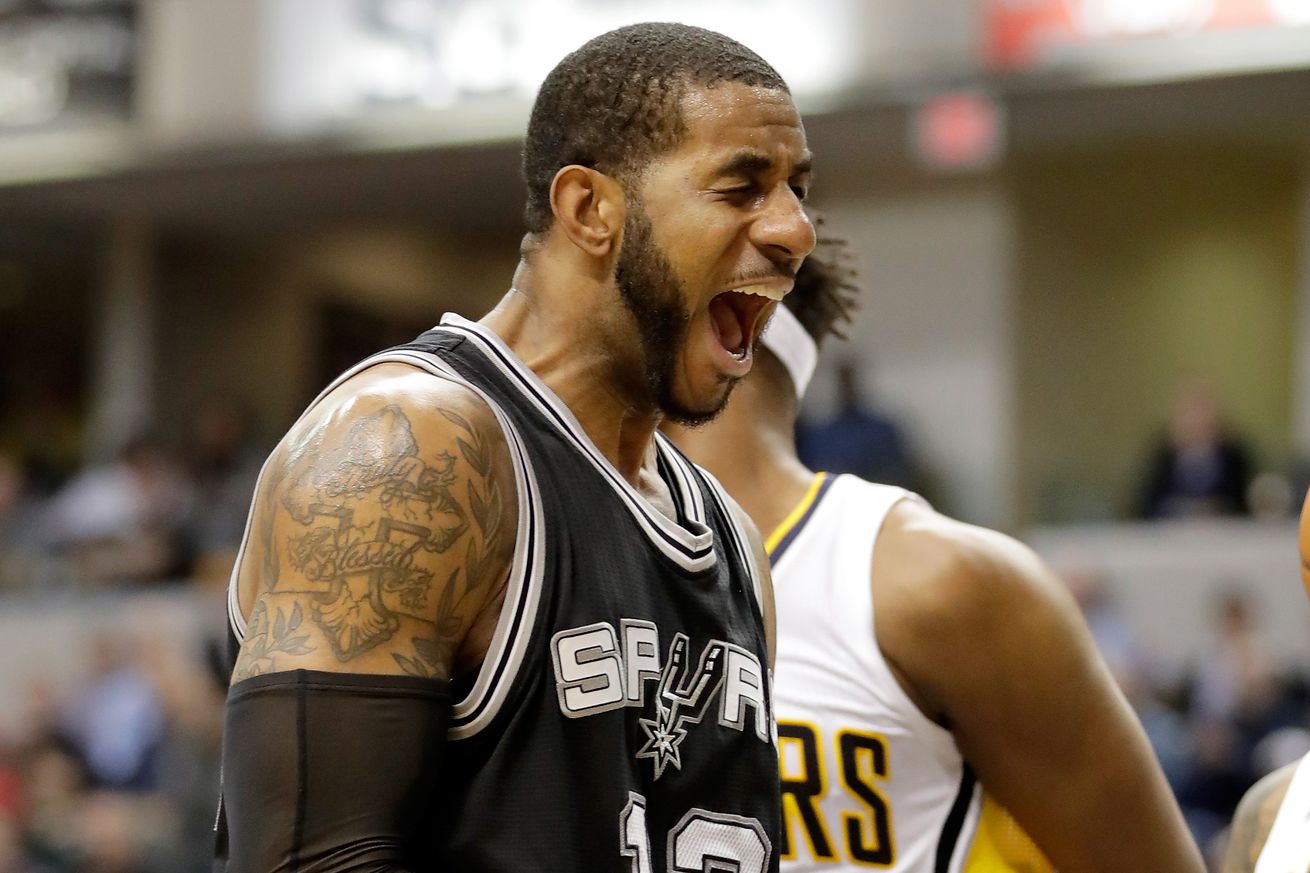 In this week’s episode of In The Bonus, the staff looks at the recent changes in their two best players’ performances.

1) Kawhi Leonard hasn’t been as dominant on offense the past few games. Is it A) a reason for concern B) opponents playing good defense mixed with a bit of a shooting slump C) a conscious effort to get his teammates going, or D) all of the above?

Michael Erler: I think D is the closest answer. I’ve definitely noticed a more concerted effort to be more of a playmaker, but opponents could be ramping up efforts to double him more and make it harder on him to score from his preferred spots. Really the biggest thing for me is I think some fatigue is setting in for him. The Spurs schedule has been pretty grueling, like every other NBA team this time of year, and he hasn’t been able to rest much and his workload has never been this daunting, with him having to take the offense on his shoulders, especially during that stretch where Parker was out. If you notice, a lot of Leonard’s threes are missing short, which to me indicates fatigue. The Spurs are in a tough position, because they only need one Warriors loss to be back in position to control their own destiny for the one seed. I think if it becomes clear in April that they’re not going to catch the Dubs, Pop will rest Kawhi for two or three games.

Jesus Gomez: None of the above, maybe? I just think that Leonard is figuring out when he has to push things and when it’s better to let others shine. It’s not necessarily that he’s consciously trying to get others going as much as he recognizes when they are having a good game and lets them get more touches. There’s also the fact that opponents are treating him like a superstar and trying to get the ball out of his hands now. So I think it’s a mixture of opponents trying to get anyone else to beat them and Leonard trusting that his teammates can carry the offense when they are feeling it.

Bruno Passos: I’m not really concerned. I’ll say that he’s looked a bit fatigued out there, but I think it’s a product of it being this time of year and teams throwing multiple defenders at him over the last three or four games. It wouldn’t surprise me for him to get a night or two off as we enter the season’s final stretch.

Taylor Young: I agree that Kawhi’s missed free throws and short jumpers seem to be a sign of fatigue. Though he found his shot stroke again against the Knicks, but I probably could find my jumper against the Knicks too. I think the answer is C, he seems to realize that for the Spurs to be at their best, they have to play a certain way. Unselfish superstars like Tim Duncan and LeBron James also seem to know what nights their teams need them to be a boss in order to win and I think Kawhi is becoming aware of that as well.

2) On the flip side, LaMarcus Aldridge has been a terror. What’s different since his return from a scary heart arrhythmia?

Michael Erler: That it’s coincided with Parker’s return and Leonard’s fatigue, probably. Aldridge has peaks and valleys every couple weeks and this is another hot spell. We’ll see if he can keep it up. I’d still like him to rebound more.

Jesus Gomez: He has Parker feeding him and he’s been more decisive. He’s attempted over 20 field goals in three of the last six games. Before that, he’d only taken 20 shots or more in six games all season. LaMarcus is letting them fly. I’d wish he’d mix it up inside more to get more free throws, but I guess for now I’ll take this aggressive version over the overly-deferential one we’ve seen at other points in the season.

Bruno Passos: He’s getting to shoot more, and he’s also getting more touches in the paint (two per game). The latter is pretty exciting, considering how effective Aldridge was scoring around the basket last season. If he brings that added aggressiveness into the playoffs, it’ll be huge, even if he doesn’t get the same volume of shots and Pop puts the ball back in Kawhi’s hands more.

Taylor Young: He isn’t overthinking anything. He’s just letting it rip. Maybe the scare gave him a fresh start and now he’s loose and free. Also, Tony Parker and Kawhi are making a concerted effort to get him the ball.

3) Rank these possible first round opponents (assuming the Spurs get the 2 seed) in order from scariest to least scary (and why?) Memphis, OKC or the Clippers.

Michael Erler: The Clippers will always be the scariest to me, I don’t care if they lose every game from now til the season ends. They still have Chris Paul and Blake Griffin and those guys are unholy terrors against the Spurs. I will never take any wins for granted against them, ever. After that OKC because Kanter and Adams present their own match-up issues with their ability to control the boards and make life tough for Aldridge and Gasol and Westbrook can get them a couple games almost by himself. Roberson also guards Leonard pretty well. The “easiest” is Memphis. Their defense is good, but I don’t think they have the firepower. Their best wing is 40.

Jesus Gomez: The Clippers are a mess right now, but the memory of that Game 7 loss is still fresh. They have the highest upside out of those three teams, too. So if they get it together, they could absolutely pull off the upset. The Thunder probably have no shot in a seven-game series, but their big front line and Westbrook could be a nuisance. The Grizzlies are the least scary, simply because they have zero talent at the wing.

Bruno Passos: Clippers, Thunder, Grizzlies. There’s a reason Kawhi Leonard’s lowest career scoring average is against the Clips: they know how to scheme against him. DeAndre Jordan provides rim deterrence and they have length on the wings to give him trouble. Beyond that, their offense still has elite potential when everything is clicking and their bench is littered with guys who can be playoff heroes, if just for one game. I think the Spurs will figure out how to play Russell Westbrook over a seven-game series, and I don’t think the Grizzlies can get hot from deep four games out of seven.

Taylor Young: Thunder are the most scary, because they have the best player. I am not scared of the Clippers I know the numbers and the history, but at some point it’s just about who is better. I think matchups in the NBA are given too much weight at times. The Clippers have just been a bad team recently and I can’t see them getting it together enough to beat the Spurs four times. Plus, the Spurs are historically great in revenge series. I think the Spurs would sweep the Grizzlies.

4) How important are the games coming up against the Cavaliers, Warriors and Thunder? What would you like to see from the Spurs in those games? Will Pop try anything out or do you think he’ll play them straight up with no bells and whistles?

Michael Erler: My controversial opinion is I’d like to see the Spurs win those games. There’s no way to fully play the Warriors game “straight up” because again they won’t have Durant. But no, I don’t think Pop is going to do anything too weird. I don’t even know what different thing he can try anymore. They’ve played against LeBron and Russ like a million times.

Jesus Gomez: It depends. If everyone is playing, I think those games are a good measuring stick. If anyone other than Durant sits, they are meaningless. As for Pop’s strategy, I expect him to play to win but I can’t see him shortening the rotation just yet.

Bruno Passos: Now that the one seed feels like a faded dream, I don’t think these games are all that important. Wins are great, but San Antonio has already proven it can beat all these teams. The improved play of LaMarcus Aldridge and Pau Gasol are encouraging enough as late-season revelations, and I’m happy for Pop to play the rest of his cards close to his vest until mid-April.

Taylor Young: Much more important for Spurs fans than it is the actual team. If the Spurs drop all three or go 1-2, there will be a lot of chatter about the Spurs being “fools gold.” The fans will be a nervous wreck going into the playoffs. Also, I think the next few games are extremely important for Kawhi’s outside chance at the MVP trophy.

5) Pretending Kawhi returned to Westworld and the Spurs could pick someone to replace him besides LeBron James, which healthy MVP candidate would give the current Spurs the best chance at a title? Russell Westbrook, James Harden or Isaiah Thomas. The Warriors and Cavaliers are intact in this bizzaro world.

Michael Erler: If the Spurs don’t have Kawhi and can’t get LeBron I don’t think they’d be any closer to a title with one of the other guys. None of them play defense. How does that make them better, overall? I’ll go off the board and take Chris Paul, the best two-way superstar available. Second place would be Giannis Antetokounmpo, third would be KD. (And I’d take Anthony Davis or Karl Anthony-Towns over all three of them if not for the fact that the Spurs already have two high-priced bigs and no SF in this scenario.)

Jesus Gomez: Aww, how nice of us to call Isaiah Thomas an MVP candidate. I think out of those three, I’d take Harden. Patty Mills would play the role of Patrick Beverley, Dewayne Dedmon would be an older Clint Capela while Danny Green does his best Trevor Ariza impression. The main concern is that Harden wasn’t happy sharing the ball with a post-oriented big man, so he could clash with Aldridge. Even so, as long as this isn’t a swap scenario in which Leonard joins the Rockets, I think the Spurs would have a shot of reaching the West finals.

Bruno Passos: Out of those options I’d take Harden. He may be the least bad defender out of that group, and I’d like to see how his strengths would reshape the Spurs’ offense. That said, I don’t think the Spurs would be better off with any of those three.

Taylor Young: I don’t think any of these players make the Spurs better, but I’d pick Russell Westbrook for entertainment value and to see what kind of effect he and Pop would have on each other. Now that would be an interesting marriage.