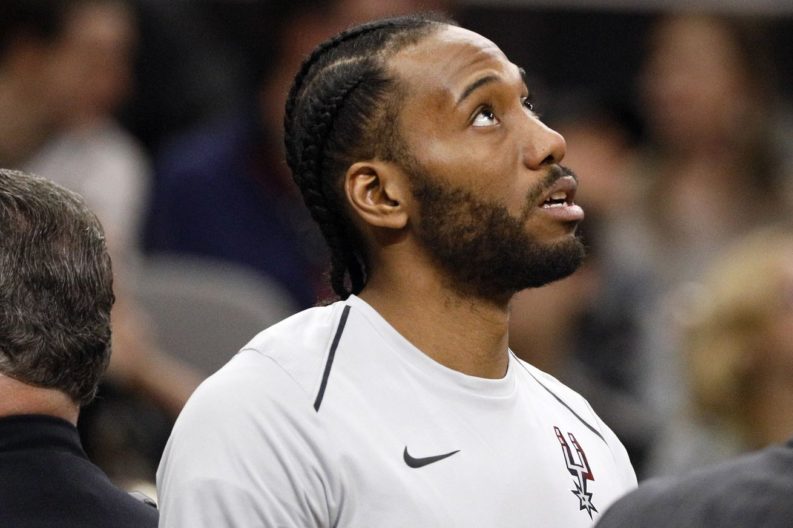 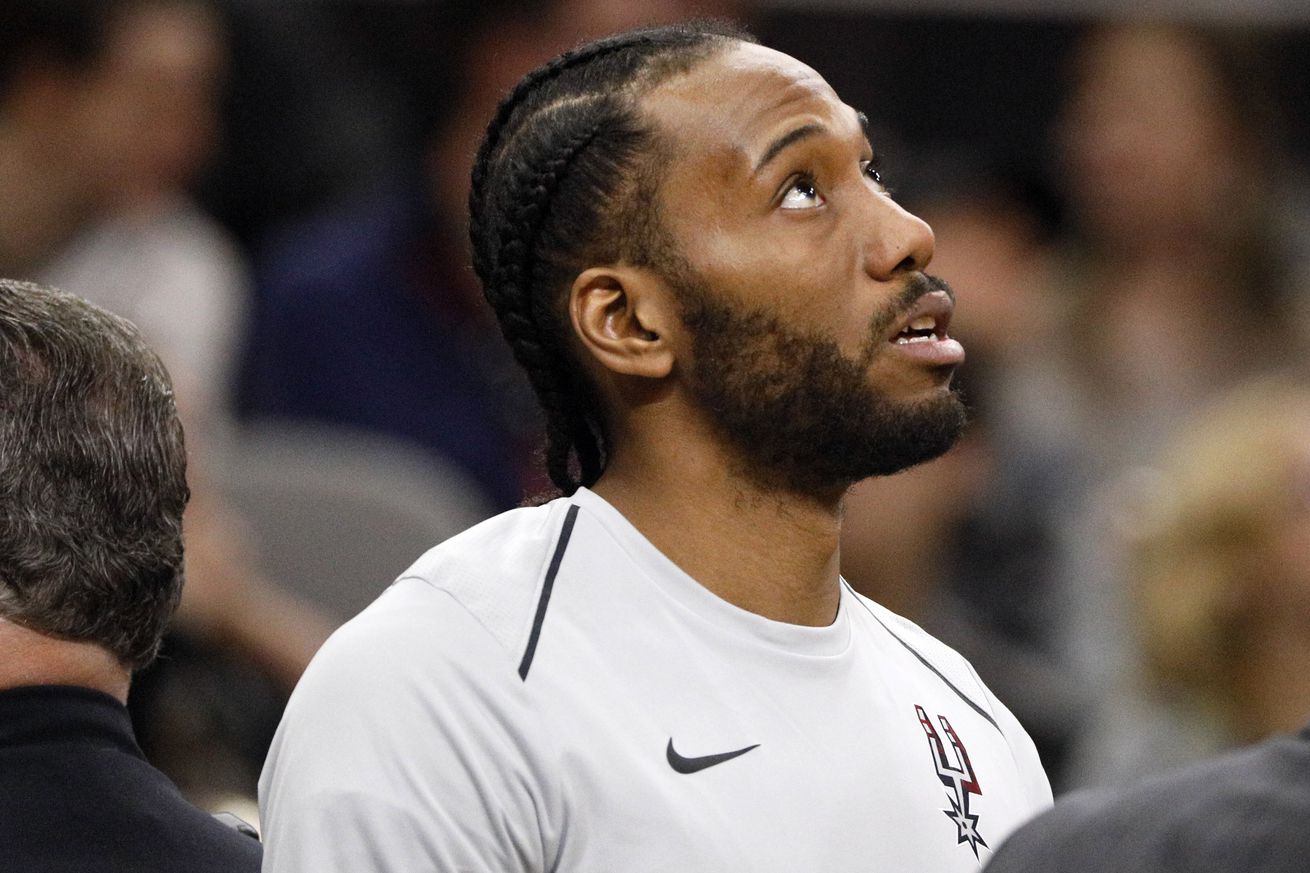 A year’s worth of processing the loss of San Antonio’s best player — condensed into a single article.

So you’re likely familiar with the Kubler Ross five stages of grief model. For anyone who’s rusty on the concept, I’ll give you a quick breakdown. There are five common stages when dealing with any loss: denial, anger, bargaining, depression and acceptance. It should be noted that this process is not linear and some phases may resurface, especially as new information comes to light.

As the news about Kawhi Leonard’s potential future in San Antonio continue to get more and more dire, many will find they have already begun working through the grief. I know I have. So I thought it would be a good idea to provide an overview of where many fans find themselves this week.

If you are like me, denial started early. To be honest, it started when it was suddenly and mysteriously announced that Kawhi would not play during the 2017 preseason due to some ailment that I had never heard of before. (Tendinopathy, whatever it was, couldn’t be that serious, right?) Denial only grew as Leonard’s projected return date continued to push back. Eventually, he played nine games and just as silently as he had returned, he faded back into street clothes.

Then the rumors came — dissatisfaction, mishandling of injury, rift with PATFO — you name it, there was something in the air that created a very un-Spursian atmosphere, and I wasn’t liking it. Not Kawhi, the most understated player in the league. No way he was causing trouble. And Pop? Come on, is there a more revered coach in the NBA? You’re telling me these two men can’t come together and clarify what’s going on?

As days turned to weeks and then months, neither spoke up. Which was fine, that seemed to be their respective natures. But then hearsay somehow took on the appearance of fact, and rumors crisscrossed the internet. And although I remained in a full-blown denial, this is where I also became angry.

In my time on this planet, I have learned to ignore much of what is said. This rationale did not come about easily, but with the twenty-four hour news cycle, the explosion of the internet in my adult years, and a program of recovery that tells me that “what someone feels about me is none of my business,” taking things with a grain of salt or tuning them out entirely has become a pastime.

That said, I was still angry. Angry that Jalen Rose was doubting my team’s continuity and dissing its well-crafted culture. Angry that “league sources” were predicting doom from the shadows. Angry that all of this could be settled with a press conference. A few words. Kawhi steps out to a few cameras and says “I know there’s a lot being said, but none of it is true. When I am 100% and ready, I’ll be right there with my team.” That small gesture would have been enough for me to believe everything was fine.

And you see that? Right there, I was already…

I could take the injury at face value. I could understand precaution. At one point, I heard an interview on a sports radio station. They were speaking with a doctor who had worked with extremely famous athletes (albeit NOT Kawhi Leonard) and he spoke at length about pain management. How the degree of pain a person felt was unique to that individual. The radio host was literally comparing Tony Parker to Kawhi stating that Parker’s injury was a tear and led to surgery. He implied that somehow Leonard’s pain should be less and his return to action should have been shorter than Parker’s. The medical professional clearly stated that Parker may have a greater threshold for pain and be willing to play through some pain on his way to recovery. But in the case of Kawhi Leonard, he may not be willing to play with any amount of pain. That all made sense.

So, I bargained with myself as to when I was going to give up hope of seeing Kawhi Leonard in a Spurs uniform and start believing the rumors. Word came that Leonard would not be joining his team on the sidelines during the playoffs, but that wasn’t enough to convince me to abandon my hopes. I made plenty of excuses. Perhaps he doesn’t want the story to be about him. Perhaps his injury and rehab is going so great that he thinks he could be ready for the second round if the Spurs can eliminate a Curry-less Warriors. Perhaps, perhaps, perhaps.

Then the Spurs were eliminated, and soon after the news hit: the same player who could not be bothered to stand by and support his team because of his physical therapy, was in Los Angeles, at a Dodgers game, with Magic Johnson! That was it. Mind blown. Actions speak louder than words —and this was a guy who said nothing— so all we had to judge him by would be his actions. I had really lost my faith in Kawhi Leonard and his desire to be with the Spurs. That’s when depression hit.

Kawhi’s sitting out went from injury management to speculation that he didn’t want to hurt himself because he was up for a Supermax. The latter seemed more likely. He didn’t want to risk his future and that future may be on anther team. Again, denial and anger with no ability to bargain left me feeling betrayed. The belief that my favorite player (a generational player and someone who I believed was the best in the league) was purposefully leaving his team in the dark rocked me to the core.

Then my concern turned to the Spurs. Could a franchise, even a model one like San Antonio, bounce back from losing a player of this caliber? It’s not hard to see a future in which Leonard teams up with other All-Stars and makes deep playoff runs in Los Angeles while the Spurs fall from contention. Maybe this whole thing is more than just about Kawhi. Maybe the time of Spurs dominance is over. The fan base is resilient but hasn’t had to deal with anything approaching the existential dread that affects those who support continual mediocrity. The worst thing that’s happened to the team in recent memory was losing the Finals to the Heat in Game 6 of 2013. When a fan’s worst anything involves being in the championship round, there really hasn’t been any true adversity. Will it be fun to watch the Spurs in the next few years? It’s impossible to tell. Uncertainty is never comfortable.

Honestly, I am still not ready for this step. As much as my confidence in Kawhi Leonard has been damaged, I would still be willing to wipe away my emotional attachment to this entire season if something pulls Kawhi back from the brink and he decides to stay with the team. I mean, from the perspective of Leonard and the Spurs, there have been no official statements, press conferences, or confirmations of anything . I know, I know, I’m still bargaining or in denial. But it’s all I’ve got to hold onto until I accept a reality in which Kawhi Leonard truly does not want to be in San Antonio anymore.

So here I sit, awaiting an eventual monotone interview with Gregg Popovich that comes hours or days after headlines inform the world where Kawhi Leonard will be playing next year. Pop will stand tall in his Spurs polo, with a gym as his backdrop, his eyes averted as he blandly shares, “Kawhi requested a trade and out of respect, we have negotiated something beneficial for him and us.” He’ll take a couple of questions with his trademark curt responses and when journalists realize they will get no more information from here, he will walk away to start preparing for the 2018-19 season.

Then, and only then, will I be able to finish the cycle and accept everything that’s transpired.