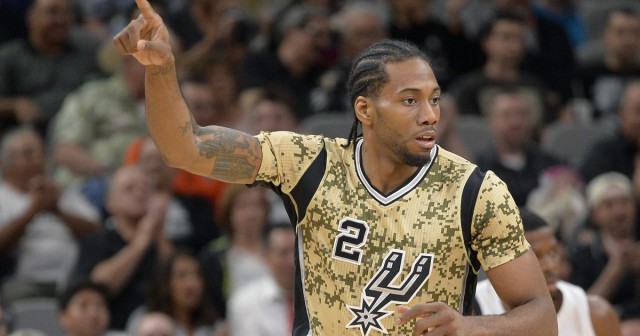 Most other years, Kawhi Leonard would have a legitimate MVP argument.

The best player on the second-best team, putting up career-high numbers (21 points, 31.8 minutes, 46 percent three-point shooting) all while earning universal praise for his defense. That’s a pretty good argument for MVP, unless of course it’s the year of Steph … which it is.

Once again, Curry garnered every single first place vote in the USA TODAY Sports MVP voting, but surely of more importance to Leonard, his Spurs got the victory in their recent clash. In fact, while Leonard wasn’t Curry’s primary defender (he was on Klay Thompson), the Spurs’ versatile swingman had a much better night than Curry in an 18-point, 14-rebound effort. In a contest of dueling styles, the Spurs’ stifling defense won out thanks in no small part to Leonard’s swarming length.

The teams face each other two more times in the regular season before a possible dream series in the Western Conference finals. Though the MVP will be long decided, Leonard doesn’t seem to pay much attention to regular season awards…..Read More