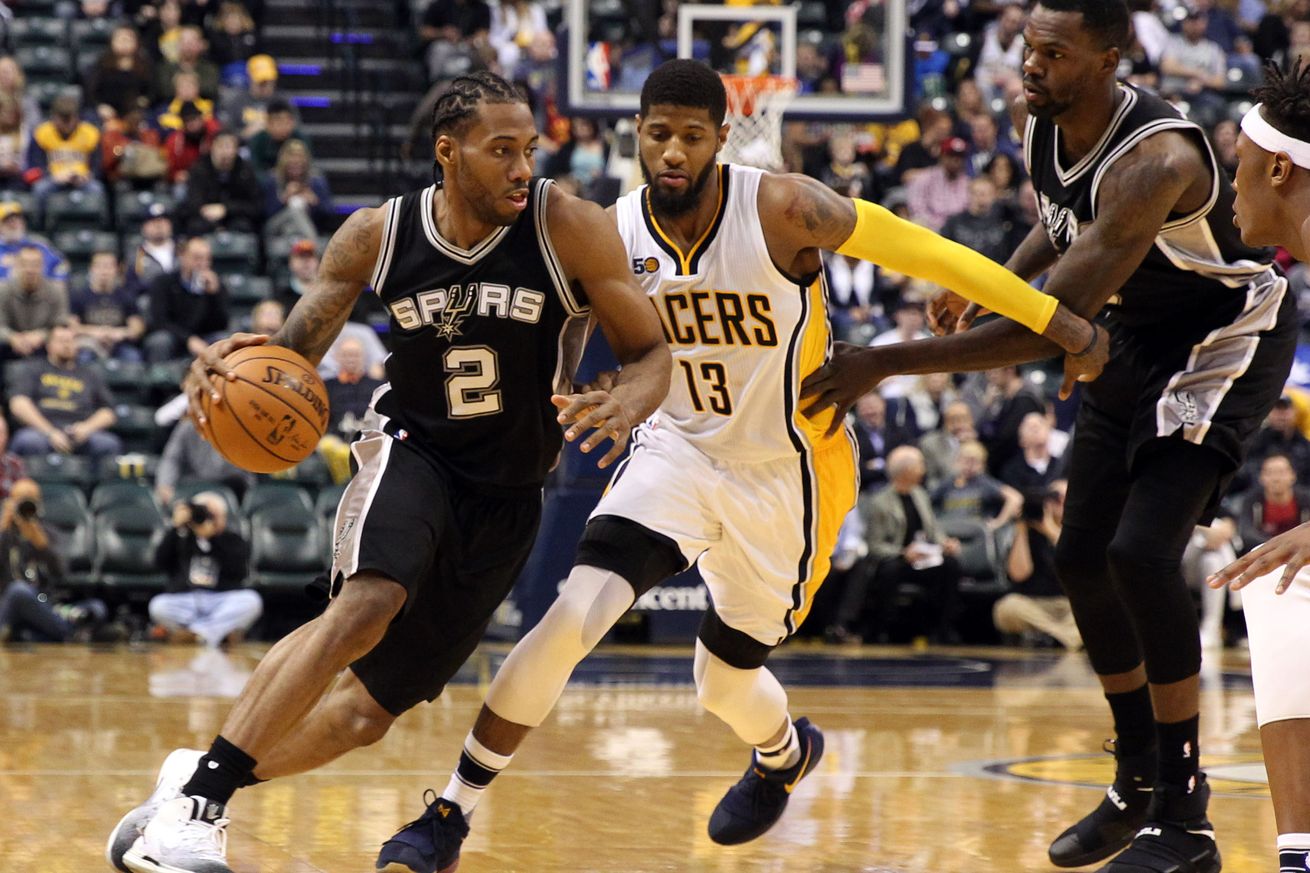 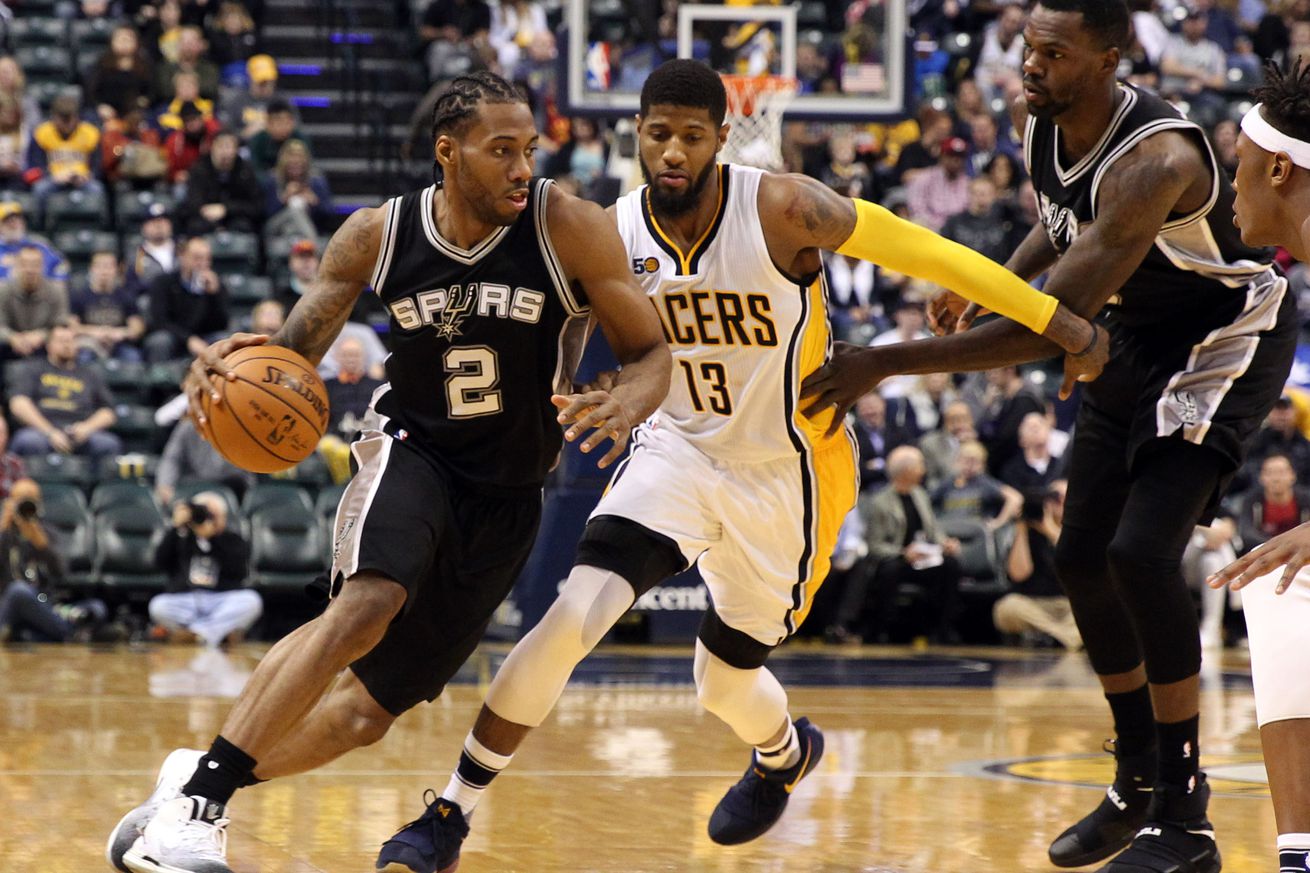 The Pacers provided a tough test for the Spurs in their fifth game of the rodeo road trip, but they pulled out a win late as Kawhi Leonard propelled his team to victory.

Once again, Kawhi Leonard showed that he’s the best basketball player on the planet as he led the Spurs to tightly contested win against a game Pacers squad led by their own superstar, Paul George. But unlike the previous game against the Knicks, when it felt like he had to carry the team on his back, this time Kawhi didn’t have to do it all himself. Fittingly, the key play of the game was a Kawhi Leonard steal that sealed the win for the Silver and Black.

The game started off being very tightly contested as the two teams traded baskets but the Spurs continued their cold shooting from Sunday, and the Pacers were hot. The Spurs were able to bring the score close as the quarter came to a close, but a buzzer beater Triple from Monta Ellis put the Pacers up 31-26 after a quarter.

Patty Mills’ shooting touch looked off to start the second, but he kept shooting and finally the shots started to fall. Kawhi Leonard continued to carry the Spurs offense, but he was also passing the ball and getting it to the open player. The Pacers got good contributions from Paul George and Myles Turner on offense, and Kevin Seraphin provided them with solid presence inside with his big body, but the Spurs chipped away at the lead and were able to tie up the game 49-49 at the half.

The third quarter was closely contested—whenever one team scored, the other answered. There score was tied seven times in the quarter as Paul George and Kawhi Leonard battled head to head for most of the quarter. Leonard didn’t do it all himself, he was the recipient of this beautiful pass for an easy dunk.

The Spurs are an alley-ooping team now
We really living in an alternate realitypic.twitter.com/j0LkLYmMbm

This game was starting to feel like it was going to have a really exciting finish, and it didn’t disappoint. Once again, the teams kept the score in a very narrow range and kept trading the lead, as George would hit one clutch shot after another and Kawhi would answer. But the most important plays at the end weren’t necessarily the prettiest, but they were effective. With just under a minute left, Tony Parker drove to the basket and seemed to lose control of the ball. Or maybe it was a pass. Yeah, let’s call it a pass. It went right into Lamarcus Aldridge’s hands, and he took it strong to the basket* for an old-style three point play, putting the Spurs ahead 105-100.

Big bucket for the big guypic.twitter.com/DeYDqEPK4f

Unfortunately, instead of running time off the clock, the Spurs quickly fouled Paul George on the next possession and the Pacers were able shoot free throws after just four seconds. George hit one of two, and the Spurs only had a precarious 4 point lead with 48 seconds left. On the succeeding possession, Kawhi ran some time off the clock and drove the basket into the lane, but then the unthinkable happened. He lost his footing and the ball, and suddenly Paul George was headed up the court to cut the lead to one or two points with plenty of time still left on the clock. But then something even more amazing happened … Kawhi got up off the floor and caught up to George and slapped the ball away, and it bounced harmlessly into the hands of Lamarcus Aldridge.

Kawhi Leonard got the best of his matchup with Paul George tonightpic.twitter.com/kmuwrzhBo5

The Pacers fouled Tony Parker, who hit a pair of free throws to put the Spurs up by 6. The Pacers weren’t done yet, with Paul George’s deep triple once again closing the gap to three, but the Spurs hit their free throws and the Pacers, out of timeouts, ran out of time. Spurs win 110-106.

Bill and Sean asked Tony Parker about passing the ball to teammates who miss shots. He had a good answer. pic.twitter.com/Y5eOxH1WB1

A song dedicated to Mr. Leonard

The Spurs are now 42-13 and they’re in second place in the Western Conference, roughly one mile behind the Warriors and 4 games ahead of the Rockets in the loss column. The Spurs don’t have long to rest, they have another early game on Wednesday, at 6:00 pm against the Magic in Orlando. Then they have a nice nine-day break until they play the Clippers on Friday February 24 in Los Angeles. Except for Kawhi. He has a game this Sunday.