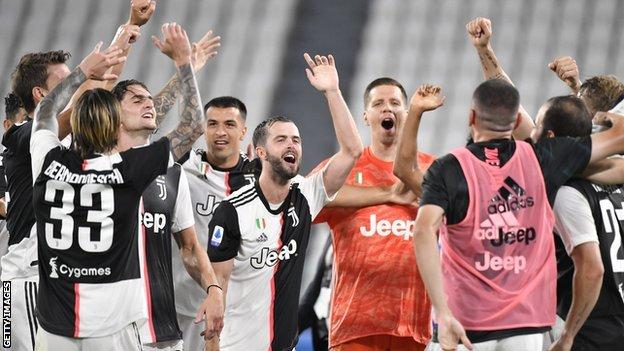 It took two Andreas and an Antonio to start a Juventus dynasty. It might take just one Andrea to end it.

The Bianconeri have won nine consecutive Serie A titles, but when they face leaders AC Milan at the San Siro on Wednesday (19:45 GMT kick-off), they will do so 10 points adrift and with their domestic dominance under greater threat than at any other point in the past decade.

At the helm is manager Andrea Pirlo, whose genius on the pitch helped initiate the era of success that also saw them win the Coppa Italia and the Italian Super Cup four times each, and reach two Champions League finals.

From Pirlo’s first meeting with Juventus owner Andrea Agnelli in 2011, the pair have enjoyed a close relationship. “It was footballing love at first sight,” Pirlo wrote in his autobiography.

Under the guidance of then manager Antonio Conte, Juve dominated Italian football in a way that even they – 36-time champions – had never done before.

Pirlo – from architect to destroyer?

While Pirlo’s arrival in Turin as a player started an era of unimaginable success, his return as a coach may well result in the destruction of it.

Juventus are fifth in the league – albeit with a game in hand – with only seven wins out of 14. When the champions take to the pitch at AC Milan’s San Siro, they will not spark fear into their opponents as they once did.

Embarrassing draws against the likes of newly promoted Crotone and Benevento, not to mention a 3-0 loss to Fiorentina – a team that had managed only two Serie A wins – has drawn justified criticism and means they are no longer favourites.

Juventus look tactically confused, nervous on too many occasions and vulnerable when attacked in numbers. A team renowned for their overwhelming control of a match cannot seem to even control their emotions these days.

Five times already this season a red card has left Pirlo with only 10 men on the pitch.

Seeking to provide explanations for why Juve have been stuttering under Pirlo, Agnelli explained that a lack of a pre-season has hindered their start. While the top clubs in Italy have all profited from a certain consistency in these anomalous two seasons, Juventus are one of the few teams who have changed coach and therefore not had the time to transmit new ideas during a pre-season.

Pirlo has been forced to experiment during matches, resulting in some bizarre displays and choices at the start of the campaign. Players were not used in their usual roles and there were tactical imbalances all over the pitch. Yet, slowly, we have begun to see the methods behind his decisions.

Pirlo wants an audaciously vertical team that presses high up the pitch, wins possession quickly and immediately delivers the pass to a goal. He wants to attack with five and has no desire to hold meaningless possession of the ball.

When it works, such as against Parma or Barcelona in the Champions League, it is rather beautiful to watch. The Bianconeri are capable of unpredictable patterns of play and exhilarating attacks, and they have a defence that has held up well under the pressure. Only Napoli have conceded fewer goals in the league this season.

The problem, though, is that it does not always work and one is never quite sure which Juve side will show up, especially if they are missing either Serie A top scorer Cristiano Ronaldo or Champions League top scorer Alvaro Morata. Both have proved indispensable.

Juventus either command the game with the authority of champions, or dissolve under the pressure of it. They are vulnerable when attacked in numbers and struggle to break down teams who defend in a low block. Moreover, when obstacles present themselves, Pirlo struggles to address them adequately because of his inexperience.

For example, against Fiorentina, midfielder Juan Cuadrado was shown a red card, leaving Juve down to 10 men after only 18 minutes. Pirlo chose to take off midfielder Aaron Ramsey and bring on defender Danilo, a decision that led to his side ceding complete control and possession, and a 3-0 defeat.

Juventus, like many big teams this season – from Liverpool to Barcelona – are struggling when compared with previous heights, but to blame Pirlo for it all is unfair.

What was expected from a man who received his coaching badges on 14 September 2020, just days before taking charge of his first professional match?

And it is worth remembering that Massimiliano Allegri, who led Juventus to the Champions League final in 2015, only had 24 points from his opening 14 games of the 2015-16 season – and they went on to win the domestic double.

Will power shift from Turin to Milan?

It will be the tests against AC Milan on Wednesday and then Inter Milan in a few weeks that will surely provide us with more answers as to what to expect from Pirlo’s men.

Milan, who have seemingly started a new project every summer, have finally found consistency.

Under the tutelage of the pragmatic Stefano Pioli, the youngest squad in Italy have been producing sensational performances and have not lost in 27 league games, despite the congested fixture list and the many absences they have been forced to cope with.

Thanks to the experience and mentality of serial winner Zlatan Ibrahimovic and Pioli’s tactical expertise, Milan are attempting to start a winning era that Juventus ended in 2011. Drawing 1-1 with Juve in February of that year and losing the title to them that season resulted in a decline the Rossoneri have struggled to arrest until now.

Both Pioli and Pirlo insist Wednesday’s game is not decisive and the true winner may well prove to be Inter, who many believe are the real favourites to win the league. The Nerazzurri boast squad depth and an experienced coach in Conte. More importantly, they have no European competitions to contend with so should arrive in fine condition for every match.

January should provide Serie A followers with more answers as to who really is capable of challenging for the title between the big three.

If Pirlo does fail to win the 10th straight title, then the blame lies with Juve’s management, who insisted upon a gamble at a time when they boast the likes of Ronaldo – a player, perhaps unlike his manager, who is ready to win now.

So an Andrea might be to blame for the end of an era, just not the one you thought.