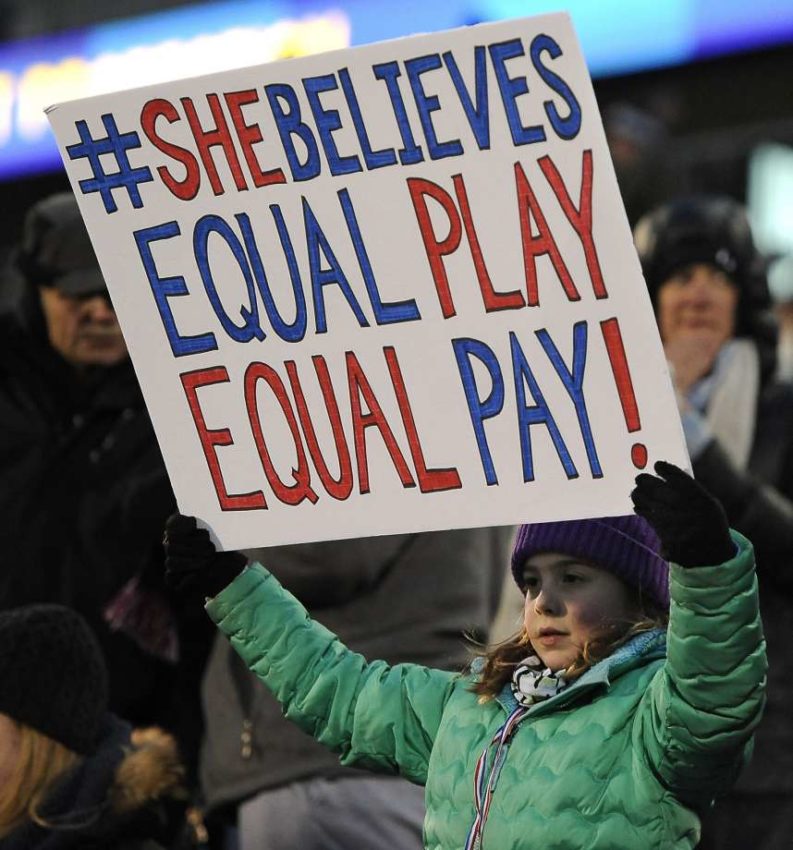 In this April 6, 2016, file photo, a girl holds up a sign for equal pay for the U.S. women soccer players, during the first half of an international friendly soccer match between the United States and Colombia, in East Hartford, Conn.

In this April 6, 2016, file photo, a girl holds up a sign for equal pay for the U.S. women soccer players, during the first half of an international friendly soccer match between the United States and Colombia,

Chants of “Equal pay! Equal pay!” erupted among a crowd of nearly 60,000 in Lyon, France, last July when the U.S. women clinched their fourth World Cup championship with a 2-0 victory over the Netherlands.

Nearly 10 months later, federal judge R. Gary Klausner, ruling in the U.S. District Court for the Central District of California in Pasadena on Friday, was unpersuaded by the women’s legal case for that demand. Klausner rejected the U.S. women’s soccer team’s argument that it has been underpaid relative to the U.S. men in the gender-discrimination suit filed in March 2019.

In a ruling delivered late Friday, Klausner sided with the players’ employer, the U.S. Soccer Federation, which argued that the claim of unequal pay based on gender discrimination should be dismissed.

Klausner ruled that the players’ additional claims of unequal treatment in terms of travel, medical staff and training equipment can go forward. A trial is scheduled to begin on those questions June 16.

But in granting summary judgment for U.S. Soccer on the matter of unequal and discriminatory pay, the judge gutted the symbolic and substantive heart of the women’s lawsuit.

Molly Levinson, the players’ Washington-based strategist and spokeswoman, said the women would appeal.

“We are shocked and disappointed with today’s decision, but we will not give up our hard work for equal pay,” Levinson said in a statement. “We are confident in our case and steadfast in our commitment to ensuring that girls and women who play this sport will not be valued as lesser just because of their gender. We have learned that there are tremendous obstacles to change; we know that it takes bravery and courage and perseverance to stand up to them. We will appeal and press on. Words cannot express our gratitude to all who support us.”

U.S. Soccer responded with a statement of conciliation. “We look forward to working with the Women’s National Team to chart a positive path forward to grow the game both here at home and around the world,” it read. “U.S. Soccer has long been the world leader for the women’s game on and off the field, and we are committed to continuing that work to ensure our Women’s National Team remains the best in the world and sets the standard for women’s soccer.”

Efforts to resolve the dispute out of court failed multiple times and as recently as late February, when each side was asked to submit proposals for ending the standoff.

The players requested nearly $67 million in back pay and compensation.

U.S. Soccer requested summary judgment, asking the judge, in effect, to toss out the women’s pay claims as groundless.

That’s essentially what Klausner did as it relates to the issue of pay inequity, ruling that the women’s legal argument was “insufficient to create a genuine issue of material fact for trial.” In doing so, he handed the internationally dominant and wildly popular U.S. women’s team, which has won four Olympic gold medals and four World Cups, a stunning defeat.

From the start, the dispute was complicated by the fact that the U.S. men’s and women’s teams have starkly different compensation systems, which makes apples-to-apples comparisons impossible.

The men’s team is paid for individual performances in a pay-for-play model, while the women opted for a pay structure that includes more security in the form of negotiated annual salaries, maternity and child-care benefits, and severance pay when they are no longer on the team.

While direct comparisons are difficult, the women’s lawsuit provided snapshots to illustrate ways in which the women earn considerably less than the men, who have never won an Olympic medal or advanced past the quarterfinals at the World Cup since they finished third in 1930.

But in ruling in favor of U.S. Soccer on the pay issue, the judge noted that the women’s national team had rejected an offer to be paid under the same pay-for-play model as the men, instead opting for more guaranteed money.

The court found the women’s team could not, then, retroactively claim that its CBA was inferior to that of the men’s. It also noted the difficulty of quantifying the added job security that the women’s contracts guaranteed, unlike the men’s.

The U.S. women’s national team’s class action, gender discrimination lawsuit was filed March 8, roughly three months before kickoff of the 2019 Women’s World Cup, on International Women’s Day. With all members signing on, they argued that despite doing essentially the same job as the U.S. men’s national team, they were receiving inferior wages, working conditions and investment in their game from U.S. Soccer.

The Washington Post’s Jake Russell in Washington contributed to this report.