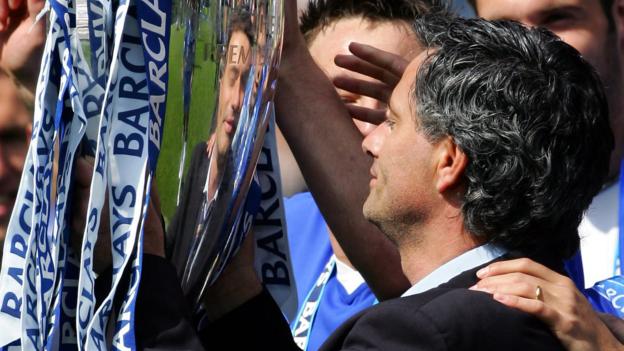 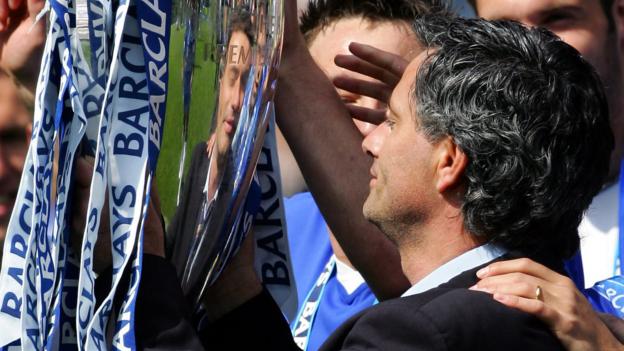 When a fresh-faced Jose Mourinho won the Champions League with Porto in May 2004, he barely stopped to collect his medal before striding off with purpose down the Gelsenkirchen tunnel.

His destination was preordained, off to replace the “dead man walking” at Chelsea, the likeable Claudio Ranieri, who was sacked within days of leading the Blues to a second-placed finish and a semi-final place in the Champions League.

Mourinho had grabbed the Premier League’s attention when sprinting down the Old Trafford touchline in the last 16, and interest was piqued even more when he famously pronounced himself “The Special One” during his first news conference as Chelsea boss.

Loved and loathed in almost equal measures, Mourinho was a gust of fresh air who swept through the English top flight, delivering Chelsea’s first title win in 50 years on this day 15 years ago.

Here’s how he did it.

Chelsea had been ensconced in the top six of the Premier League for nigh on a decade by the time Mourinho arrived. With Roman Abramovich in the corridors of power Chelsea had thrown money at the team 12 months earlier, with Ranieri making some key signings in Joe Cole, Damien Duff and Claude Makelele.

What was lacking, it was felt, was a coach with the swagger and the genius to turn a good side into champions. A “special” coach.

Arsenal had won the previous season while going unbeaten and Mourinho made some big signings of his own to take them on.

Petr Cech, Didier Drogba, Ricardo Carvalho and Arjen Robben – to name half of his summer additions – would all play a huge part in the crushing title win.

And it was a procession in the end. Chelsea won 29 of their 38 Premier League games – losing just once – and incredibly conceding just 15 goals.

A change of shape

You may feel that you know exactly what to expect from a Mourinho team nowadays. Methodical? Well drilled? Sure. But exciting?

Mourinho quickly adapted his tactics during his first season at Stamford Bridge. Initially he wanted to play a 4-4-2 diamond, with Frank Lampard playing in behind two strikers, as Deco had so artfully done at Porto.

However, Mourinho soon found that his side were struggling to create enough chances so made use of the best holding player in the world in Claude Makelele – so good the position was named after him – and moved to what was called ‘the open diamond..

That switch gave more licence to Eidur Gudjohnsen or Didier Drogba and allowed the wingers to come in, Damien Duff on one side, Arjen Robben on the other. It’s safe to say it worked.

After their sole defeat at Manchester City in October, Chelsea would drop just 10 points before sealing the championship at Bolton on 30 April 2005.

Not everyone was a fan though.

“You could say that our football was more attractive to watch but they are very efficient,” said Arsene Wenger at the turn of 2005.

“They are a bit like a matador – they wait until the bull gets weak to kill him. They have the patience to wait as they have an experienced squad. When the bull has lost enough blood and becomes a bit dizzy, they kill it off.”

Chelsea’s players soon saw both carrot and stick from Mourinho. The manager tore into his players at half-time of the 2-2 draw with champions Arsenal in December 2004. Thierry Henry had scored twice, superbly, to leave the Blues trailing.

The Portuguese threw Lucozade bottles and kicked tubs of Vaseline around in a fury, angry that his side had been on top but trailed.

Eidur Gudjohnsen equalised in the first minute of the second half. Message received.

Soon Mourinho would tell his players that not only would they be champions, they would win the league at Bolton with three games remaining.

Again, he was spot on as a Frank Lampard double sealed the win, but only after another half-time dressing down which saw Mourinho tell two of his players to give their shirts to him and assistant Steve Clarke.

“For five minutes we will do more than you managed,” he said. “And then after five more minutes, we will need oxygen and an ambulance.”

Mourinho wasn’t needed on the pitch as Lampard’s goals brought the title home, with Joe Cole later leading the singing while standing on top of the mobbed team bus.

Parking the bus and upsetting the apple cart

“Please do not call me arrogant because what I say is true. I’m European champion, I’m not one out of the bottle, I think I’m a special one.”

From the moment Mourinho said that during his unveiling, the British media knew they were in for a ride. For years the top end of the Premier League had been about the clash between Wenger’s Arsenal and Sir Alex Ferguson’s Manchester United. Now a new, brash, bold character made it a trio.

“Parking the bus” has become universal to describe a team who come and defend, but it was Mourinho who first said it about Tottenham just a month into his Premier League career.

“As we say in Portugal, they brought the bus and they left the bus in front of the goal.”

As the season wore on and Chelsea remained top of the tree, Wenger attempted some classic mind games by questioning whether they would stay the course.

“It is a difficult psychological challenge to deal with when you’re leading,” he said.

“When you are in front and everyone says you have already won the title you have to face up to the prospect that you can only lose it from there.”

Ferguson weighed in, suggesting that Chelsea’s trips to Blackburn, Liverpool and Everton in January and February could be key.

“It is when Chelsea come north that you will see,” said Ferguson.

“They have to go to Liverpool and Everton, as we do, but our record isn’t bad there. It is different after the new year – there are different pressures.”

The trip to Ewood Park did look tricky but Robben’s goal secured another win and another excellent quote.

“Look at the blond boy in midfield, Robbie Savage, who commits 20 fouls during the game and never gets a booking,” Mourinho said.

“We came here to play football and it was not a football game, it was a fight and we fought and I think we fought fantastically.”

This Chelsea team could do it all.

‘Not a defensive team, a complete team’

Mourinho’s champions set records for most wins, most away wins, most points, most clean sheets and fewest goals conceded in a Premier League season. But are they undervalued?

“These are records that don’t show a defensive team, they show a complete team,” says Rick Glanvill, Chelsea author and official historian.

“That’s what made that team different. We could shut up shop and protect a lead if we needed to, squeeze the life out of a game like a boa constrictor.

“But that season there were a number of occasions where Jose would take off one of the full-backs and bring on an attacking player. His substitutions were incredible.

“It was such a devastating attacking team with Drogba, Gudjohnsen, Robben, Duff, Cole and Lampard. The 2005 team is definitely one of the best sides the Premier League has seen.”

Chelsea would win the league again in 2005-06, before Mourinho’s shock departure in September 2007.

He later returned and won the title again in 2014-15. And now the question remains – can he deliver one for Tottenham?