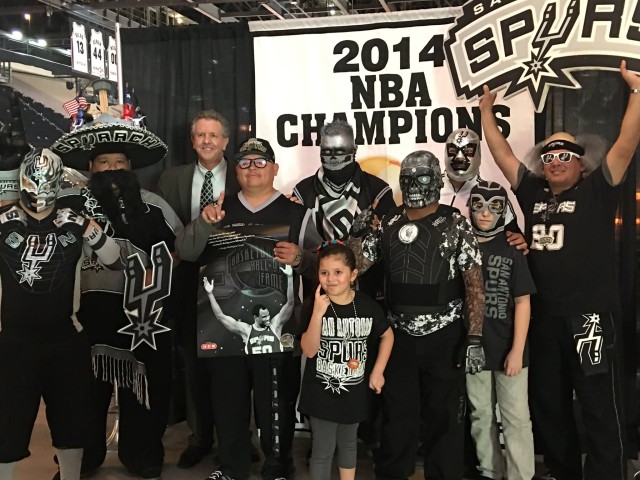 Recently we have had an influx of fans asking to join The Spurs Fan Cave, we are thrilled with the over whelming response from our fellow Spurs fans. However we just wanted to let the fans know you are already part of the Spurs Fan Cave.  The Spurs Fan Cave is not a physical place it’s an Ideal, meaning it’s an embodiment created to bring Spurs fans together, so we can share our mutual love and admiration for the San Antonio Spurs.  These places can be found all over the city from your house a Spurs watch party event a game at the At&t Center or a Spurs March. The name Spurs Fan Cave was created because it embodies the very essence that lies at every die-hard Spurs core. The Spurs Fan Cave is that sacred place we watch the games it’s our Spurs Cave. It’s where we hang pictures and posters and other memorabilia of the Silver and Black and share the experiences with friends and family. The Spurs Fan Cave is the very spirit that lies within all Spurs fans and gives us the ability to support the team and share in the Spurs experience with all fans throughout the city. We want to share the Spurs Fan Cave experience this season with you the Spurs fans. Join the Spurs Fan Cave revolution by coming out to one of our many watch parties all over the city. We also invite all Spurs Fans to come out to our Spurs March Saturday April 9th at the Tower Of Americas. Thanks for continued support and we look forward to seeing you soon. Go! Spurs ! Go!

We do all this for you the Fans.