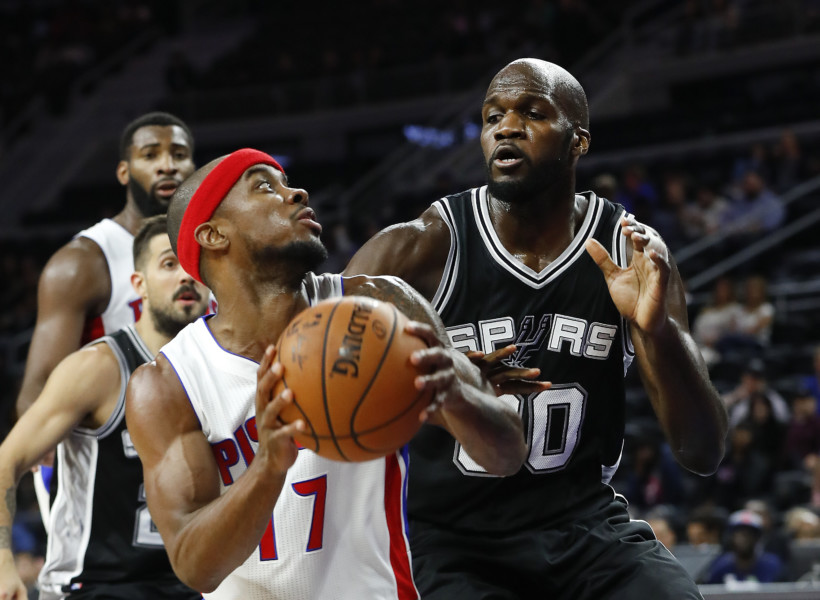 ORLANDO — There’s a brief moment when Joel Anthony, all 6-9 and nearly 250 lbs. of chiseled muscle, opens his eyes wide and expressively, chuckling softly as he’s carried away by a wave of nostalgia. “I was always at Target back then,” says Anthony.

The 34-year-old veteran has just been taken back to the earliest days of his career by a reporter who recalled seeing him at the chain department store during his rookie season, standing out awkwardly in the housewares section many years ago. Despite the passage of time, it’s clear that Anthony fondly remembers the frequent trips to purchase basic necessities as he was trying to get his life, both on and off the court, in order.

He was a relative unknown, then, Canadian-born and far from a household name out of UNLV. It was 2007 and the Miami Heat, one long season away from winning their first title, were in the process of rebuilding. Shaquille O’Neal was lighting matches to burn his latest bridge. Dwyane Wade and Alonzo Mourning were both injured. A nondescript collection of misfit castoffs filled out the rest of the roster. The team would miss the playoffs that season, the beginning of a gap connecting two different championship eras.

Anthony went undrafted, of course, but earned a spot through sheer work and determination. He persevered, scraping for the occasional start despite his limitations on the offensive end. He carved out a niche defensively, fighting for every rebound and trying to block every shot. His tenacity would be his biggest asset.

Miami’s rebuild wouldn’t last long. In 2010, when the team pulled off the NBA’s most successful free-agent coup, there were questions whether Anthony would play a part in future title pursuits. The answer was a five-year contract that secured his role on one of the greatest teams of all time.

Anthony stood out as sorely on those teams as he did in the midst of Target’s row of diningware. Against the star-studded spotlight of LeBron James, Chris Bosh and Wade, Anthony’s low-watt approach to the game barely stood out. In seven years in Miami, he averaged just 2.4 points, 3.1 rebounds and 1.2 blocks per game. And yet he still was a factor, a tireless worker appreciated by his teammates, and part of two championship teams.

It’s nearly the start of the 2016-17 season and Anthony finds himself still fighting for a spot, this time with the San Antonio Spurs. Tim Duncan may no longer be there to help protect the rim, but there’s still no lack of frontcourt depth, including this summer’s additions of Pau Gasol and David Lee as free agents. Anthony was a late summer addition to the roster and is facing a difficult climb.

When asked what he’d bring to the Spurs, Anthony replied, “I just want to find a way to contribute…whenever I’m on the court, being able to help there. But even on the bench, in the locker room…as long as I’m a positive influence on this team in any way, I just want to be able to do that.”

He’s had to learn to adjust late in his career. Midway through the 2013-14 seasons, he was traded to the Boston Celtics in a cap-clearing move that upset the Heat’s tenuous grip on team chemistry. A few months later, he was shipped out again to the Detroit Pistons, where he spent the last two seasons as a reserve.

Anthony, for his part, seems unphased by the changes.

“The transition hasn’t been that strenuous,” he said. “I’ve been playing basketball for a good amount of time in the league. As the years have gone by, it’s gotten a little bit easier.”

Finding a way to fit in with the Spurs — a notoriously heady organization — has been a challenge.

“Obviously, there’s a lot of stuff to learn because every team is different and this team definitely has their way of executing and going through things.”

But Anthony has stayed positive.

“The adjustment process has been good for me. I feel I’ve been able to pick up on stuff pretty well and, you know, I’m just trying to keep learning and keep getting better.”

The departure of Duncan doesn’t really change the way the Spurs operate; that team’s culture is carried on by the team’s veteran core and head coach Gregg Popovich. Anthony acknowledged the team’s philosophy is still very present and it’s one he really appreciates.

“I think most really good teams have their own culture,” he explained, “and this team is no different in terms of how they play, how they think, how they interact with one another…I think that’s one thing that makes this team extremely good and has made them good for years.”

But it’s clear that San Antonio is operating under a different timeline, one expedited by Duncan’s absence. LaMarcus Aldrige and Kawhi Leonard are the team’s future, and they’ve added a group of international wing players that are looking to make their mark in the NBA.

In a preseason game against the Orlando Magic, Anthony continued to make his case for a roster spot. In just 10 minutes of play, he chipped in reliably, adding seven points, four rebounds, one block and one steal. It’s eerily similar to his career stat line, a testament to his consistency if nothing else.

Whether the Spurs’ change in direction means a slight shift in philosophy, one that trumps potential over experience, remains to be seen. But if Anthony is able to secure a spot, you can guarantee he’ll bring the same clockwork production, even as the grains of his career hourglass drop more quickly.

He’ll keep endlessly working until they run out, just as he’s always done.