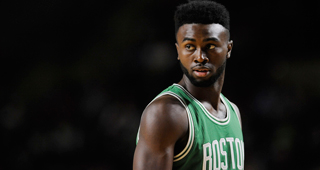 Jaylen Brown and Jayson Tatum addressed the media together after a mob stormed the Capitol with little resistance by police officers.

“It reminds me of what Dr. Martin Luther King has said, that there are two split different Americas,” Brown said. “In one America, you get killed by sleeping in your car, selling cigarettes, or playing in your backyard, and in another America you get to storm the Capitol and no tear gas, no massive arrests, none of that. It’s obvious — it’s 2021 and I don’t think anything has changed.”

The Celtics left the floor before tipoff and had a players-only meeting to talk about the riots in Washington D.C. Brad Stevens thought the game would be called off.

“[The coaching staff] left so the team could come to a decision,” Stevens said. “Just left it at that. If our guys chose not to play tonight, they had the full support of myself, my staff and our organization.”

Tatum said Celtics players discussed their options and decided they could better broadcast their message by playing, rather than sitting out.

“I just feel like the same energy should be kept as when we see our people peacefully protesting for things that we see our people getting murdered on TV and live and videos,” Tatum said. “And they’re protesting the Capitol, or rioting the Capitol for losing an election. It’s two different things. And I want the same energy on TV to be, you know, ‘they’re thugs’ and ‘they’re criminals,’ the same terms that they use when they see our people protesting for losing our lives. I think it’s bigger than basketball, it’s bigger than the game today.”

Brown said he was unsurprised by both the Jacob Blake ruling and by Wednesday’s events.

“I think that America is kind of built on a lot of racism,” Brown said. “That’s the foundation, and we don’t even flinch or shift out of any of those idea. I think it was common sense for a lot of people to be upset and things like that, so all of us felt the same way.

“But using this platform that we have is important to us. We are role models, we are members of our community, we do have people looking up to us, and we want the next generation to know where we stand. We want the next generation to know like, hopefully it’s better than this one. So we want to continue to keep those conversations alive. We want to compartmentalize, but at the same time, we want to voice our opinions through the media, through our platforms, through our influence to let people know this is not okay.”