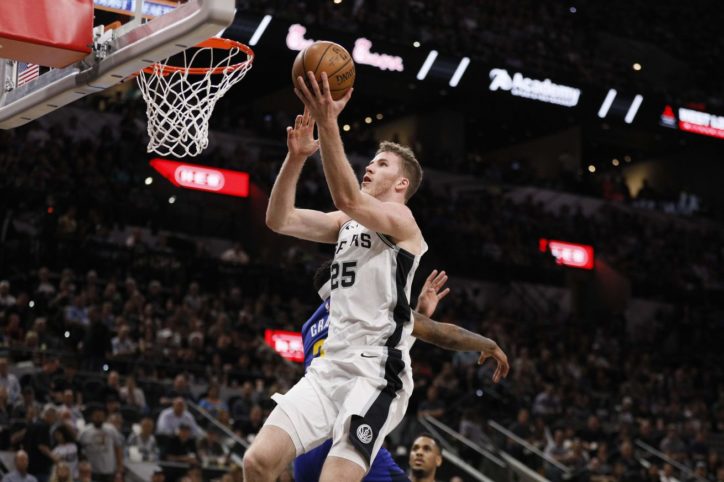 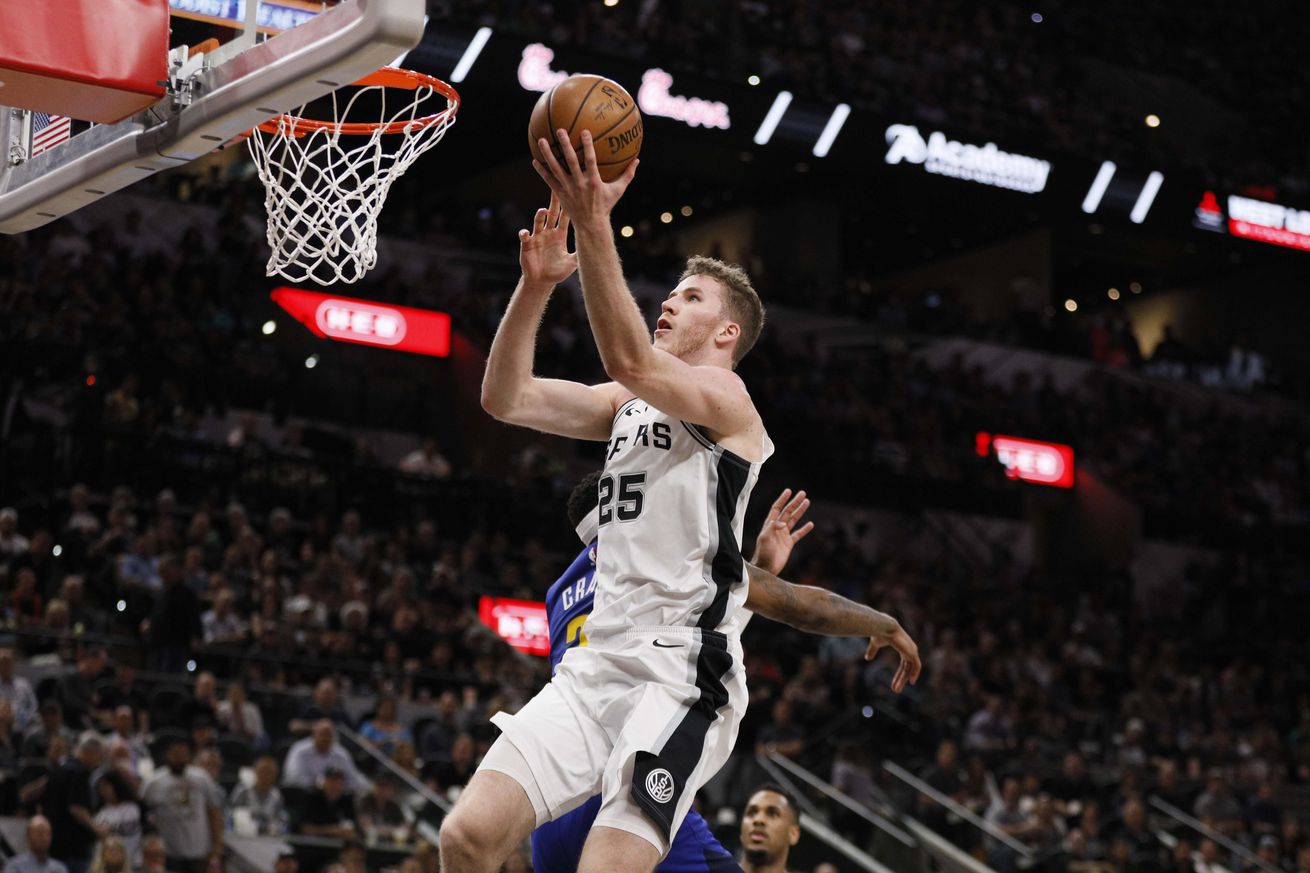 The following article has been provided to PtR by Andreas Barth, who covers basketball for Austrian TV station ORF. Since Spurs big man Jakob Poeltl joined the NBA three years ago, becoming the first Austrian to make the league in the process, basketball popularity has seen a rapid rise in his home country. Poeltl is currently spending his summer in Austria and recently did an interview, and Andreas was kind enough to get in contact with us and provide a transcript. Enjoy!

Jakob Pöltl is the first Austrian in the NBA. Basketball here is not that big, but with Jakob making the NBA it got bigger, and the press conferences whenever he is here are packed. He is in training right now. At the end of this month he will do a basketball camp for kids, and at some point he will be on vacation.

He recently did an interview here, and two things stuck out for me:

Here is a transcript of what all he had to say:

On coming home to Vienna and his to-do list this summer:

It has become a regular thing in summers to come home. Right now I am in full training mode and have not been on vacation yet. I was working in the gym on my strength, there was a coach from the Spurs here, she helped me with that in the gym.

What is different this summer is that my training does not focus just on my shooting. The Spurs want me to work under the rim, work on my post-up. My game there should improve. It is something that is different from the Raptors time. With the Spurs I am more involved in the offense. I also liked my role that I had on the Raptors, but here it is more “random” — I get in situations where I get more trust. I like the fact that I get more responsibility. So I have to work on my post moves. That will be a focus point this summer. For my future, the Spurs system is a good one to become a better player.

On the fact that many teams use their bigs as three-point weapons:

The Spurs told me that it is a bonus if I am able to shoot a good three. But of course my strength is somewhere else. And we have such great shooters on our roster that I do not think it is urgent right now for me to become a sharp shooter. There is no pressure on me.

On his first season as a Spur and working with Coach Pop:

Very positive season, a cool year, the Spurs did everything to make the transition from the Raptors to the Spurs as smooth as possible for me. A new team, new coaches — it was not easy, up and downs. But I think I developed throughout the season, so it was a good season for me.

I loved working with Popovich. I got clear instructions what to do basketball-wise. Personally it was sometimes — especially at the beginning — not easy. Pop is very unique, and it took some time to figure everything out. There is a lot respect around Pop, sometimes he plays with that, but the message is always clear and direct, and I love that. Off the court he is very easy and relaxed, much more then my former coaches. Also I have a very good relationship with other “important” guys on the Spurs, everybody was very nice.

Sometimes, when we were down after a lost game, Pop reminded us about other things in life that are important, not just basketball. There are fun things in training, there are film sessions. We watched a documentary about penguins that showed us how they work as a team and how they communicate. We visited museums, went out together to dinner. Very unique, I was not used to those kind of methods, but I enjoyed them.

From day one I was told that I have to take care with the fouls. It was not such a big thing at other places I played, with the Spurs it is a big factor to not foul. The fact that sometimes after a quick foul or a bad defensive rotation I was benched immediately was hard at the beginning, but that is the Spurs way. I was mostly back in the game soon after, so I learned from that.

Was he surprised that he got that much playing time in the playoffs?

Well, not that surprised, but proud. Of course I know that it was also due to the fact that we played Denver and they play a big lineup — that works for me. I hoped that I made a good impression in the playoffs. (Nikola) Jokic is one of the best players out there, and it was tough. You can’t stop him, he is too good. You have to try to make it as hard as possible for him. Everything runs through him in their offense. I tried to make it hard on him, sometimes it worked, sometimes it did not, but I guess I did quite okay.

The fact that he was called a dirty player because one screen against (Jamal) Murray was seen as not okay — did that bother him? He never had “bad press” before:

Even if something like that never happened to me, I guess that is just playoff talk. Those things are used in order to influence the referees a little. But I did not care that much. As long as the referees say it is a legal screen I do my thing. I don’t want to find new friends on the basketball court, I want to win games. So it did not affect me.

Any ideas why the Spurs were a good team at home and a rather bad team away?

We asked ourselves that question very often. I think there are many things that combine: Self esteem — our shots were more confident at home. The fans in San Antonio are great, but I can’t tell you the one reason. It will be something we have to work when we come together again.

On DeMar DeRozan, the player he played with all his NBA career:

The trade brought us closer together than we were in Toronto. With the Raptors of course we talked, but now we have a connection because of our history. It is good to have him around. Of course he is a little older, he has his family, so we don’t hang out and play PlayStation or stuff like that.

It was a good chemistry, due to the fact that we did a lot of things off the court as well. There were a lot of new guys this season, so I guess the chemistry will be even better next season.

On the fact that the Raptors are in the Finals:

I have a lot of contact with Pascal Siakam and with some other guys like (OG) Anunoby. I have been around my share so I know that things change. But I have good friends in Toronto and of course we stay connected. But there are not that many of my former teammates left in Toronto.

Of course it is not easy to watch them play in the Finals. (My feelings have been) up and down in the playoffs. I realized that I still am happy when they win because you know, they are my friends. Sometimes of course my thoughts wander in the direction “what could have been”. But then again — I know that it was a good step for me to go to the Spurs. After a so-so start I got good playing time, I developed a lot. I was able to play a good role in the playoffs. So the development here is very good for me and I have no bad feelings about the trade, which of course did surprise me last year.

Afraid of Spurs trades at the big position?

It is all speculation. I think that the core will stay together, there will be small moves.

Is this an important season contract-wise?

Of course it is a big season. I already can feel it. Training is intense, the Spurs want to know how I develop and that is just natural. It is a big decision for them and for me. I would love to stay with the Spurs longer and throughout this season. I will work very hard for that.

On next season with Dejounte Murray back:

Looking forward to have him back, we played together well in preseason and it was always fun to play with him.

On playing for the Austrian national team:

Of course I want to play again — this summer there is no window, but whenever I can I love to play for Austria.

On living in San Antonio:

I like it in Texas. Obviously I also miss Toronto. That is a big metropolitan and I loved it there. But I had a cool year in San Antonio, I found my place there, I found my restaurants and I feel great.

On helping his youth team in the future (the Vienna Timberwolves struggle financially):

Well yes, we talk, I would like to help, but I cannot tell you now in what way. But it would be a pity for that club to be relegated because of that. We will see what the future will bring.

On him making a youth camp in Austria for the kids:

I am nervous about that, there will be many kids, that will be cool days. I do not want to teach the elite stuff, it is all about basics, it is about the fun of basketball. I will be there coaching them together with other coaches — should be fun.

Many thanks to Andreas for the information! You can also check out this article from ORF regarding Poeltl’s press conference. It’s in German, but there should be a translation option. For me it was in the top right corner on Google Chrome.

Jacob Poeltl discusses his first season with the Spurs in Austrian interview
Source: Pounding The Rock